Let's get to those wave 5 objectives! 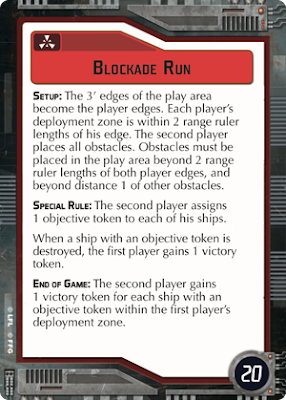 Blockade Run
Notes/clarification:
What kind of fleets should consider using Blockade Run?
You would think it would be fleets with numerous faster combat ships (like CR90s, MC30s, Raiders, and Gladiators) and flotillas and the like actually, you know, running a blockade. You'd be wrong though, sadly. The first big issue is if you're using an MSU-style fleet with at least one flotilla, you generally should be using Most Wanted or Opening Salvo instead. The second big issue is Blockade Run is an easy choice for a fleet with durable front arc ships like ISDs, VSDs, and LMC80s because it's harder for enemy ships to escape their front arc while fighting in a 3 foot wide hallway instead of a 6 foot wide normal board. Generally Big Heavy fleets that use Blockade Run aren't looking to prioritize scoring points from Blockade Run itself (they'll take it if they can get it, of course); they want the other benefits. Namely, Blockade Run traps the enemy fleet in a bowling alley against front-arc ships and gives the second player complete control over obstacles. This can provide an unexpected deployment benefit in that even though Big Heavy is typically outdeployed, the room for combat maneuvers around ships is halved, making it difficult for the first player to deploy and then move one of his ships to a place where at least one of the second player's ships can't attack back with its best arc when combat begins.

It should be noted that Blockade Run is similar to Minefields in that it can create non-games: there's a lot of room in the different deployment zones and if both players deploy and then maneuver too conservatively, it can take a while before combat actually happens (and in the most extreme example, it won't happen at all!). The important take-away from this is that it puts pressure on the first player to actually make the game a game. If the first player is camping his deployment zone too strongly and not really coming out, the second player can simply wait until the 6th turn to make a run for the deployment zone and win just through victory tokens or even just sit in his deployment zone and win by the second-player tiebreaker. That is not a very exciting game but it is a game the second player can win fairly easily.

What kind of enemy fleets are disadvantaged by playing Blockade Run?
It really depends on what kind of fleet is using Blockade Run (MSU versus Big Heavy), but overall, side arc ships like Assault Frigates can have a hard time sailing around problems in this objective due to the hallway orientation of the battlefield. If you can't handle MSU blitzing you and then running into the endzone for points or Big Heavy trapping you in a hallway and grinding you down with beefy front arcs, I'd avoid this one. I don't think it's a super-strong objective overall, but it has a tendency to be underestimated and overlooked. 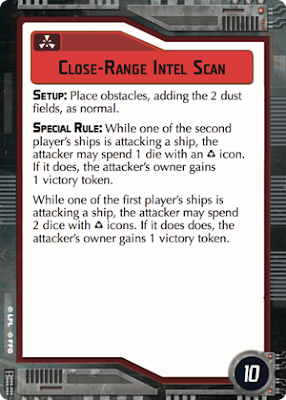 Close-Range Intel Scan
Notes/clarification:
What kind of fleets should consider using Close-Range Intel Scan?
The short and sweet answer is "fleets with accuracy-generating tech available on most of its ships" such as from Captain Jonus, the Home One HMC80 title, or H9 Turbolasers taken in sufficient quantity or the like. That's it. This makes Close-Range Intel Scan a rather narrowly-applicable objective, but that doesn't make it bad. Consider that with accuracy-generating tech, you will on occasion have (or can easily create) accuracy icons that aren't conventionally useful. Perhaps the enemy's brace has already been discarded or locked down by an earlier accuracy icon, or you can generate one accuracy but the opponent has a pair of the same defense token you want to go after (like the LMC80's double-braces or the MC30's double-evades double-redirects), or the attack is doing a small enough packet of damage that your opponent won't want to spend defense tokens anyways. In those types of circumstances, you can generate victory tokens pretty painlessly by spending your excess accuracy icon die. Your opponent, conversely, has a very hard time generating victory tokens for this objective at all - naturally generating 2 accuracy icons is much less common than generating 1, especially without accuracy tech, and far less likely to be in a situation where it's easy to spend both of them just for points rather than wanting to spend at least one for the regular accuracy effect.

Thus Close-Range Intel Scan is basically a source of extra points almost entirely for player two. The total number of extra points at the end of the game is unlikely to be over 100, but it's largely a one-way street: objectives like Contested Outpost still see a lot of play even though I rarely see a game end where Contested Outpost gave the second player more than a 60 point lead by the end of the game, and Close-Range Intel Scan in a very specific kind of fleet can easily do at least that without tying you to a specific obstacle or on-board objective token zone that your opponent can go after.

What kind of enemy fleets are disadvantaged by playing Close-Range Intel Scan?
Anything that can't generate lots of accuracy icons isn't going to be keen on playing against Close-Range Intel Scan, although the "meh" reputation of the objective may see it getting picked with some frequency before opponents begin to realize it is a one-way points street for a fleet designed with accuracy-generation reliability in mind. 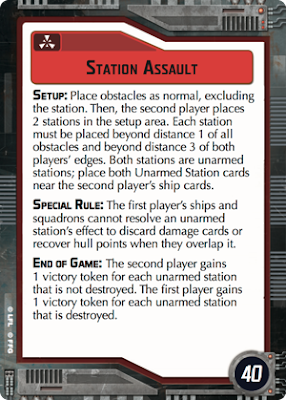 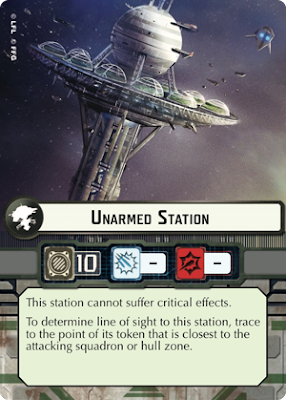 I'd like to write a bit more at length about the points-scoring element of Station Assault. Namely, it has two basic outcomes: either one station is destroyed and the players tie on Station Assault points or one player gets his way on both stations (intact or destroyed) and that player gets a hefty 80 point leg up on the game. Given the first player needs to get 10 points of damage into each station to destroy it, the first player needs to direct a lot more effort (and likely "wasted" attacks) into getting it his way than the second player. It behooves the second player to make it difficult for the first player to choose to attack a station for this reason; 10 points of damage isn't a huge number, especially when the station lacks defense tokens, but neither is it simple to do with little effort.

What kind of fleets should consider using Station Assault?
Station Assault is recommended to basically all the same kinds of fleets that like to use Contested Outpost. Specifically, more defensive fleets that like to hang out together near an area they can protect. In particular, you get extra mileage from an Interdictor's Grav Shift Reroute by using it to pull both stations closer to your table edge and further away from the enemy fleet. Just be sure to keep your speed down to force your opponent to come to you while you're still in range to defend the stations! If you get too far away from them then your opponent doesn't need to decide between attacking your ships/squadrons or your stations, he'll attack your fleet earlier and then overshoot to attack your stations later in the game.

The "default" method of Station Assault seems to be keeping the two stations close together so your whole fleet can get between them and the enemy fleet and dare the other guy to come into the bear trap. There's also something to be said for setting up the stations on opposite sides of the table and deploying to defend the one the first player sets up near: if the first player wants to deploy a ship or two on the other side of the table away from the main battle to knock over a 10 hull space station, that's not a bad trade-off at all.

Generally, Station Assault is perceived by a number of players as being a more "anti-squadron" type of objective and I can't really disagree with that. It takes away the station's healing ability for enemy squadrons and can create awkward situations for squadron-focused damage plans by either awarding the second player additional points or pulling enemy squadrons out of position and off enemy ships to go elsewhere and put damage into stations put into disadvantageous positions. A ship with Gunnery Team or an arc that wasn't doing anything anyways don't mind tossing some extra attack damage into a station, but squadrons really have better things to do most of the time.

What kind of enemy fleets are disadvantaged by playing Station Assault?
Similarly (again) to Contested Outpost, slower fleets don't like being put into the position of getting to point X and doing something about it. Fleets that are damage-poor or need to commit squadrons for the bulk of their damage are also in a bad place when it comes time to look for some spare damage sources to throw into a station. 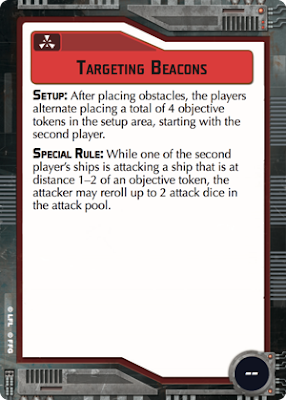 Targeting Beacons
Notes/clarification:
What kind of fleets should consider using Targeting Beacons?
Fleets utilizing both 1) one or more Strategic squadrons as well as 2) several combat ships with red dice in their anti-ship batteries can benefit from Targeting Beacons. That's a fairly narrow niche, similar to Close-Range Intel Scan in that the vast majority of fleets are going to look at this and give it a hard pass.

The good news is that a distance 1-2 radius of a Targeting Beacon token is a fairly wide footprint when Strategic squadrons can move it around a considerable distance. So long as your red dice ships can gang up on anything that wanders into the mobile kill zone, the 2 dice (or less) reroll effect can help alleviate the problems you get with fickle red dice rolling blanks when you need them the most and at closer ranges can be used for other fun reroll shenanigans like fishing for accuracy icons with blue dice or sometimes even rerolling black dice as well.

One final conciliatory note in defense of Targeting Beacons: although Most Wanted, Advanced Gunnery, and Opening Salvo all have more generally-powerful effects that are more straightforward to use, they also provide benefits to the first player (although reduced or at the choice of the second player) that can sometimes be turned back against you. Targeting Beacons only helps the second player. I'm still iffy on it in most cases, but you'll never be cursing it for betraying you by helping your opponent more than you; you'll only be cursing it for perhaps not helping you enough.

What kind of enemy fleets are disadvantaged by playing Targeting Beacons?
Targeting Beacons can cause some trouble for enemy fleets without sufficient fighter coverage to stop the Strategic squadron(s) from passing the objective tokens around to keep the rerolls going for most of the game. Anything that improves red dice reliability can overwhelm smaller ships that were largely counting on using evade tokens against the better dice coming their way and ignoring the occasional blanks only to find that there are not, in fact, occasional blanks happening much any more.