It's the final countdown article about objectives! 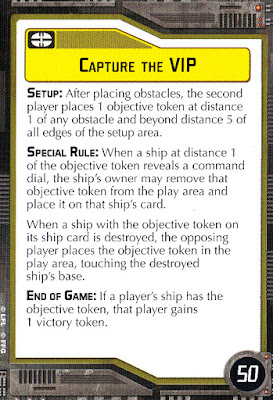 Capture the VIP
Notes/clarification:
What kind of fleets should consider using Capture the VIP?
Any fleet that has a ship that's okay with largely avoiding serious risks to its life is a good VIP-catcher. Typically this is a good role for a flotilla, but could also be achieved by a particularly strong ship that intends to operate on the flanks. With help from a Strategic squadron, you can even grab the VIP on the first round!

Capture the VIP should be compared to other yellow objectives that grant victory points for "game state" situations, such as Contested Outpost or Fire Lanes, as they're all looking to grant you points for your ships meeting certain criteria. In the case of Capture the VIP, it's whoever has the hot potato at the end of the game. For the other two, they're more positional (guard the station or farm the Fire Lanes targets) and resolved at the end of every turn. Committing most/all of your fleet to Contested Outpost or Fire Lanes can be a bridge too far for some fleets, but Capture the VIP generally doesn't require as much building towards. If you're using multiple Strategic squadrons, Fire Lanes is superior for most cases, but if you're only using one Strategic squadron, it makes for an easy VIP pick-up; that said, you can do just fine without a Strategic squadron with this objective, picking it up round two.

Be aware that the VIP is something of a high-stakes objective in that it's a flat 50 points for one player or the other. Fire Lanes and Contested Outpost can see player one later on gaining some victory tokens of their own to decrease the second player's advantage, but Capture the VIP is all or nothing usually, barring the rare circumstances where the VIP jumps out the airlock of a destroyed ship and just floats there for the rest of the game, it's going to be 50 points for one player or the other.

What kind of enemy fleets are disadvantaged by playing Capture the VIP?
I'm sure you're tired of reading this by now, but slower fleets don't like positional-style objectives (they're not keen on most yellow and some blue objectives for that reason). Being able to destroy the VIP ship and then claim the VIP for yourself requires some force projection and usually a decently quick ship. Sluggish heavier fleets just don't realistically have that.

Some bomber fleets can struggle a bit to pick up the token, given that many of their ships don't tend to like wading into heavy combat zones or chasing down errant flotillas. The squadrons can certainly assist in destroying the VIP's original ship, but after that retrieving him/her can be difficult, depending on the build. 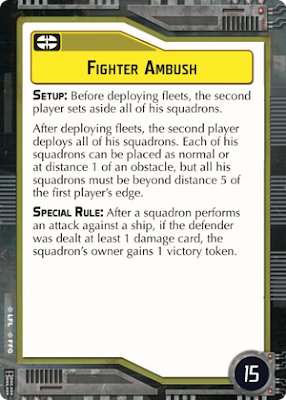 Fighter Ambush
Notes/clarification:
What kind of fleets should consider using Fighter Ambush?
Fleets with a heavy investment in squadrons that can damage ships benefit from this objective and basically nobody else. The main issue they need to work around is the fact that normally squadron-heavy fleets get a moderate to large number of deployments but when playing Fighter Ambush they will almost always be out-deployed. This isn't an insurmountable problem, but I'd definitely recommend that players using Fighter Ambush get some practice at setting up their fleet without squadrons so the resulting formation can still support their last-deployed squadrons in a variety of places; this gives you a lot more freedom to exploit the upside of the Fighter Ambush deployment special rule instead of only experiencing the downside.

What kind of enemy fleets are disadvantaged by playing Fighter Ambush?
Any fleet with poor fighter coverage is going to have a bad time playing Fighter Ambush. Once your ships' shields drop, uncontested anti-ship squadrons just turn your ship into a points piñata while they nickel and dime it to death. In situations like this, choosing Fighter Ambush is even worse than choosing Precision Strike (and maybe even Superior Positions) because the problems I presented above with starting squadrons too close to your opponent are largely removed when your opponent has minimal or zero fighter squadrons to fight back with; this allows your opponent to start hammering your ships first turn with squadrons. 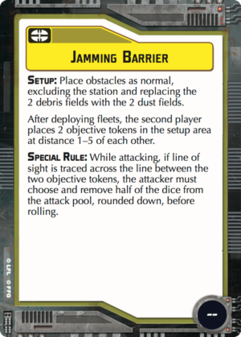 Jamming Barrier
Notes/clarification:
What kind of fleets should consider using Jamming Barrier?
In general, fleets that wish to avoid longer-ranged ship-on-ship combat (both coming at them and because they're not good at delivering it back) benefit from Jamming Barrier. This can include short-ranged knife-fighter fleets as well as squadron-focused fleets. The main problem when it comes to both of those fleet archetypes is there is already some yellow objective competition: the knife-fighter fleets can choose Hyperspace Assault, Capture the VIP, or even sometimes (be careful!) Fleet Ambush and do just fine. Similarly squadron-heavy fleets often prefer Contested Outpost or Fighter Ambush.

That said, in an environment where longer-ranged threads (like Vader Cymoons or Ackbar gunlines) are a serious concern for a fleet with squishier ships trying to avoid getting destroyed for as long as possible, a pair of dust clouds and a line of "your dice aren't so hot going through here" can be pretty great, especially if none of the other yellow objectives I mentioned earlier are a great fit.

What kind of enemy fleets are disadvantaged by playing Jamming Barrier?
Long-ranged gunline fleets are the ideal prey for this objective, especially if they don't have the maneuvering chops to get around/over the barrier or the dust clouds quickly. Fleets focusing more strongly on short-ranged attacks or squadrons generally won't suffer much against it overall, but clever use of the dust fields or setting up the barrier line just right can still pay off against shorter-ranged attacks. 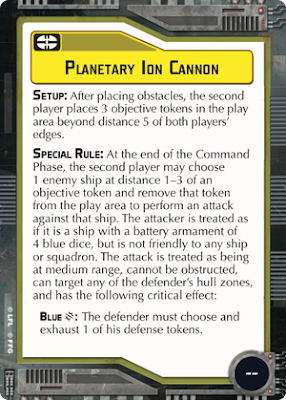 Planetary Ion Cannon
Notes/clarification:
What kind of fleets should consider using Planetary Ion Cannon?
Planetary Ion Cannon is primarily seen in fleets that aren't really sure what they want to do with their yellow objective. Because PIC can't hurt them, only the enemy, it's an easy add if you're otherwise unsure. It has some use as an anti-MSU objective in that small ships don't like taking extra attacks early and a horde of smaller ships frequently cover enough of the board that getting 2-3 PIC shots into them over the course of a game isn't too difficult. You can also see some niche uses with it when combined with other ship upgrades that interact with spent defense tokens, like Boarding Troopers (to spend the already-exhausted token[s] to discard them).

What kind of enemy fleets are disadvantaged by playing Planetary Ion Cannon?
Nobody in particular enjoys getting their ships attacked prior to the Ship Phase beginning (much less tapping out a defense token potentially) but MSU fleets particularly hate Planetary Ion Cannon because the attack made by the ion cannon often makes it substantially easier for the second player's fleet to destroy the hobbled ship that turn. With those 4 blue dice coming at a lighter ship, you're quite likely to cause some serious trouble for its shields and in many cases its defense tokens. A big ship can handle that (it doesn't like it, but it will be fine). For a small ship, it's often the difference between living until next round and potentially getting swatted down this round

In short, MSU fleets would generally prefer to avoid Planetary Ion Cannon. My own MSU fleets have grown to dislike it and would much prefer to see something that telegraphs my opponent's position (Fire Lanes/Contested Outpost) in the yellow slot instead.
Posted by Eric Taylor at 12/24/2020