In my earlier article on basic fleet-building, I mentioned 3 basic types of "skew" fleets: Big Heavy, Swarm/MSU, and Heavy Squadron. John and I have since written articles on dealing with those types of fleets (as well as more specific components of fleets that can be troublesome), but I've had some requests for articles in reverse: namely, some idea as to how to build and use those particular types of fleets. That seems pretty reasonable, so let's proceed with Fleet building 201, an article series where I'll cover some guidelines for building and using fleets based around those three basic archetypes. 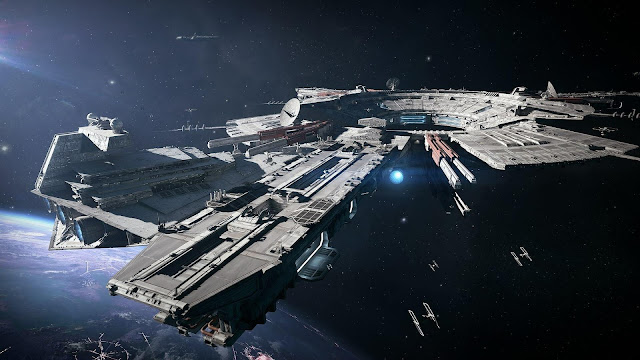 Before we get any further, I want to discuss why I consider those three options the basic archetypes for Armada: in short, it's about points and the value of asking hard questions. Let's cover points first: every fleet is given a set number of points (duh, of course) and ships are mandatory but squadrons are optional. This leads to basically three fairly extreme builds within those parameters: going lighter on squadrons but heavy on ships, which then begs the question of "is that a few big ships (Big Heavy) or is that many smaller ships (Swarm/MSU)?"; or going heavy on squadrons and then figuring out what to do with the remaining points for ships (Heavy Squadron). Skew builds also tend to ask the hardest questions, by which I mean "present a threat that the opponent needs a good 'answer' to or risk being disadvantaged." Take Big Heavy, for example, which is the most straightforward of the basic archetypes: Big Heavy benefits from the fact that larger ships offer more individually powerful activations and because damaged but not destroyed ships in Armada do not suffer any statistical detriment or give up any points at the end of the game, a heavy ship is the sort of thing that needs a substantial concentration of firepower to seriously threaten and underestimating it can be catastrophic. Effectively, Big Heavy's 'question' is "can you destroy my heavy ships in a time and cost-effective manner before they remove the credible threats from your fleet?"

Pure skew fleets, however, also tend to have the largest vulnerabilities, which is why they're often combined with elements of the other archetypes. Typically, due to points constraints, it's difficult to successfully merge all three archetypes into a cohesive fleet, but focusing on one archetype while minoring in another is common (or sometimes even double-majoring, to the complete exclusion of the third archetype). Think of it as something of a triangle, where you begin in one corner and then decide how much you want to dilute your core idea in order to include elements of the other two corners:
This means that even a fairly balanced fleet operating with a decent but not heavy serving of everything would find itself roughly in the middle of our example triangle - not a more heavily skewed fleet but one that includes some elements of the three stronger skew approaches.

So with all that said, I'm going to give some basic guidelines on the "undiluted" skew of each type but then also cover how to include elements of the other two, while still majoring in your chosen approach. Most fleets include elements of at least one other archetype to smooth over some of the inconsistencies of going too hard on their own shtick, and we'll cover how/why to mix them.

The original plan was to include everything in this article but it became clear rather quickly that the article would end up being extremely long. Therefore, I'll be breaking it down into articles covering each specific archetype, plus some permutations. The first article will be on Big Heavy, and it should be arriving later this week.