Okay, we're done with our wave six spoiler screaming and let's get back to the blue (navigation) objective cards! 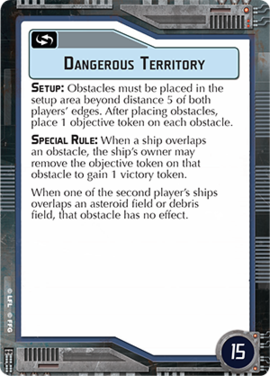 Dangerous Territory
Notes/clarification:
What kind of fleets should consider bringing Dangerous Territory?
Dangerous Territory is useful for an aggressive type of fleet, as you want to be able to grab your tokens early and threaten to snag any unclaimed tokens from your opponent's side of the table too. Fleets with numerous smaller faster ships make this threat more legitimate. Fleets with larger ships moreso enjoy the ability to not need to worry about obstacles so much, as they can get snagged on them from time to time and maneuvering around them at the very least is inconvenient. I would strongly recommend at least one small fast ship if you're taking Dangerous Territory as some opponents like to hide their obstacles around the back edges (as they don't intend to grab the tokens themselves and just want to inconvenience you). Being able to snag two tokens with a cheap fast ship can be worthwhile if you can spare that ship later in the game.

Fleets using Grav Shift Reroute (currently available only to the Imperial Interdictor) can have a fun time with Dangerous Territory by yanking enemy obstacles closer to their side of the table, which can set the Interdictor's fleet up to score up to 90 points unless the first player gets very reckless about charging into damaging obstacles to grab those tokens ASAP, which is its own benefit to the second player.

What kind of enemy fleets are disadvantaged by playing Dangerous Territory?
Carrier fleets don't much care for Dangerous Territory as it forces them to compete for the obstacles closer to the middle of the table faster than they'd sometimes like and they're typically lighter on hull than more generic fleets (as they've spent less on ships and more on squadrons) and so even less keen on eating asteroids to contest you on objective points. Perhaps even more importantly, you can hide your own ships quite conveniently in obstacles to obstruct attacks from bombers. Obstructed single die bombers roll zero dice against your ships and obstructed two-dice bombers are only half as effective, which can be extremely effective at diminishing the threat from bombers on crucial turns provided you deploy the obstacles and maneuver well. 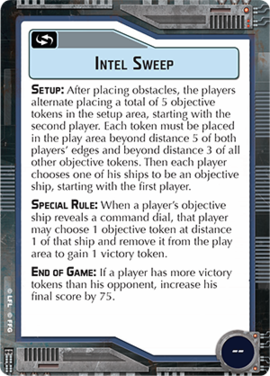 Intel Sweep
Notes/clarification:
What kind of fleets should consider bringing Intel Sweep?
Fleets should first and foremost have a ship in mind for the objective ship before including Intel Sweep. You can use a cheap small fast ship (like a flotilla or corvette - a Jaina's Light CR90A loves being the Intel Sweep objective ship) or a heavier longer-ranged ship (like an ISD or HMC80) that's okay with babysitting some tokens while maneuvering and lobbing red and blue dice in the early to mid game.

Rieekan enjoys Intel Sweep because assassinating his Intel ship won't stop it from picking up a token that round, which can still give him the win on the objective or at the very least usually let him gun for a tie.

The presence of even one Strategic squadron makes Intel Sweep a much easier objective to win as the Strategic squadron can push tokens closer to your Intel ship and away from an opponent's Intel ship- preferably it can do both at the same time (stealing a token your opponent was preparing to grab is deliciously evil).

What kind of enemy fleets are disadvantaged by playing Intel Sweep?
Defensive/slow fleets don't like playing Intel Sweep. They simply don't have the resources to stop the second player from walking away with 75 points in most cases and it can cause them to play against their strengths when/if they panic and overreach to go after the enemy objective ship. Any first player fleet without a Strategic squadron should give serious consideration before choosing Intel Sweep against a second player with a Strategic squadron. It's still winnable (or at least tie-able) but it's not going to be easy and you may very well be biting off more than you can chew. 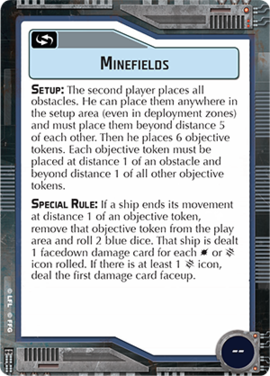 Minefields
Notes/clarification:
What kind of fleets should consider bringing Minefields?
Minefields is primarily appealing to fleets that want enemies to approach from their favored arcs and don't handle it well when enemies sneak out of those arcs (like a VSDs, Assault Frigates, etc.). Basically you're trying to cordon off enemies into a clear attack lane which is where your best arcs are all pointed. If the enemy diverts from this plan of walking into death they need to go through mines which are walking into death. Win/win, right?

It should be noted that Strategic squadrons love to haul mines around to cause trouble and Grav Shift Reroute can drag obstacles (but not mines) out of place, which can further complicate plans for getting through the pile of mines and damaging obstacles to the enemy fleet.

The problem is Minefields can result in some boring or weird games. If it's clear that charging right into a killing field is the only alternative to charging through mines, then your opponent may very well just not engage at all and fly on the other side of the minefield all game. If you rely on the mines too much (leaving yourself very exposed as you expect the mines to be a sufficient deterrent) then an opponent may charge through them anyways and just trash you, but if you don't rely on them enough it's kind of a wasted objective. In short, Minefields works well when an enemy is willing to do something foolish in order to engage on bad terms but it doesn't really have an incentive for them to do so like some other points-based objectives (like Intel Sweep) do. I don't recommend it because of that.

What kind of enemy fleets are disadvantaged by playing Minefields?
Slower fleets have a very hard time hopping the mines and smaller ships get scared of taking an awful face-up damage they can't really handle with their poor Engineering value.

I still don't recommend Minefields, though. As I said, it can be punishing but it lacks an incentive to really make the enemy put his fleet through the meat grinder so it can result in very dull "guess we're not doing much actual fighting and basically going for a tie" games, which aren't fun in casual play and aren't going to help you win any tournaments in competitive play. 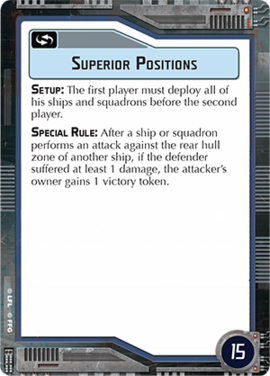 Superior Positions
Notes/clarification:
What kind of fleets should consider bringing Superior Positions?
Fleets with fewer deployments like Superior Positions because it allows them to avoid their typical problem of getting out-deployed by forcing the enemy to completely deploy his fleet first. In this role it's largely been replaced by Solar Corona, which ship-heavier fleets tend to prefer because they won't often be getting the victory tokens for Superior Positions. Thus the Superior Positions entry is going to be a bit short as it's still a good objective but is preferred mostly by carrier fleets.

Carrier fleets love Superior Positions (more than Solar Corona) because squadrons can consistently chase after and shoot enemy ships in the rear hull zone to rack up tons of victory tokens. Between Fighter Ambush, Precision Strike, and Superior Positions you have the "unholy trinity" of generic carrier fleet objectives.

Short-ranged ships don't like deploying "blind" as if they end up being on the outskirts of the battle it can take them most of the game to become relevant.

Fleets that are light on anti-squadron resources facing a carrier fleet take a double-hit from choosing Superior Positions (both getting deploy-screwed and hit up for lots of extra points by squadrons attacking rear hull zones) and will/should avoid it like the plague (if you're facing the unholy trinity, I'd recommend Precision Strike or Fighter Ambush instead).

Rieekan zombie ships can be turned into points piñatas by Superior Positions much like they can by Precision Strike and so Rieekan commanders should be careful about choosing Superior Positions and which ship they zombify if they do choose it..

Final thoughts
That sums up our review of the wave one blue objectives! We'll be getting to the yellow objectives later this week or early next week to wrap up all the wave one objectives. Let me know if you had any questions or comments!
Posted by Eric Taylor at 12/15/2020