Black dice: blowing up enemy ships for fun and profit!

Using black dice ships is one of the more difficult skill sets for newer Armada players to come to grips with (along with "how to squadron", but John's got you covered and then some on that topic). John and I have covered some of the elements on "how to black dice" in ship-review articles such as the Raider, Gladiator, and MC30 articles. We figured it would be useful to combine some of the all-purpose black-dice help into one article and given my love affair with black dice (its kind of my thing, just like squadrons are kind of John's thing) I volunteered as tribute.

Okay, so why try to use black dice (and their ships) in the first place? They're the shortest available range and getting enemy ships in short range can be a little tricky. There are a few very straightforward answers to that question:
In short, black dice make enemy ships explode.

The thing with black dice ships is that like all other approaches to using assets in Armada, you need a fleet that will support them. It's just more obvious with black dice when it's not working because due to their short range, they're prone to not working whatsoever in the worst case (meaning no close range attacks at all) rather than just working less efficiently (like a longer-ranged ship that has to settle with using its weaker arcs). So strategically (i.e. when building a fleet), we need to set up a fleet properly for our black dice ships to perform their best tactically.

Therefore, if you're looking to get the most use from black dice ships, it helps to include as many of the following in your fleet as possible:
Okay, so we're past the strategic part and on to the tactical part! What kind of fun tricks can we do with our black dice ships in a game?

1) Last+first
I mentioned this earlier, but the last+first maneuver is a solid bread and butter tactic for fleets leaning heavily on black dice ships.

2) Catching prey
Again, this one was mentioned above (we include strategic elements in order to provide tactical opportunities, effectively) and I provided an example of doing this in the Raider article:
Again, the idea is to set your ship up to "catch" enemy ships that must approach it and enter short range while doing so. You can do this capably even with more proactive black dice ships by setting up the gold standard "catching double arc"
"Catching" requires not only the activation advantage to wait out the victim but also a solid grasp of order of activation priority for both players. Keep an eye on what you can and cannot wait to activate or else you may be too clever by half and blunder a ship into a trap of your opponent's while waiting to spring on one him yourself!

3) Double-arc
Because your black dice ships generally get only a few shots at doing large amounts of burst damage, you want to bring as much pain as you can against your intended target. Double-arcing is a solid tactic to use in Armada overall but it's particularly strong when used with black dice ships as it will rapidly overheat defense tokens and can produce an activation that's more than twice as damaging as getting in a single attack. Gladiators and MC30s are the masters of the double-arc and I illustrated an example of a Gladiator cruising in with Engine Techs to set up a double arc in the Gladiator article:
4) Navigate constantly
Navigate commands are for my money the strongest default command in Armada and this is especially true with very maneuver-sensitive black dice ships. Success or failure can hinge upon whether your black dice ship can get into just the right position and manage its speed tempo to arrive on time (not a turn too early or late). In general, if you're not assigning navigate commands to black dice ships (especially the more aggressive proactive black dice ships) at least 3 out of every 6 turns of a game (and sometimes more!), I'd reconsider your approach.

Extra clicks of yaw from navigating help set up double arcs. Speed changes help you set up or avoid traps. Navigate triggers Engine Techs on Gladiators and Assault Peltas. A quick boost of speed (especially with a navigate dial+token) can help you jump past enemy ships hoping to punish you for beating down their friends. Navigating all the time makes your end positioning very difficult to predict, which is also important when your range is so short and your opponent's ships often don't have the same problem. In short, navigate commands are great and particularly so with black dice ships.

5) Ramming ships is awesome
Always remember that overlapping ("ramming") enemy ships is an option, as is leaving your ships in the flight path of enemy ships so they're forced to ram you and stay stuck in place. Overlapping can get that crucial extra hull damage into an enemy ship, but it can also allow your ship to "hit the brakes" and stay in a relatively harmless arc (like an Assault Frigate front arc or a VSD side arc or the like) for next turn. If you've got a durable reactive black dice ship (like a VSD), it can be great to keep an enemy ship pinned in place in front of you as it can't muster the speed to jump you and will be subjected to turn after turn of 3 red+3 black dice. ISD-Is are particularly adept at this "trapping" maneuver due to their size and decent (for their size) maneuverability, as I demonstrated in their article:
Don't forget that overlapping can be done intentionally (I've met some players that believe it's only possible to do so when there's no way out of it and that's incorrect), so you can intentionally ram other ships for any of the possible situational benefits I outlined below. The ISD in the example above sure could (especially with a navigate dial) try to shimmy around that Assault Frigate in a future turn, but it's much better intentionally ramming it and keeping itself in position.

Ramming can also be done to perform otherwise-illegal maneuvers, as you are allowed to overlap the maneuver tool if and only if your final destination results in a ship overlap and you need to move backwards along the maneuver tool. To be clear, your "original" destination still needs to be plotted following the usual rules, it's just that when there's a ship there you keep moving backwards along the maneuver tool until you find a place to land without a ship and at that point the rules don't care if you're overlapping the maneuver tool any more (just in case you doubt me on this one, go check out the rules reference guide, page 8, under "overlapping" and check the third bullet point). Anyways, this can set up some neat situations, for example: 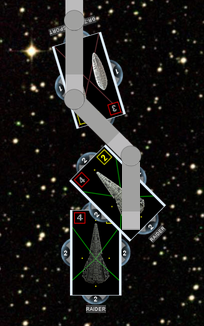 The Raider could move at speed 2 straight ahead to ram the GR75, but instead it Tokyo Drifts. It still overlaps at the final destination and so it moves back to the speed 1 joint and lands on the maneuver tool. This sets up a double arc for next turn: 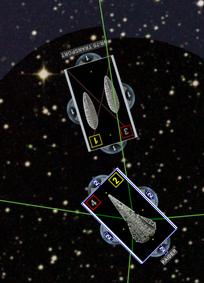 If the Raider had simply moved straight ahead and not abused utilized the options available to it through overlapping, it only would have only lined up a single arc on the GR75 next turn, it now has a double arc and is blocking off a lot of landing space for the GR75. Much better!

Final thoughts
With all the black dice thoughts largely in one place, hopefully this is a helpful resource for players looking to get some extra mileage out of their black dice ships. If you have any questions, as usual please let us know!
Posted by Eric Taylor at 12/18/2020