We've arrived at the final article of the wave one objective reviews, which will focus on the yellow objectives! Yay!

Notes/clarification:
What kind of fleets should consider using Contested Outpost?
Slower defensive-minded fleets prefer Contested Outpost or Fire Lanes (we're getting there next!) for their yellow objectives, as they both allow you to score a lot of points while you patiently wait for the first player to show up and stop you from winning - if the first player is taking his time, then all the better! What differentiates Contested Outpost from Fire Lanes is it plays better with ships that have strong front arcs, as you'll be moving forward towards/onto the space station to keep scoring points from it and your opponent will want to get to the space station ASAP, which incentivizes them to come at it quickly (into your front arcs). Contested Outpost is also immune to Strategic squadron shenanigans, unlike Fire Lanes. That's either a selling point or a downside, depending on your squadron composition.

Fleets using Grav Shift Reroute can yank the station deeper into their side of the table, making getting to it even harder for the first player. So long as the second player can keep hitting the station scoring button consistently (I'd recommend a cheap support flotilla slowly traversing the station in the rear of the table), it's really hard for the first player to contest prior to turn 4 due to the distance he needs to travel and the inevitable angry ships in the way causing problems.

Squadron-heavy fleets have mixed feelings about Contested Outpost. If other yellow objectives don't really tempt you, Contested Outpost is always a decent "I'm just going to sit on this unless someone stops me from winning" style of objective that can encourage your opponent to come to where all your bombers and squadron support are waiting. Conversely, the station not healing squadrons or obstructing can cause problems for your squadrons when the biggest source of obstruction and refuge for healing won't do its job. Be careful with taking Contested Outpost in a squad-heavy fleet for that reason.

What kind of enemy fleets are disadvantaged by playing Contested Outpost?
Other slower defensive fleets hate playing against objectives like Contested Outpost or Fire Lanes, as it forces them onto the offensive to stop the second player from winning and it's not something they do well.

Low-Command fleets (like numerous small ships) generally don't do a good job of contesting the space station and will instead rely on just destroying ships nearby so their Command 1 or 2 ships can get the points.

To a lesser extent, fleets with numerous side arc ships (like Rebel Assault Frigates and HMC80s and Imperial Arquitens Light Cruisers) don't much like Contested Outpost insomuch as they have a hard time actually contesting the space station; they'd rather move perpendicular to it than straight at it and would also rather attack at range than get too close. Just be aware that if you're sitting your station-guardian in range of a 2-3 side-arc-ship conga line of overlapping fields of fire death, you're going to have a bad time very soon and may need a backup station guardian.

Carrier fleets are generally reticent to devote one of their few combat-worthy ships to camping the space station until their bombers have mopped up most enemy ships nearby. This is a bit of a mixed bag as it means the second player tends to have a bit more time to milk the station for points but it makes any second player station-guardian ships the clear targets of bomber aggression.

Notes/clarification:
Brace yourself, bullet points are coming! This is the most complex objective in the game, so there's a lot to cover.
What kind of fleets should consider using Fire Lanes?
We survived! Congratulations! Oh, we need to talk more about Fire Lanes still? Bear with me, it's worth it!

Fleets that can play on the defensive and have longer-ranged stronger side arc ships love Fire Lanes. For this reason it was considered early on a "Rebel" objective, as no Imperial ships really met the criteria. Why all those qualifications? Basically Fire Lanes cares only about the number of dice you can put into tokens and the ability to hopefully cover 2-3 of the tokens with a single arc but without putting yourself at risk of landing on them. Front arc ships can contest Fire Lanes tokens with their front arcs but sooner or later they run a real risk of overlapping them as they move towards them and at the very least will slip past them with their best arc and have to make do with their mediocre side and rear arcs. Side arc ships like Assault Frigates can orbit the Fire Lanes tokens to keep pinging them for victory points while also presenting their other side arc to potential interlopers and obstructing shots at the tokens that would happen through them in some cases. It's quite good, and hopefully the example below clarifies how it works. 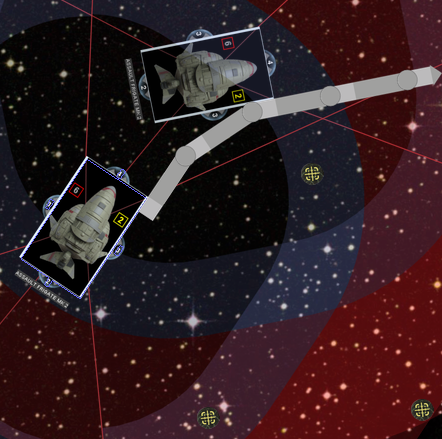 Here you can see that the first player has spaced the three tokens as far apart as possible into a triangle. The second player's Assault Frigate in its initial position can still attack all three of them (two at medium range for 4 dice, one at long range for 3) and after a speed 2 move it still has all of them covered in its side arc facing its table edge. At no point does it risk overlapping any of the tokens and it presents its other side arc towards the enemy. Way to be, little space potato!

Other than that, fleets with Strategic squadrons can reduce the strain of having to choose between moving your ships where they threaten the enemy better or where they earn Fire Lane points better by simply moving the objective tokens to the most convenient spot (also, preferably into your good arcs and out of enemy good arcs or under enemy ships/squadrons!). Strategic squadrons used with Fire Lanes are absolutely nuts and make an already-great objective for the right fleet even stronger.

What kind of enemy fleets are disadvantaged by playing Fire Lanes?
Similar to Contested Outpost, slow fleets don't like playing Fire Lanes because it can take them until turn 3 or 4 to start contesting the Fire Lanes objectives, which gives the second player a huge lead on victory points that can be hard to reclaim.

Shorter-ranged fleets can struggle against Fire Lanes simply because they have a harder time putting enough dice on the targets without overlapping them. The good news for most shorter-ranged ships is they tend to be faster, so they can get to the Fire Lanes tokens more quickly, but they run the risk of getting too far ahead of the rest of their fleet and singled out and destroyed. In general, I find shorter-ranged fleets generally prefer to try to destroy the second player's objective-pinging ships as quickly as possible and then try to minimize the relative points loss by devoting a cheaper ship (like a Raider or CR90) to weaving around the objective tokens, pinging them for only a die or two in most cases but winning through being uncontested.

Carrier fleets can't use any of their squadrons to contribute dice towards contesting the Fire Lanes tokens, and rely only on their unimpressive ship batteries to do so, which can mean they have a hard time contesting the objective tokens if any second player ships are nearby. However, it's similar to Contested Outpost in that it gives a first player carrier fleet's bomber squadrons a clear target - any second player ships orbiting the Fire Lanes tokens. Otherwise, it's a great objective to make carrier fleets squirm and particularly fun against the Rebel unarmed GR75 Transport flotillas because they can't contribute any dice at all.


Fleet Ambush
Notes/clarification:
First and foremost before we get to the swarm of bullet points, we should really clarify exactly where the ambush zone is. It's frequently misunderstood, but the below diagram spells it out precisely:
What kind of fleets should consider using Fleet Ambush?
My big problem with Fleet Ambush is you should never consider using Fleet Ambush unless you're 110% sure no opponent will get more benefit out of it than you will. That's a rather tall order all things considered. Specifically, there are two types of enemy fleets that love choosing Fleet Ambush: carrier fleets and short-ranged black dice brawlers, particularly Imperial fleets with a Demolisher Gladiator. Allowing the first player to attack and potentially destroy one of your ships on his first activation before you get to do anything means your objective choice actively diminished your odds of winning the game, contrary to its purpose. There's also the problem of a Raddus fleet using the ambush zone to get at least one ship very close to you and using it to drop off the ship he set aside, setting you up for a big mean ship in your face round one.

Otherwise, aggressive and/or longer ranged fleets generally prefer Fleet Ambush because it allows them to hopefully pounce on the ambushed ships and destroy them prior to dealing with the rest of the enemy fleet. You may notice that this also includes carrier fleets and small ship swarms with Demolisher. Effectively I'd recommend avoiding Fleet Ambush altogether (in our community it's gotten to a point where the saying is "friends don't let friends bring Fleet Ambush"), but if your fleet has a strong response to both "what if tons of bombers on the first turn?" as well as "what if Demolisher fleet?", then maybe. Just be very sure about it because it is for my money the easiest objective to turn around against the second player. Overall aggressive shorter-ranged fleets should usually choose Hyperspace Assault (for an MC30 or Gladiator, often) and carrier fleets should usually choose Contested Outpost, Fire Lanes, or Fighter Ambush.

What kind of enemy fleets are disadvantaged by playing Fleet Ambush?
Slower fleets can have a hard time getting the two halves of their fleet to reconvene quickly, especially if the second player litters the ambush zone with obstacles that the regular-deployed ships want to navigate around.

Fleets with little to no squadron coverage can find their ambushed ships eaten alive by bombers beginning on the first turn if they're not careful.

The important element is the Hyperspace Assault target needs to have the possibility of doing significant damage in one activation to make the threat real. It helps to also be durable enough to handle a shot or two by one of its intended victims prior to that ship booking it. Targets like CR90s and Raiders just aren't durable enough or hit hard enough to make Hyperspace Assaulting them worthwhile.

What kind of enemy fleets are disadvantaged by playing Hyperspace Assault?
Fleets with a strong preference for activating a specific ship first (example: Demolisher once it's lined up an attack run) will usually need to accept a "piece trade" when your Hyperspace Assault ship shows up and this messes with their usual hopes of grabbing a free kill from going first.

Slower and less maneuverable fleets can struggle to dislodge a persistent attacker who starts turn 2 or 3 in the rear of their fleet and remains there, chiseling away at their defenses.

Final thoughts
This wraps up our wave one objective reviews and we saved the most complex objectives for last. If you have any comments or questions, please don't be shy!
Posted by Eric Taylor at 12/15/2020