It's time for another upgrade review post, just in time for the Gozanti review article (it's effectively a two-fer)!

Fleet support upgrades are cards released in wave 3 that are used for support and denial purposes. I figured it would be easier to keep them all in one place for easy reference.
Bomber Command Center rules:Now that the rules are out of the way, Bomber Command Center is an absolutely clutch upgrade for fleets relying on multiple Bomber squadrons to deliver decent damage to enemy ships. It affects every friendly bomber at up to distance 5, which is a considerable distance. This can not only improve the average damage of your bombers but more importantly it makes the worst part of facing bombers even worse: the bombers will consistently do damage nearly every attack, rapidly overheating defense tokens and making a mockery of brace and scatter tokens. The damage improvement from a BCC should not be overlooked, though:
For red dice in particular it improves your odds of doing anything at all when attacking a ship from 62.5% to 85.9%, which helps a lot. It's great news for Bombers everywhere but it's extra good times for X-Wings and E-Wings, who go from "kinda anti-ship when necessary I guess?" to more all-round squadrons when assisted by a Bomber Command Center. With multiple-dice bombers the effect is less pronounced percentage-wise in increasing their damage (it still helps!) but it makes them extremely reliable due to being able to reroll the odd die that comes up blank or accuracy.

It's not too tough to keep your Bomber Command Center ship at longer-range of your bombers while orbiting the cloud and hopefully staying out of trouble. Be careful, though: faster enemy ships can pounce on you from a long range over/through your squadrons to cause trouble. This is a big issue if Bomber Command Center is on a squishy flotilla. Be careful. Boosted Comms is strongly recommended if you can't handle yourself in a fight. 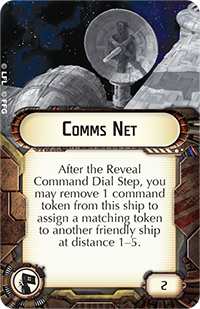 Comms Net is what I think of as the "default" flotilla upgrade. It's extremely cheap (only 2 points!), it's very flexible, and it allows the flotilla if nothing else to activate and help a larger ship with a free command token. For non-flotilla ships, it's not very appealing unless you've got a way to get command tokens easily, which you can then pass out to other ships as needed. Otherwise, durdling around the back turning dials into tokens for other ships on something like a Hardcell is a waste of a perfectly good light combat ship and it should look into one of the Resupply upgrades instead.

It helps to understand how exactly Comms Net works. During your Reveal Command Dial Step, you flip your dial over and immediately declare whether you're keeping the dial to spend later or turning it into a token. Once that's finished, you can use Comms Net. This happens prior to doing anything else (including spending dials/tokens for repair or squadrons). So your command 1 flotilla can see another ship in trouble, assign its command for the turn and then reveal, get the token, and pass off to the other ship. Way to be a helper, little flotilla!

It's important to remember that a Command 1 ship (like both flotillas) can only have 1 command token at a time so you can't "hot potato" a token over to a friendly ship with Comms Net while still keeping one for yourself. You can keep a dial for yourself while helping a buddy with the token of the same kind. For example, a flotilla with a navigate dial can choose to keep it and pass a navigate token from earlier off to another ship before proceeding on with its turn where it will spend the navigate dial.

Another fun trick with Comms Nets is doing a "water bucket line" where one Comms Net ship passes another Comms net ship a token for it to in turn pass on to a ship that was out of range of the original ship but not the second. Sneaky!

In general, fleets with Command 2 and particularly Command 3 ships like having token access from Comms Net helpers to help them do everything they'd like to do but are usually too busy. They're also fantastic at feeding token-hungry fleet command upgrades.

Jamming Field is a bit of a mystery. First things first, it requires some clarification:


The problem with Jamming Field is it affects all squadrons at range, including yours. There are ways to play around the effect by trying to pounce your squadrons on the enemy squadrons outside of Jamming Field range only to move your ship in afterwards, but it's a lot to play around and generally not worth it. Using a fleet command slot in a squad-based fleet on an upgrade that hampers both sides, requires the ship to be pretty close to all the action, and might not even do anything (if your opponent is running no squadrons or doesn't send his squadrons near you) is not a great call.

Munitions Resupply is the first new Clone Wars-era fleet support and it's got all kinds of new iconography on it. Rules time:

Munitions Resupply, like all the Resupply cards, will immediately draw a comparison to Comms Net. Why should I pay one more point to only be able to give out one kind of token? If you were planning to run your ship as a Comms Net slave and not much else, there isn't really much of a good reason. That said, Munitions Resupply is handy for ships that want to give out a lot of concentrate fire tokens once or twice during the game and then scoot off to do other things. With that kind of plan, they work great but usually moreso for Clone Wars era ships.

Parts Resupply is the repair version of Munitions Resupply, just above. Easy peasy. the commentary is the same: do you want a lot of repair tokens really quick and then off goes your fleet support ship to do other, more important things? Then use Parts Resupply.

Repair Crews is a fleet support upgrade I've generally been unimpressed with, with one exception. First things first, let's clarify how it works:


The main issue with Repair Crews is the timing. If a ship of yours is in danger and taking damage cards, it generally wants to activate early and run away before it gets worse. Keeping the Repair Crews ship at distance 1-2 of it to help can be a challenge in these circumstances, and the ship often doesn't have priority over the ship in question for activating. You can try to position the ship so it's one move ahead of the ship it wants to help but this can put you in trouble when you get too far ahead of the serious combat ships in your fleet.

That said, I've found Repair Crews occasionally useful with a Super Star Destroyer, as the ship is gigantic (it's easy to be at distance 1-2 pre- or post-activation), it isn't quite as worried about taking a few damage cards (it has 22 hull), and as the focus of a lot of enemy attacks, it enjoys whatever help it can get staying alive. I don't think I'd ever prioritize bringing Repair Crews over Comms Net in an SSD fleet, but if I'm bringing a second Gozanti it's a serious consideration.

Rules? Slicer Tools don't follow the rules! Except they do:
Slicer Tools when used at the right time can be absolutely devastating. Turning a carrier's upcoming squadron command into a different command can absolutely mess up your opponent's day. There are other fun possible uses for Slicer Tools (preventing ships from using navigate to change speed, or giving a ship out of range of squadrons a squadron dial, for example) but it's generally strongest at preventing carriers from getting squadron dials.

There are a few potential hurdles with getting Slicer Tools to work as consistently as one would like:

1) It exposes your ship to a significant amount of danger. Flotillas at medium or shorter range are drastically less survivable than flotillas at long range. Non-flotillas can handle the danger better but are still small ships, so be careful. You can't use Slicer Tools usually without exposing yourself to this "danger zone."
With good maneuvering you can try to avoid the worst of it, but the simple fact is Slicer Tools ships will nearly always be destroyed before their less aggro siblings. The sacrifice may be worth it, but it can still lead to some tough calls: use the Slicers once when it matters most and then die or try to sneak the Slicer ship around later to get use from the Slicers a few times, but after the big impactful round?

2) There are counters to Slicer Tools. On the Rebel side, Leia Organa (the officer) is a great Slicer Tools counter and all-around pretty helpful already. Skilled First Officers and any of the other "change your commands" officers (like Liaisons or the command-specific officers from wave 2) also shut down Slicer Tools. Grand Admiral Thrawn doesn't stop Slicer Tools entirely, but his Thrawn dials can't be sliced whatsoever - you can mess with the ship dials, but if it's an important dial (like squadrons, typically), Thrawn can issue it himself to make it untouchable. Methods to produce command tokens (like the Comms Nets, above) can also take some of the sting out of not getting the command dial you wanted by at least getting the weaker token effect.

3) Sometimes it just doesn't work out. If you're second player and the first player activates the ship you really needed to mess with this turn first, that's just how things go. If you're first player and messing with command dials isn't as important as activating an actual combat ship, then your Slicer Tools ship might not get its mitts on a great target that turn. There's a lot going on during any given turn and you can't always prioritize "messing with command dials" moreso than other activities.

4) Using Slicer Tools consistently requires a lot of repair tokens. If your ship wants to do anything else (navigation is the usual competitor here, but any other command can be as well), it can be hard to keep those repair tokens coming. Taking a repair token round 1 (to ready it) and round 2 (to keep it handy for when you need to ready it again) isn't too hard, but afterwards you can run into some trouble doing so once combat gets heavy. If you've got some outside means of keeping the tokens coming without a lot of extra hassle (like Grand Moff Tarkin), then you can be frivolous with your Slicer Tools use. If not, you'll need to be more circumspect because readying it isn't easy.

Slicer Tools can be extremely effective, but be on the lookout for counter-tech from an opponent (item #2, above). Ships with Slicers can cause big problems for the right fleets and many players have learned to bring something to push back a bit against command-screwage if their fleets are vulnerable to it. If so, identify how it works to get around Slicer Tools and apply pressure as best you can to make one-use solutions get used up quickly, or just apply pressure to secondary targets if your ideal targets are too well-protected.
Posted by Eric Taylor at 12/16/2020