The first small ship for the Separatists is the Hardcell Transport, a support-oriented vessel that can play helper robot or even act as fire support.

Both Hardcell variants share a good deal of overlap:

Basic usage recommendations
Hardcells are tough small ships, on par with heavier small ships like Gladiators or Peltas with one fewer total shield, but they're still small ships and don't last long against serious attacks from heavier combat ships or mobs of bombers.

With a wide front arc with 3 dice and 3 shields, it's best to keep your Hardcells pointed directly towards stronger opponents so they can't draw a bead on your weaker side arcs. Thankfully this isn't as hard to do as it is with Nebulon-Bs as you've got a wider front arc. If it's safe to do so, line up double-arcs against weaker opponents or opponents who have better things to do than mess with your Hardcell.

Thankfully you have a redirect token but it's still a little intimidating getting your side arcs focused on. A well-timed repair command can help regenerate and/or bring some shields around to keep you healthy a while longer once you start taking fire. Even a simple repair token will generate the 2 repair points you need to regenerate the one side shield or shuffle both rear shields to each side.

With speed 3, 5 hull, good defense tokens, and a pretty competitive cost, don't be afraid to ram other ships if the opportunity presents itself to do so safely. There's also nothing wrong with using a sacrificial Hardcell as a speedbump to slow down a heavier combat ship - with 3 shields in your front arc, 5 hull, and solid defense tokens, it's quite difficult to swat down a healthy Hardcell in a single activation. You may not survive the ram but if you sacrificed your meager Hardcell to keep an important enemy ship from getting where it wants to that's usually a good trade.

Titles
I'm happy to report they're both great.

That's it, it's a pretty straightforward card. Beast of Burden is a great teamwork-oriented title, giving your bigger ships a lot more durability by allowing extra uses of their defense tokens. The only complicating factor is it triggers on Beast's activation, so you can run into some order of activation logjams if you want Beast activating before the ships it wants to help. A canny opponent can take advantage of this fact as well, so try to encourage him to attack nearby ships early if you can.

Beast of Burden works fine on either variant but it usually has more synergy with a support-built Transport. 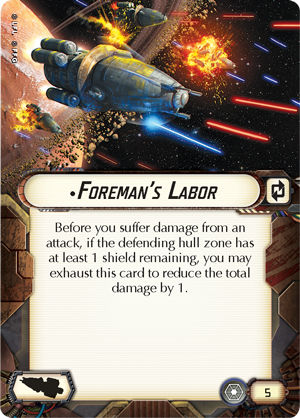 Foreman's Labor is another solid and straightforward title card that doesn't require much rules explanation. The only real item to note is that just like similar effects, the -1 damage occurs after damage is halved by bracing.

It also doesn't require a lot of discussion: it's a damage reduction title for a Hardcell you expect is going to be getting some unwanted attention, further amplifying its tankiness. For that reason it's a bit more appealing on a Battle Refit but it can work fine on either variant. Just make sure to keep your shields healthy whenever possible to keep triggering Labor's effect as much as possible.

Your basic Hardcell-class Transport comes in at a very competitive 47 points, has Squadron 2, and a weird assortment of upgrade slots:

2 red dice out the front isn't bad but without some dice fixing it's unreliable. Once you get into medium range you get a respectable 3 dice from the front and 1 from the sides and blue dice on the whole are pretty reliable. That said, it's still a support ship. It can contribute some dice at long range but it's mostly there to help out, and it's pretty flexibly arranged to customize it for differing roles. The important thing is to keep the upgrades cheap so you don't suddenly find your inexpensive support ship costs you 70ish points and is now much too expensive and not quite sure what it's best role is anymore.

Upgrades
Officers
With two officer slots, there's a lot of fun combinations you can get rolling here but you need to be careful to keep your costs low whenever possible or your points costs will blow up. It will also depend on what it is you want your Hardcell to do, exactly. There's nothing wrong with only using one, or sometimes even none, of the officer slots. Some basic options are:

Support team
Again, try to keep it cheap. Sure you could put Engine Techs on here but why?

Fleet support
I'm just going to point you to the fleet support article. Any of them can work with the right build. You've got your solid token producing cards like the Resupply options or Comms Net as well as Slicer Tools and Bomber Command Center. We'll explore some more options in builds.

Builds
As a reminder, I tend to provide what I consider to be the barebones requirements of a build. You're welcome to build further off of it but be careful about that points cost.

Slicey Bot
Slicer Tools, Tikkes
This build is very simple: you run around using Slicer Tools like a maniac. You just set your dials to whatever command you want to do all game while Tikkes keeps providing you with repair tokens to ready Slicer Tools or repair yourself a bit should readying Slicer Tools be unnecessary. You can add some more peripheral upgrades if you like but be careful about getting too expensive. Foreman's Labor, for example, helps keep your annoying Slicey Bot alive, as do support teams like Medical Team or Auxiliary Shields Team. The extreme option is Engine Techs to give you the option for speed 3+1 Slicer Tools range but it gets pricey so I generally wouldn't recommend it.

Baby's First Carrier Bot
Flight Commander, Fighter Coordination Team, Bomber Command Center
This build wants to command squadrons and that's it. Nothing wrong with that. I'd be tempted to sneak Tikkes on there as you'll want to mainline squadron commands from round 2 on in most cases and he'll provide easy access to repair or navigate tokens when you need them and worst case he'll give you a squadron token for commanding 3 squadrons. Generally this Hardcell wants to be commanding squads as much as possible and buffing a cloud of Hyena Bombers with its Bomber Command Center.

This Hardcell passes butter command tokens. It can certainly provide some fire support and do other duties, but it mostly just passes butter command tokens.With Tikkes, the Butter Passer Bot gets to enjoy a full-strength dial for itself, making it a mixed-role Comms Net and fire/squadron support ship rather than purely a flotilla-style Comms Net slave. I also prefer to get Beast of Burden on this build as when points allow for extra helper power.

Bandage Bot
Wat Tambor, Tikkes, Projection Experts
This is like a wacky version of the Medibot Wat and Projection Experts build from the Munificent article. Your Engineering value isn't as high as a Munifcent but you can pack an extra officer aboard for shenanigans. In this case, you're looking to do repair commands as often as possible to shuffle shields from other ships off to more important recipients. When in doubt, you can use your own shields for this purpose without using Wat to swipe them from elsewhere. You can use Tikkes in one of two ways: either your Bandage Bot is focusing on repair dials to keep fueling Projection Experts and so you don't mind setting the Tikkes Train to repair while Tikkes provides tokens (maybe extra repair tokens, maybe whatever else you need) or you want the Hardcell to focus on something else (squadrons, likely) while Tikkes keeps providing repair tokens to keep Projection Experts running. One way or the other, once a fight gets started, Tikkes is helping you keep Projection Experts firing all game long and Wat will be doing his thing to help.

You've got some good options for fleet support upgrades: Comms Net is a cheap option if you anticipate you'll have the odd extra token from Tikkes you want to hand out. Parts Resupply is great for doubling down on your "team healer" job and can help make up for the shields Wat steals from other ships. Repair Crews I'm iffy on in general but can be useful should you find you've got more pressing problems with faceup damage cards than shields, just be mindful that it consumes the entire repair command to use it.

The Battle Refit differs quite a bit from the Transport variant, adding up to the following differences:

It's a lot to take in all at once. In short, you're mostly paying for better flak and better combat stats but you're losing out on a lot of the support options. Enhancing those combat stats gets pricey - it's nice having the more combat-oriented upgrade slots but if you fill them all with serious upgrades then you're really better off just scrapping the entire thing and restarting with a Munificent. That said, a Hardcell Battle Refit's front arc is just as good as a Munificent's side arc (and better than a Munificent front arc at long range), so these angry silver mangoes can efficiently contribute in combat, you just need to keep an eye on the bottom line.

Upgrades
Officers
Nothing new here to report compared to the Transport and my default recommendation is "don't bother unless you have a good reason to fill this slot."

Offensive Retrofits
The Battle Refit is in a bit of a weird place here - a lot of the cheaper offensive retrofits are squadron-oriented and the Battle Refit just isn't made for squadron commanding. There are still some upgrades worth considering but at the moment this isn't a super competitive slot and in general I'd recommend you leave it empty.

Defensive Retrofits
These can really add some extra toughness to an already tanky-for-its-cost ship, especially when combined with Foreman's Labor. In general, I feel like most defensive retrofits aren't meant for small ships and are priced too high for something like a Hardcell, but there are a few options if keeping this specific Hardcell ticking is important to you:

Turbolasers
Here's where it gets a little weird. You've got several options but there's no easy cheap ones without a downside. You can leave this slot unfilled provided you've got some external dice control like Intensify Firepower or Kraken or the like helping you out, but otherwise it's a bit of a crapshoot with red dice.

Builds
The short truth of it is that I'd consider one upgrade and then stop unless you've got a good reason to keep layering on the upgrades. It's not that the Battle Refit is a bad ship - it's pretty affordable durable little fire support mango, honestly - it's just that the more upgrades you take the less competitive the Battle Refit looks compared to a Munificent.

With something like an Intensify Firepower Providence Carrier and/or your commander (Kraken or Trench who is focusing on concentrate fire, for example) providing external dice-fixing, you can make a pretty decent argument for fielding the Battle Refit Hardcell with no upgrades at all. There's no big combo element to unlock here, so I won't be listing specific builds like I did with the combo-tastic Transport as the Battle Refit is pretty Build-A-Bear in terms of upgrade choices.