Tips and tricks: inside turns

This is the first in a series of short articles going over some of the basic things you can do in a game of Armada and, when possible, giving the terminology or at least slang term for them as well. Each article aims to focus on just one small element, so they shouldn't be lengthier treatises (like, say, my "how to use black dice" article) but little bite-sized articles. Many of these topics have been covered briefly in other articles, but having their own dedicated space instead of hiding them in places (like for example I mention inside turning in my Raider article) makes them more visible and easy to find. Anyways, let's get to the point, then:

Pictures help. So for example, this is a Raider at speed 2 making a "regular" outside turn:

And here is a Raider at speed 2 making an inside turn: 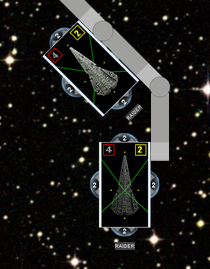 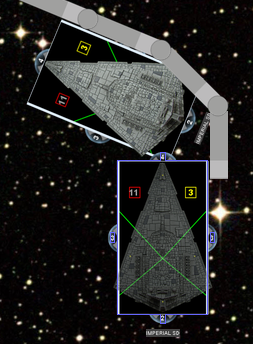 Above we see a Jerjerrod-aided ISD trying to do a speed 3 inside turn but the second joint has been clicked in once to the left and it results in the ISD landing on the maneuver tool. This is an illegal maneuver. 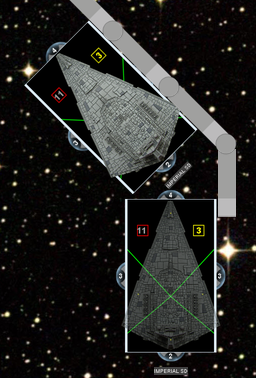 Here we see the maneuver done correctly and as you can see the ISD fits just fine at the 3rd joint without landing on the maneuver tool.

Inside turns can be extremely helpful for changing direction without moving forward as much as you would when doing a conventional outside turn. For example: 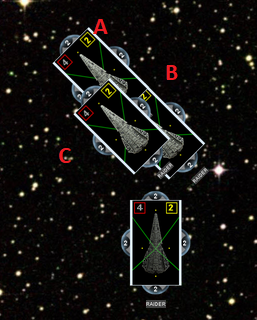 We can see from the above example that in terms of space moved, the inside turn allows the Raider to fake being "speed 1½ ," but it also allows the Raider to turn a bit more tightly to the left. In the right circumstances  this can make a substantial difference and it doesn't require a speed change.

There are some other maneuvers that use elements of the inside turn to decrease distance moved while remaining the same speed or to turn more sharply within the space provided. The only one that to my knowledge has a name is the Tokyo drift:

Quite simply, a "Tokyo drift" is done when a player wants to move his ship more or less straight without changing its current speed but would like to decrease how far the ship actually moves. This is done by simply clicking the maneuver tool once or twice on the first available joint to the inside of the ship and then clicking the next joint back the same amount. Let's bring back our friendly Raider to demonstrate: 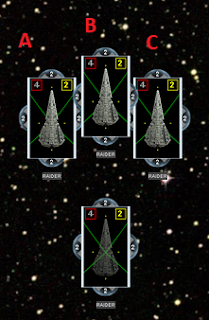 From the same starting point with a speed 2 Raider...
You can see the drifting Raiders didn't move as far as they would have going straight ahead and also juked a bit to one side or the other. Both of those elements can be handy in the right circumstances. You'll note that less extreme (one click) Tokyo drifting will produce reduced benefits but can still be helpful.

Otherwise, inside-turning- and Tokyo-drifting-style tricks can be handy for tighter turns, but no names exist for the specific movements. The final example I will give you is something Imperial players can pull off with Moff Jerry and an ISD or Rebel players can do with Madine and an LMC80 or MC75. Both cases need navigate commands, of course. 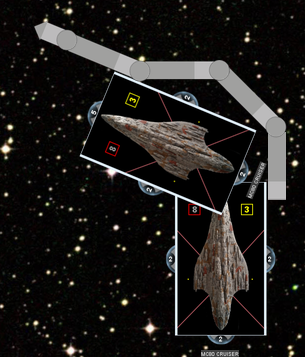 By using 2 clicks to turn towards the ship (in this example, the left) at the first two joints and the final click at the 3rd joint to kick the rear back out away from the maneuver tool, your large ship performs an extremely tight repositioning maneuver through the magic of knowing how to legally use your inside turning potential.

Final thoughts
This concludes our first tips and tricks article. If you had any questions or recommendations for subjects to cover in future installments, please let me know!
Posted by Eric Taylor at 11/05/2018