So I've had a change of heart in Wave 6 with a few things.  Namely, I've had a change of heart about getting Sato to work for you.  He's not the EASIEST commander to work with (I will fully admit that some of this may be my inexperience with him), but he can be life-changing if you do him right.  That is one mighty big if, but let's get into it.
The Card!
So, his ability means that if you get a squadron near a ship, you can throw different dice.  Better dice! STRONGER dice! Meaner dice!

Remember, though, only 2 dice get to change (though you CAN con-fire in other dice of whatever color afterwards!).  You can't change your whole output of dice, just two.
You also need to have a squadron within distance 1 of a ship.  I imagine a lot of this reason is because in the Rebels TV show, Hera and Phoenix Squadron keep hitting ships (And to be fair, losing pilots....).  As soon as you lose your squadrons, you lose your Commander's ability.... almost like Konstantine and medium ships!  Protect your squadrons and make sure you're not wasting them for your attacks.

The best reasons to play him are that he makes your ship attacks stronger.  Black dice have a better expected damage output (1/dice) than blue dice (0.75) or red dice (0.75), so you're likely going to want to switch whatever 2 you have FOR black dice (makes sense, especially with everything you can do with crit effects from black dice and all).  Relatedly, you can also change different colored dice to blue dice when you're hunting flotillas, as blue dice are the best chance of getting accuracies to lock down their Scatter tokens.  The less guaranteed but actual reason you're bringing him is that you can use different ships to trigger APTs/ACMs from long range.

My problem with Sato before Wave 6 is this: if you bring a ship that you can't put Ordnance Experts on (or get a reroll of some sort...), any black dice you roll (and for the most part, like I said, you're going to want black dice) are entirely dependent on your roll/defense tokens.  We'll talk about mitigating some of this in the Builds/Common Ships section below, but it's always seemed to me to be a difficult setup to just get 2 black dice in place of your normal role.  No lie, a CR90 rolling 2 black dice out the front and 2 out the side with a concentrate fire order is great! Sometimes it rolls 8 total damage! Sometimes you roll 2 total, and you curse the fact that you didn't put TRCs on it and play a different commander instead.  The downside to Sato is that a lot of the cheaper ships with turbolaser slots have ways of fixing red dice turbolasers, but no way to fix black dice.  We'll get to that below, too.
There's also the issue I have where an Evade token just sends that solitary black hit+crit right out the airlock, which is... frustrating to play against, that's for sure.  The further downside is that most of the Rebel ships (Everything but the larges basically) have an evade, as does every small ship in the Imperial fleet.  Do your opponents use small ships in their fleets? They DO? Well who would have thought that would happen, making Sato's job slash landing crits harder?
In order to get your black crits to trigger, you either need to have more than one black crit in the pool (so they can't evade both of them away) or you need to eliminate/overwhelm their ability to evade or contain the damage.  It's really not doable to guarantee more than one crit in the pool (heck, on the Rebel side I can't even guarantee ONE), but more dice is usually a better option.  Opening Salvo to add in 2 more black dice for potential black dice crits is the STRONGEST way to add in more dice from all of your ships to get those crits to trigger (it does have its own issues, of course).  There's always Disposable Capacitors or concentrating fire, too, which all add in MORE dice.

If you're trying to overload the defense tokens (especially that Evade), focus your fire on 1-2 ships at a time.  Don't splash your damage around on several ships, it's not going to do anything for you when they just evade it repeatedly.  Hit the same ship multiple times so they either need to discard their evade token or start taking crits and dying faster.  Overloading the token is a better plan in my mind than trying to have 1 dice throwing for the black crit and one throwing for the blue accuracy.  The more dice you throw at one ship, the faster it explodes.  This advice helps even more with big whales you want to shoot, as most of them lack Evades.

I will also admit that it gets aggravating when you roll a black dice and either get a blank or just a single hit.  I know we all WANT the black dice to come Hit+Crit every time, but that's not how they work (short of microwaving your dice.  Don't..... don't do that).  So you really can't tell if he's helping you as much, what with 4 of the red dice sides (the 2 basic hits and the 2 crits) being of equal or better value at hitting ships and 6/8 blue dice sides the same.  The thing you have to keep in mind is that you have a better chance of getting damage out of the dice you're rolling (6/8 black dice sides have stuff, which is better than the 4/8 red sides and equal to the 6/8 blues), especially if you're rolling a LOT more black dice.  With Ordnance Experts or other dice fixing upgrades, you have a better chance of damage being rolled.  Not crits, as 1 or 2 dice isn't enough to guarantee anything, but straight damage, crits just add to the value.  He's not as immediately able to tell how useful he is, but if you can get Monty Sato's Flying Circus going, it'll start to sing and you'll be blowing apart ships in no time.  Just give him time until you start playing him well.

He is good at some whale hunting, as VSDs/ISDs don't have evade tokens.  Keep in mind though that whatever medium/large ship you're attacking is both probably coming forwards toward you and is probably REALLY not happy that you keep critting on him.  Get ready for the end of Reservoir Dogs with your ships and his.  Repeated ACM crits into the front of an ISD take it out fast, but SSDs are another matter entirely.  Especially with Damage Control Officer as well.

Ships
Take ships that can trigger black crit effects.  Hammerheads, MC30s, the Ordnance MC75.  There's options for other things, but you're taking an expensive commander with a skewed ability in order to trigger black crits at red range.  If it doesn't do that, you generally don't want it.  A Pelta in the back supporting the rest of the list or Salvation throwing potentially crazy damage aren't bad either, but if you notice, most of these ships aren't great with squadron pushing extensively.

Fleet Building
Before we talk common SHIPS, we gotta talk common squadrons.  Sato's ability is based around squadrons, so only taking 2 of them is dumb.  You're going to need at least 4-6.  The squadrons you take AREN'T there to do significant damage to your opponent's ships, they're there to exist as spotters, letting your SHIPS roll the crits and do the damage.  See my Monty Sato's Flying Circus like 3 paragraphs above.  They can CONTRIBUTE, but if you're taking a bunch of bombers and Yavaris, congrats, go save 7 points and play Dodonna (or find 7 more and play Rieekan...).  Dodonna helps squadron crits do better damage, Rieekan helps your Aces stay alive, and Sato helps your SHIPS do better damage.  Note the distinction there of who does what and why you don't really want to overinvest in squadrons for a Sato list.  Generally you end up with around 80-100 points or so in squadrons.  Which means, I'll point you towards the MFC section of squadrons.

You'll usually end up with squadrons with scatter tokens (Tycho, Shara, Ketsu) to prevent damage or those with a good chunk of health and speed/rogues (Dash, Han/Lando, Hera/VCXs) in some fashion.  The rest of the list is ships; all with the same black critical effect.  All your ships want either ACMs or APTs, and they both have different reasons for inclusion.  See Eric's black dice article or the linked Ordnance upgrade article for more on these topics.  One flotilla to pass tokens or push your squadrons as needed isn't a terrible idea, but the more ships NOT using Sato's ability, the harder your list is working to get decent mileage out of your commander.

The one individual bit we need to also address is the Rebellion in the Rim squadron Malee Hurra.  She seems tailor made for Sato, if it wasn't for the fact that she has to be engaged by maximum one squadron to trigger.  Grit helps with that, of course, but it's still a very combo-dependant engine.  When it works, it really works, but when it doesn't, that's a GOOD quantity of points invested in a combo that isn't firing (which has to get frustrating).  That's not me saying "don't take this" so much as "be aware of your own limitations and what can happen in a game, along with how to make SURE she's going off." Obstructing her on obstacles helps, yes, but that also means she isn't firing her full 2 blue dice into a ship.  And what do you do if Sloane? If you feel lucky, give Malee a spin. 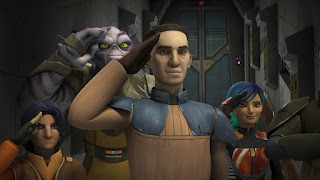 Sato is a Commander that I will fully admit I haven't figured out yet.  His ability is good, it just takes a bit of time to set him up before you can start knocking down Imperial ships.  With the arrival of the Hammerheads (just like in the show!), I aim to try him out a lot more and see what I can do to get him to work for me.  A lot of this post will get updated as Wave 6 and 7 go on and I try to get more experience with him..... but Leia is calling me, too.  Well, I INTEND to get more experience, haha!
Posted by geek19 at 12/19/2020