I continue my wave 2 Imperial squadrons reviews with the Aggressor Assault Fighter or, as it's known around here, "the space tick:" 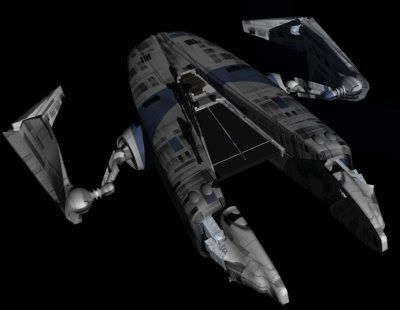 The Aggressor is a 16 point chunk of squadron that upon its arrival in wave two was considered something of a "fix" for Imperial players that didn't like running TIE Fighters. For the cost of two generic TIE Fighters, the Aggressor doesn't need squadron commands, has enough hull to handle getting pounced on (and gets Counter 1 in those circumstances), and does okay versus ships with a single black die (75% chance of 1 damage). In short, it seemed to be a more multi-role squadron (don't get me wrong, it's still focused on anti-squadron primarily) and required less support from ships - not superior to TIE Fighters, just an alternative for those who really didn't like them.

Time hasn't been kind to the Aggressor, I'm afraid. When it comes to multi-role generic Rogue squadrons, the Rebel YT-2400 absolutely outclasses the Aggressor - for the same cost, it gains +1 hull and +1 speed at the cost of Counter 1: I would take that deal absolutely every time were I given the opportunity as an Imperial player. It also gets outclassed within the Imperial family as a durable somewhat-multi-role squadron; for the same cost, TIE Defenders make a mockery of Aggressors - although they lack Rogue and Counter 1, they gain Bomber (same average anti-ship damage but crits counting helps), 1 more hull, 2 speed (which is huge), and an overall better anti-squadron attack (a bit worse against scatter aces). Overall that it's a tough sell for the Aggressor. With the introduction of the Gozanti Cruiser in wave 3, you can also run 2 TIE Fighters and one Gozanti for only slightly higher cost than 2 Aggressors (39 points for the Gozanti + 2 TIE Fighters; 32 points for two Aggressors). The TIEs+Gozanti combination has the benefit of being two deployments (instead of one), one more ship activation, and the Gozanti can contribute to flak and/or light anti-ship attacks to make up for anything the TIEs would lack compared to the Aggressors directly.

There's also a bit of indirect competition for the Aggressor from the wave five VT-49 Decimator squadron: both are speed 3 Rogues with Counter 1 and equivalent anti-squadron (4 blue vs. 3 black favors the black dice except against scatter aces) - the Decimator gains 3 more hull and doubles its average damage against ships (1 black die = 0.75 average, 3 blue dice = 1.5 average damage) at the cost of +6 points and gaining Heavy. Worth it? Depends on your fleet, but if you wanted to sprinkle in some multi-role Rogue squadrons, Decimators generally fit the bill better.

Another stumbling block for the Aggressor is speed 3. In a Rebel fleet, speed 3 is no problem. In an Imperial fleet, nearly every other squadron you bring will be at least speed 4. When your anti-squadron firepower is lagging behind your other squadrons, you've got a recipe for frustration. The other speed 3 or less squadrons are similarly expensive (YV-666s, Firesprays, VT-49s, Lambda Shuttles) and don't like other expensive squadrons competing for space.

In a first for my Imperial articles, I can't really recommend running Aggressors. There are just better options for similar points costs. Aggressors' main benefit is being Rogues, but they don't even stack up equivalent to their Rebel counterparts, the YT-2400s. Had they been just a bit cheaper (15 points?) or been speed 4 or hull 6 or some such, I might be singing a different tune.


It's time to take back everything bad I said about Aggressors when it comes to IG-88: the dude droid is swell.

For +5 points over a generic Aggressor, IG-88 gains:
Suffice it to say I feel like for 5 more points IG-88 gains an awful lot over a regular Aggressor and becomes almost an entirely different squadron. He's worth bringing along when you've got the points and want some additional A-level anti-squadron muscle but you don't want to command it (similar to his bounty-hunter buddy Bossk in that fashion). He's particularly appealing when give him some helpers to go after otherwise-safe squadrons.When combined with other means of getting around Escort (Mauler Mithel's instant-damage effect, Saber Squadron's Snipe 4, Colonel Jendon giving IG-88 or Saber Squadron an extra attack), IG-88 can play a crucial role in removing crucial support squadrons.

Don't forget that due to being speed 5 and Rogue, it's not uncommon for IG-88 to be able to get in a first-round attack on enemy targets that move up during the Squadron Phase. You may not necessarily want to do this (such as if you're lining him up to attack a specific target round 2 and don't want to get him engaged early on), but it can be quite useful as his threat range is substantial. If you're going to use IG-88 to attack an Escort-protected squadron, I recommend using a squadron command to get him in there as early as you can on that turn: you don't want an enemy squadron to get activated and engage him, ruining your plans, all because you wanted to rely on Rogue all game.


For the same +5 points as the other IG-88, IG-88B gains:
Let's talk about the Death Blossom:
So all that said, the Death Blossom isn't that easy to pull off but bears mentioning because if you can do it, it's pretty sweet. Keep Woldar nearby for that extra oomph. That said, though, IG-88B is worth considering because he's effectively a Counter 1 Rogue TIE Defender with one less hull, a scatter token, and Death Blossom for +5 points. That's not bad at all.

Short version: everything is better with an assassin droid.