On to the 6th of my 7 total objective articles! 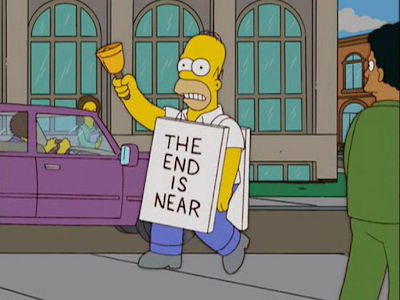 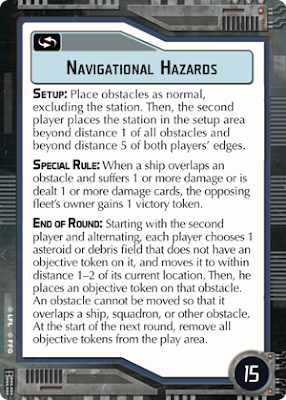 Navigational Hazards
Notes/clarification:
What kind of fleets should consider using Navigational Hazards?
There are a few options that make including this objective in your trio more appealing:
Otherwise, there's not a lot to say. It's a not very serious objective that's mostly there for fun and it's notable that when you can actually get it working it's an objective that not only puts damage on enemy ships but also gets you victory points. The problem is generally players will prioritize moving obstacles away from their ships first and then mess with enemy ships second, so the obstacles have a tendency to float away from trouble most of the time. If you really want to have fun scoring points while causing trouble with obstacles, I'd strongly recommend Infested Fields instead.

What kind of enemy fleets are disadvantaged by playing Navigational Hazards?
Basically the inverse of fleets that want to bring it: slower, less maneuverable fleets are going to have a bad time because placing obstacles in their flight path is easy to do and difficult for them to avoid; this will produce a lot of victory points for player two and a lot of damage to them. 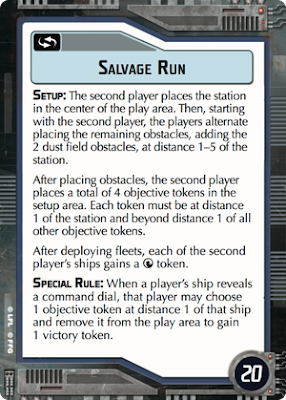 Salvage Run
Notes/clarification:
What kind of fleets should consider using Salvage Run?
The area around the station can get rather cluttered, and you'll want at least 4 ships that can grab all the tokens on round two without smashing into the negative obstacles thrown in the way, so this objective plays best with fleets using 4+ small ships, most frequently MSU, which can also appreciate the dust cloud coverage on the way in. Some MSU/squadron-heavy hybrid fleets can also use it for this reason (lots of obstacles to hide ships behind and a nice centrally-placed station for squadrons to work around), but they need to be careful to not put too many ships in one place and expose them to enemy attacks and a good reason to not be using Superior Positions (or some other objective) instead.

What kind of enemy fleets are disadvantaged by playing Salvage Run?
If your ships can't go speed 4, get teleported in (like Raddus), or use a Strategic squadron or two to pull a token away at the top of round two, you're playing Salvage Run 80 points behind and your opponent gets free navigate tokens. Some fleets also really hate those dust clouds (usually longer-ranged fleets, but they can be cleverly used in other ways as well).

If your plan is "go speed 4," (or speed 3+1 with something like Engine Techs or whatnot) I'll reiterate what I said above: be careful. You're blazing at maximum speed into enemy territory and I've seen ships get in way over their heads. It's not inherently a terrible idea, but it can seem like a good idea and then quickly turn out to be a bad idea. 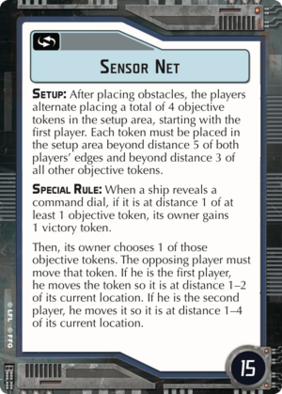 Sensor Net
Notes/clarification:
What kind of fleets should consider using Sensor Net?
First let's make it clear that if you play your cards right, you can get a ton of points playing Sensor Net because the tokens just keep teleporting around. The problem is so can your opponent, so you need a fleet that maximizes your own potential here.

Fleets with more numerous ships are better at Sensor Net, as they offer more opportunities for token-pickup and cover more table space so it's harder for your opponent to sneak a token away for good at distance 2. It should go without saying, but Strategic squadrons are extremely helpful in Sensor Net, both for foiling opponent plans to grab tokens for themselves but also to facilitate your own ships continuing to grab those tokens over and over again. I'd go so far as to say Sensor Net is an objective that you should only ever consider if you're using Strategic squadrons, plural (as in 2+).

It seems that front-arc ships and short-ranged ships have a slight advantage at Sensor Net as well. This is because it's not uncommon for bounced objective tokens to move closer to the enemy fleet. That's also where your front-arc ships generally want to be going, so it can set up situations where you can potentially snag (or threaten to snag, anyways) tokens that your opponent wanted to claim for himself when your ship and an enemy ship are both at distance 1 of a token.

What kind of enemy fleets are disadvantaged by playing Sensor Net?
You do not want to be playing Sensor Net when you've got a lower-ship-count fleet without any Strategic squadrons against a fleet designed to get good use from Sensor Net. Fleets designed to milk Strategic objectives can easily get a 100+ point lead on you. If you must play against Sensor Net without Strategic squadrons, please put your starting objectives in a corner and force the other player to get by with only the 2 tokens he starts with. 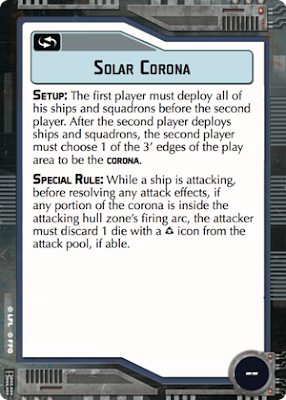 Solar Corona
Notes/clarification:
What kind of fleets should consider using Solar Corona?
Solar Corona is a great choice if your fleet can't realistically get points scored from other blue objectives and you'd like the deployment buff from Superior Positions but lack the ability to grab points from shooting things in the rear arc. In that circumstance, Solar Corona gets you the "meat" of Superior Positions with an extra added debuff that will primarily affect your opponent and all you needed to do was give up the points-scoring element you weren't going to use anyways!

Solar Corona has additional synergy with ships with a single higher-priority defense token. Many ships meet this criterion, but in particular I enjoy it with ships that are often being attacked at longer ranges or from worse arcs, like CR90s, Raiders, Gladiators, and flotillas - this allows them to usually keep their precious single token free against all but large dice pools if the Corona is getting in the way, but it won't work against dice modification, so be careful!

What kind of enemy fleets are disadvantaged by playing Solar Corona?
Anything that doesn't like the "deploying blind" disadvantage of Superior Positions will hate Solar Corona for the same reason. Gunline fleets often don't have the maneuverability to get around the Corona's debuff as they'll be doing their best to line up and shoot towards the approaching enemy fleet and right into the Corona. This is particularly true for Gunnery Team-equipped ships as they'll be doing their best to get multiple targets in arc and thus extra-hosed by the Corona. I've mentioned it above, but to reiterate: fleets without dice modification and/or rerolls are also going to have a hard time reliably generating accuracy results against Solar Corona. That's not an insurmountable problem but it can be tough.