I've pulled the separate Rebel squad groups out here into their own post, ready for adding to your lists as needed! 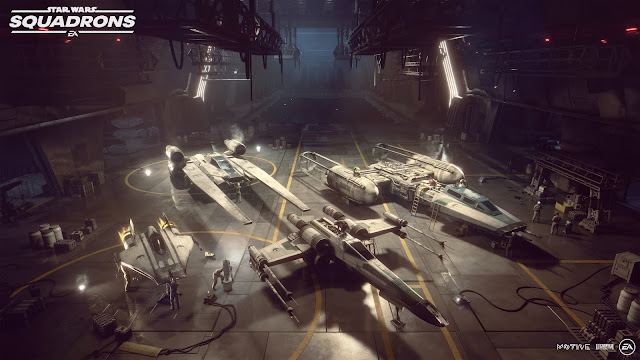 Soon, U-wing.  Soon.....
With the 1.5 update, our squadron groups max out at 4 tokened aces, which means each one you bring is going to need to do something important for you and the groups you field.  We'll start out with the SFC group.
Small Fighter Coverage (30-70 points)
Group 1: The Biggs Ball
Jan Ors, Biggs Darklighter, 2 X-wings (64 points)
The initial 4 X-wings you get in the Core Set are FINE, but this is a significant step-up for them.  Adding in Jan Ors (Rogues and Villains) and Biggs (Corellian Conflict! Spend even more money!) takes your fighter group to be EXTRA survivable and tanky, especially against some of the stronger Imperial attacks.  If you can't afford Corellian Conflict, I understand running just 3 regular X-wings with her.  But given the option, Biggs keeps them alive and locking down another fighter group.  This group has often been the basis of many fighter groups I've used, as it is the rock upon which multiple Imperial alphas break.  Sloane balls enter and can't kill their way through this tarpit.  It's a SOLID basis for many groups going forward.
Group 2: Scratch Group
Tycho, Shara, Lando, 1 A-wing (67 points)
For several points more than 4 regular A-wings, you get GREAT defense/occupying power.  Because both Tycho and Shara have Scatter defense tokens, that's an entire attack they can each take and effectively ignore (assuming no accuracies get rolled).  With Shara's ability to count crits as hits during counter attacks, TIE fighters have to actually sit and consider if they want to attack her, with the fact that 6/8 sides can do a damage that COULD kill the TIE.  It locks down enemy squadron blobs super well, and Tycho's ability to keep traveling away and engaging new enemies is an even bigger pain in the butt, as it prevents those new bombers from leaving/firing on ships.  Lando is a new inclusion, but he's an assassin to whatever squadron you need picked off.  He's not strictly necessary (and if you need points, he can just turn into another A-wing), but he is GREAT against opposing squadrons and is SOLID against ships after that job is done, so I wanted to include him here.  You can also skimp out and drop down to just straight Shara/Tycho for half the points.  Realistically, the pair of them will buy you 1 turn, maybe 2 of stopping your opponent's squadrons from attacking you before they die.  Find a way to ensure that you end your opponent's carriers BEFORE the next 2-3 turns become a problem for you.
Group 3: Rogue Group
4 YT-2400s (64 points)
This is the OTHER old Rebel stand-by.  It's not often seen these days, but it still does good work.  It's got 4 squads, all with 6 health, all with speed 4 and Rogue, all rolling 4 blue dice.  With Rogue, it won't necessarily be starting fights, but it finishes them against enemy squadrons quite well with very little investment on your part. Well, points investment.  I realize buying 4 packs of R+V isn't easily done, but at the end of the day it will FINISH a lot of squadron groups with very little work on your part.  You can change one of these to Lando, to Dash, to Mart, however many points you want to spend on the group.

The Rogue Group functions as the RESPONSE to whatever you get shot with.  Your ships likely may get hit with an alpha, but you can then send in the Rogues afterwards to engage and shoot theirs.  Or, you can use your ships to push the Rogues for one turn and get their own alpha.  The issue, of course, being that the more you're pushing Rogues with squadron commands, the more you're not actually USING Rogue for what you paid for it.  But, their dead squadrons may be worth it.

None of these groups are the Be-All, End-Alls of SFC, and if you like one or two of these groups or squadrons more than another, go for it.  It's going to take experimentation and practice of your own, but you'll get it with practice.
Medium Fighter Coverage (75-100 points)
We move on the MFC group.  What are we looking for in a squadron for the MFC? We want things that can be self sufficient as needed; many of the better MFC groups dont necessarily need a carrier or three to push them so Rogues increase in value.  High hull is good, but barring that some good defense tokens (Scatter!) can make up for that.  You want squadrons that excel in both anti-squad and anti-ship, which traditionally means either Bombers or black anti-ship damage (TIE Advanced and A-wings, for example).  Z95s are right out, as are basic TIEs en masse.  For Rebels, YT2400s are GREAT for this.  4 blue anti-squad, black anti-ship, speed 4, it's a fun little Frisbee.  Not every ship needs every one of these characteristics, but you'll want more to have them than don't.  Otherwise you're making an expensive SFC group.  To quote Supreme Court Justice Potter Stewart, "I shall not today attempt further to define the kinds of material I understand to be embraced within that shorthand description, and perhaps I could never succeed in intelligibly doing so. But I know it when I see it."
A few potential groups, and then we'll talk about other squadrons you can use.
Group 4: Duck Tales
Shara, Tycho, Dash, Ketsu, 2 VCX (109 points)

Why yes, this IS the squad ball duck_bird ran and got 10th at Worlds 2019 with her list. The benefit to slipping in 2 VCXs is that it's a LOT easier to include some of the Strategic objectives in, and it's ALSO easy (especially with this group) to steal someone else's Strategic from them. Ketsu landing near an opponent's squadron not only forces them to get Jan to free her, but it also can't move more than 1 when it tries to leave.  So sad for them!  As I had said above, not everything needs to be great at everything (VCXs are "meh" at anti-ship without Toryn), but their inclusion is in here for both anti-squad damage and Strategic shenanigans, so it's a good inclusion.  The inclusion of VCXs is a good reason to have a Medium Fighter Coverage group, as they're contributing to your victory plans whether they're killing your opponent's squadrons or moving tokens around and earning you points.

This is a slightly different mix of the 2 squadon types, Rogues and regulars.  The X-wings and Jan (slash the 4 A-wings) act as the first wave in, able to provide the first few damage into your opponent's squadrons, while the YT-2400s hop around in the squadron phase, attacking either wounded squadrons to finish them off or engaging and wounding NEW, unhurt squadrons for the X-wing group to attack next turn.  This is, however a more dedicated group, and you need to have an answer as to why you're NOT using a full 134 points of squadrons here (that reason may be that you're just buying time here and your ships are going for theirs, but know what you're doing going in) or VCXs for strategic options.  Theoretically you can use 6 YT-2400s in a group as well here, but my question for THAT is why you're not just adding another 2 of them, as good as they are?  That's a full LFC group, and that's another section.
Group 6: Danger Zone
Tycho, Shara, 4 A-wings (77 points)
This is a bare bones MFC.  It is likely going to die if you don't command it, but it has the speed to do an alpha strike upon your opponent if you can send in enough A-wings to clog up their plan to leave.  You may wish to send in Shara/Tycho as part of the initial alpha or as the second strike from a different ship (assuming you're not commanding 6 A-wings at once), but that may depend entirely on what your opponent throws at you.  The alpha strike you'll want to command all 6 of them, and most likely the turn after ~2 of them may die, hopefully countering for lots of damage as they do.

(Yes, I stole the same kind of joke from my MFC article, and I found the ugliest picture of Screed I could, with his trucker hat. Deal.)  This SHOULD be a decent start to building your LFC lists, but the most important point to playing with squadrons is PRACTICE.  It takes time to get good with them, but when you do, the results speak for themselves in the number of dead Star Destroyers you create.  Using squadrons and using black dice ships are two of the trickiest things to "get" in Armada, but with time, you'll get there.

The other thing I'll say is that while I have examples above that have worked in the past, and Eric has some good examples as well, I really CAN'T give you new and current squadron plans that work really well for always, etc etc.  This isn't me trying to duck the issue and not have to update these sections, more that squadron plans are always changing and Eric's point above about needing to practice and see what works in your meta are important.  Combine THAT with the fact that Rebel squadrons have multiple varied roles.  Luke is an incredible Bomber, but he's also an X-wing that rolls 4 blue dice at squadrons, so what role you need him for this turn is going to define what he rolls, a yuk yuk yuk.  Practice, talk to your opponent after the game, see what's working and what isn't for you and what you need and don't with regards to squadrons that lean heavier towards Fighters and those towards Bombers.  More simply put, how MANY X-wings/YT-1300s and how MANY Y-wings/B-wings do you need? But it's really more than that, of course.  It always is.

You can also go into hybrid versions of the groups with some Rogues and some not-Rogues, and that's fine, too.  It's actually a pretty solid plan, if you can make sure to command your non-Rogue ones.  For further discussion about commanding your squadrons and how you plan on doing that, I'll refer you to Eric's fleetbuilding article for Heavy Squadron use.