To bring the original two factions into line with how we'll be managing articles for the two new kids, it's time for me to give the Imperial-specific upgrades their own section. I'll be ignoring upgrades for Imperial ships that go in a unique slot, like the Interdictor experimental retrofits or the Onager superweapons, given those get covered in their respective articles. That leaves us with the non-officer more conventional upgrade slots here. Let's get to it!


Darth Vader seems to keep popping up in new places in the game, and in this case that place is aboard the enemy ship, discarding one of their upgrades that isn't a commander. Fierce! The only rule reminder is that Vader can only be used once in a fleet in any capacity, so no using him when he's already your commander or on a TIE Advanced, for example.

Every fleet has at least one upgrade it would really rather not lose, whether it's a clutch force multiplier upgrade like Home One, Yavaris, or a fleet command or simply "this helps me stay alive" upgrade like Electronic Countermeasures, Lando or the Adomonition title. Vader's here to hunt upgrades, which tends to draw a lot of attention. Any close-ranged ship that doesn't mind giving up the two upgrade slots is happy to have Vader on board although that usually means giving up on Ordnance Experts which can be a bit of a tough call. Typically you'll see him on Raider-Is, Kuat ISDs and the occasional Harrow VSD-I.

For extra fun times, see if you can get Vader to trash some Rapid Launch Bays or the Profundity title before the equipped ship can put the models inside on the table 😈.
Gunnery Chief Varnillian, also known as Gunny V, also known as Leslie Knope of the Department of Parks and Wrecks Your Station.


Leslie is the first unique Imperial weapons team, following a ways behind Caitken & Shollan for Rebels. Her main competition is the ever-present Gunnery Team and Ordnance Experts. Given she's competing for that highly-contested weapon team slot, you're looking for a ship that wants some extra dice fixing/dice banking that doesn't want one of the big two instead. There aren't a lot of Imperial ships in that situation barring the Onager (that she comes packaged with, unsurprisingly). Beyond that, she has some janky potential when used in a fleet with Vader or Screed on a crit-dependent ship: the commander handles some of the dice-fixing you otherwise wanted your weapon team for, and Leslie can hold onto a spare crit die to ensure you can convert surplus crits on one attack into a guaranteed crit on future attack with less dice (like a Raider side arc, for example) or from long range (like adding a black crit to a Gladiator front arc attack outside of close range). She can also hold on to accuracy icon to add to a future attack, like stashing up an otherwise-wasted accuracy at long range from a Gladiator-I so you can add it to an all-black side arc attack later, where normally it's impossible to roll an accuracy with all black dice.

Deciding when to use Leslie's dice-banking ability to make a current attack a bit worse in order to make a future attack better takes some practice and a keen eye for your opponent's defense tokens. If you're throwing in a good amount of damage and your opponent is going to brace anyways, reducing an attack from an even amount of damage to an odd amount of damage results in the same damage post-brace, so that's a good opportunity (example: if you're attacking for 6, swapping in her bad blank red die for a crit icon die results in the brace still reducing the damage to 3). Similarly, if you're attacking at long range and your opponent is going to evade your double anyways, might as well swap it out for a single hit and save it up for later. Just consider all your opponent's defensive options to keep your opportunities open without seriously hampering your current attack. 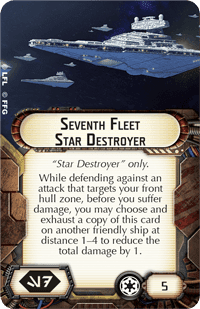 Right off the bat, you're going to notice pretty quickly that your star destroyer options are fairly limited: you get all of Gladiator-, Victory-, Imperial- and half of the Onager-class Star Destroyers. None of those are exactly the cheapest ships, although the Gladiator and VSD-I can be fielded fairly affordably if you go light on the upgrades, which helps make up for how expensive an ISD can be. That said, every single one of those ships has some great title options and if you're going to make 7th Fleet work, you need to choose to take 7th Fleet instead of those titles. That's a hard sell, especially when you need to leave behind ship-defining titles like Demolisher or Harrow or excellent utility titles like Chimaera or Sovereign.

Furthermore, you'll need to have enough 7th Fleet available for it to make a difference. Similar to how Hammerheads running their teamwork titles will usually want 3+ Hammerheads around with those titles so there's always a buddy nearby and it's harder to quickly knock them down to only 1 title-holder, rendering the card useless, you'll want 3+ Star Destroyers. That's a bit of a tall order in a 400 point game, imposing some severe restrictions on your fleet build and giving up some great title options for the "good but not amazing" benefits of 7th Fleet. In short: I strongly discourage you from trying to make 7th Fleet a thing in a 400 point fleet. It just isn't worth the hassle. That said, it's a lot of fun in big epic for funsies games when you just want to get a bunch of angry triangles on the table.

Assuming you're using 7th Fleet for fun in a large game, there's only a few other pieces of advice I have for you: