A Wings: Jumping Off the Deck, Shove it into Overdrive

So you've been reading Rebel Squadron articles, wondering how you're supposed to beat Imperial TIEs with their speed 4 and their blue dice and everything? Just like a mediocre NFL Quarterback*, throw it deep with the A-Wing!

The A wing is the fastest Rebel Squadron, and they're one of the potentially deadliest.  With 3 Blue dice base, and with Counter 2, they have the potential of putting 5 damage into a squadron in one turn, if that squadron attacks them.  Obviously, defense tokens and actual blue dice rolling need to be taken into account, but still: 5 potential damage.

A-Wings exist (currently) to be fighters and attack opposing squadrons first. Their black dice against ships, however, gets work done, as the first Worlds showed.  Assault Frigates and a slew of A-wings can deal a significant amount of damage to enemy ships, but right now, you can get a better effect out of a Y-wing with Bomber for 1 less point.  Plus, with Bomber, BCC lets you reroll that black dice.  So why do you want to use the A-wing then? Because speed 5 lets you get ANYWHERE.  Do you need a bomber cloud shut down? Throw A-wings at the edges.  Do you need to jump Luke before he can hit you with from Yavaris? A-wings from downtown a la NBA Jam.  Do you need to hit something from across the map? The further on the edge, the hotter the intensity**.

If you're bringing A-wings, you almost always want to bring some of the Aces. 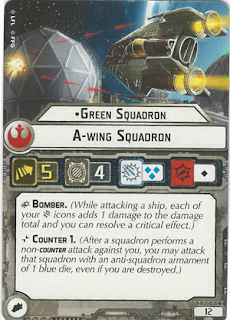 It exists I swear! And probably belongs in a RitR game!
Green Squadron gains Bomber at the cost of one Counter die.  It also gains the Unique Ability, which means for 1 more point, Rieekan loves it.  The bomber ability is nice, as BCC lets you reroll that black dice, but that's still a secondary ability IMO.  The fact of the matter is that it's still an A-wing.  You CAN jump Green Squadron forward to hit the front of a ship.  But that doesnt really help you when you get overwhelmed by the enemy TIEs or X-wings.  Bombers win by taking out ships.  Throwing one forward to inconvenience the enemy and make him spend one Defense token, while aggravating, doesn't do as much work as you would think.  It's a speed 5, 4-hull Y-wing.  But as a general A-wing replacement? Not really, the tokened aces are better.  Don't take 3 A wings and Green Squadron and expect it to be a better A wing.  Its an A wing that does better at attacking ships.  That's basically it.

Tycho Celchu (that's right, I read Rogue Squadron!) is an A-wing that can't be contained.  (Also, since he's not a bomber, his attack doesn't need the Contain, since he can't, ahhhhh, forget it).  His special ability is that he can keep moving around the enemy bubble, constantly engaging and forcing the Intel ship to keep moving and re-engaging/gumming up the works.  Tycho gets attacks against ships even if engaged, but his true power relies in moving and re-engaging enemy squadrons, preventing them from leaving or hitting your ships, especially if you can jump them after whatever Intel ship they have has left to go clear out other trouble.  Combine his ability with his scatter token (one of the few the Rebel Aces get) and he can get out of trouble relatively quickly, or get back in, as needed.

Then there's Shara Bey.  Miss Murderousness, Poe Dameron's Mom, the meanest A-wing ace.  Her crits count during Counter.  And she's Counter 3.  She will engage and kill what you need to kill, and she'll do it with gusto.  I have used her repeatedly, and she is my go-to starting A-wing ace.  She wants to engage as many squadrons as possible, as her damage spikes on the Counter attack, not on the original.  If you can engage and lock down 2-3 squadrons, she's killing them on the counter attack when they hit her.  Enemy TIEs DIE so fast when they swing at her.  The key to realize though, is that if your enemy engages Shara with an X-wing or YT-1300, then it's just going to sit there, engaging her and preventing her from being as deadly as she COULD be.  She wants a few friends around to keep the rest of the ball locked down so she can start countering when they attack her to leave.

How to Use Them
If your goal is to use A-wings on their own, they don't want to be just flung into the ball of squadrons/bombers that you're fighting.  They live on the edges, preventing the squadron ball from moving too far.  Ideally, you want 1-2 A-Wings engaging one side of the bubble, and 1-2 on the other side.  Force the Intel squadron to choose who gets to escape.  With their speed 5, the A-wings can jump to anywhere, just out of range of being shut down by 1 Intel squadron. (See here for thoughts on how to best use A-wings).  They can get the first attack on any squadron but Interceptors.  Knowing where range 4 will put regular TIEs means you can set yourself up next turn to fling your A-wings at them and get the jump.  You can hit the backside of an Intel blob, you can engage TIEs specifically so they cant get Swarm without moving a few of them.

A wings are the fastest thing the Alliance has, and they'll get to engaging you as fast as you need them to. Do you feel the need? THE NEED, FOR SPEED!***

*Rex Grossman comes to mind. Or Jay Cutler. Or Mitch Trubisky. Or.... never let your kids grow up to be Bears fans.