I feel I should pair the original squadron articles with a longer one or two for the GAR squadron groups.  Everything in this article is highly speculative until I see it in practice, but feel free to let me know what you find that does or doesn't work for YOU!

We'll start out as usual with the SFC.  If you want definitions of terms, I'll refer you to my original article about such (and the entire Squadrons Encyclopedia).

Group 1A: Axe and 3 V19s [2 and Kickback] (53/[57] pts)
Group 1B: Plo or Luminara & 3 V19s (59/60)
These are your basic starter groups that don't do a lot more than take a decent amount of fire before dying.  They'll kill a few squads or so on the way out, but realistically they're a placeholder and I hope you can kill your opponent's carrier FAST.  GAR squads are expensive, and they only get more so as you add in Jedi aces.  Axe works well with other V19s and Deltas (and generic Y-wings as well, of course!), and Plo/Luminara work well with V19s.  If you have the 4 points, Kickback and Axe are better than Axe and 3 generics, but I understand not necessarily having those points.

Feel free to play around with these squads and your builds as you figure out what does or doesn't work for you.  I'm putting these in here to highlight the obvious synergies of Ahsoka and Kickback/Anakin, and group 2B is one of the strongest base groups for GAR.  Axe and Kickback keep the Deltas alive, so long as you can push them all and protect the Deltas after your initial alpha.  With Dodge, the Deltas can hopefully turn a 2 damage shot/counter into a 1 damage one, and then Axe spends a token to turn it into nothing.  Super nice when it works, at the very least dropping it to 1 helps a bunch.  This group exists to pick off at the edges, not to just toss into the middle and hope to tank through. Kickback exists as another source of protection and tank for your Deltas. Go read the SFC articles for more.

Is there a CHEAP squad group for GAR, a la Tycho/Shara, Cienna/Valen, or DIS-T81/Phlac-Arphocc? Eh, not that I can really see.  Axe and Kickback KINDA can but I'd really recommend squeezing in 2 more V19s or the 2 Deltas mentioned above.  They just do SO much more for you, especially as all those squadrons I mentioned have scatter tokens and speed for them; your fastest GAR squad is speed 4.

This is the "I want 6 squadrons for deployments" group, and as a Rebel player I get it.  Hear me out with the second group; if you have ONE ship (say, an Acclamator or something else?) you wish to protect and can give it the 5 points for Advanced Transponder Net, you can protect it pretty well while your (presumably) Chargers go running around and firing on your opponent with repeated red dice shots.  I wouldn't necessarily try this if you have a few ships you wish to protect, but one main ship with a bunch of helping friends works well with this group.  The 6 generic V19s aren't bad by themselves, but you're gonna need to DEFINITELY coordinate your attacks to ensure you're getting 72 points of worth out of them. You'll likely want to upgrade one to Axe, of course, but points don't come from nowhere. He's worth it, though. 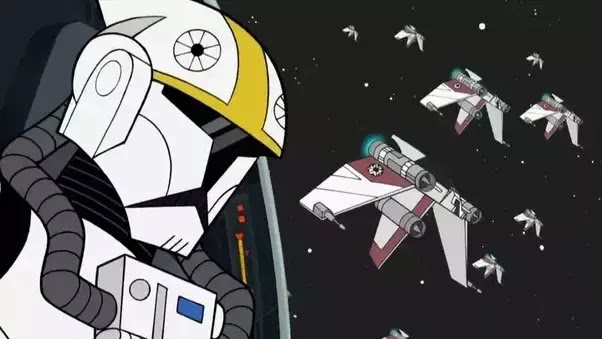 Continuing on to the MFC, this seems very much a "what if SFC but improved somewhat?" group, and I'll point out the nebulousness and "here be dragons" of this article on release. I'll update as I get more experience with them and these groups. As always, I'll point out the goal of the MFC is killing their squads first. THEN you get the ships. These groups remain pricey, because the GAR squads are very pricey to begin with and the Jedi don't help matters.  Anakin Y-wing is in a great spot in that he morphs well into both hitting ships and squads, so any group that doesn't have him in here can generally be improved by swapping one squad listed here for him.  Of course, Anakin Delta does great work as an anti-squad murderer.  Bring An.... akin, I suppose.

Group 2C: Luminara, Axe, 2 V19s, 2 Deltas (98)
Group 2D: Plo, Axe , 4 V19s (89)
Group 2E: Plo, Axe, Luminara, 3 V19s (100)
Group 2F (also group 3C?): Plo, 5 V19s (84)
You'll notice in group 2C that I added in 2 more Deltas (to group 2B) instead of V19s; that's because Luminara buffs them just as well as V19s.  I'd use this group as more of a leapfrog style, where the Deltas go in, the V19s clear them out, and then the Deltas move again.  I pulled out Plo as he doesn't improve the Deltas while Axe keeps everyone here alive as well.  Remember to keep Luminara safe, guys!  Group 2D is the other version of things, where you lean harder into the Plo part with the counter for everyone.  Axe is there to keep everyone alive as long as possible, including Plo if necessary.  The obvious improvements from group 2B to group 2E are hesitant, but that's also a 29 point jump.  Group 2F is just the bare bones version of the above when points get tight. Plo buffs everyone, they protect Plo.  End of the day, it's what you're getting out of this group.

Group 4A: Anakin Delta, Ahsoka, Axe, Kickback (80)
Group 4B: Anakin Delta, Ahsoka, Kit Fisto, Axe (90)
Let's call this the "Luminara" group, after the commander. 4 aces is the max you can include, and obviously we can't include her.  Kit Fisto isn't crazy necessary, but he's a 4 dice anti squad counter 2 with adept 2 and a ability to stick around.  Dude hits like a truck and is another Ahsoka node. You can potentially pair Ahsoka with Kickback or Axe with in group 4B, which is why they're both in the cheap version (4A). This group works with most other commanders, though I'd stay away from any of the squadron heavier ones (Wulf, Plo).  This group exists to take a while to die, (if Luminara help with SOME defense token refresh), and it exists to maaaaaaaaaybe hit ships if they're squadronless (totally happens all the time right?).  It's also only 2 deployments, so it won't win you the deployment battle. It's still good at what it does though.

Group 5A: Kit Fisto, 3 V19s, Anakin, Odd Ball (104)
This is a heavier squad ball masquerading as an MFC. Anakin and Odd Ball are heavy bombers that don't necessarily require Bomber Command Center, so that frees up some points for listbuilding.  The V19s and Kit work as a standard SFC, and Anakin/Odd Ball allow you to swap into hitting ships quickly enough after many of their squadrons are dead.  I do suggest finding a way to speed up Odd Ball in some fashion, even if that's Hyperspace Rings or FCT somewhere; speed 2 isn't great.  He can also be swapped to Ahsoka for no change in point costs.  Speaking OF Ahsoka...

Group 6A: Ahsoka, 2 Deltas, Axe, 2 V19s (98)
Group 6B: Ahsoka, Kickback, Kit Fisto, Anakin, 2 Y-wings (104)
This group continues our pricey issue here, but the fun thing about these groups is with 3 points spent on Hyperspace Rings on an Acclamator you can deploy Ahsoka and the Jedi forwards.  Turn 1 (if you have either Boosted Comms or Flight Commander) you can launch them into your opponent's squads, allowing you for 3+1 attacks (the +1 being the 2 dice attack from Ahsoka before her regular attack).  Not many people expect to be attacked turn 1, and IF you can follow it up somehow/keep yourself from dying you theoretically can bring in the V19s in to protect your Jedi afterwards.  Group 6B is the even more extreme version, where you send in Kit Fisto, Ahsoka, and Anakin, and then use the Y-wings left afterwards to bomb with.  Theoretically you can Intel away Ahsoka and Kit turn 2, and Anakin can spend a token to leave, but this involves a lot of luck and great tactics that somehow don't bite you in the butt.  You can replace the Y-wings in group 6B with V19s, but we're then at 109 points and reaching the upper limits of MFC.

I'm very hesitant to immediately include ARCs in this group, BUTTTTTT am willing to be proven wrong.  The inclusion of ARCs to me implies you want Nevoota Bee in as well in order to give it the swarm it badly wants for attacks, and if you give an Acclamator a Nevoota Bee, it's gonna want Expanded Hangars. And then, and then, and then...... Again, prove me wrong, guys.

And as always, our last group is the LFC, the heaviest of squadrons you can run.  I expect to see this a fair amount with the GAR, so let's define the groups as I see them.

Group 7A: 3-4 V19s (36-48) points, 1-2 Jedi (17-50 points), 3-4 ARCs (45 each)
This is the "ARC group" if you will.  If you're bringing ARCs, you're gonna need Hyperspace Rings or Fighter Coordination Team, and you're going to want to ensure that you can deploy "all" of them forward.  Anakin Y-wing is in a weird spot where he counts as a Jedi and an ARC in some weird hybrid? In that the ARCs are here as ship finishers for 2 blue bomber dice each and Anakin rolls 2 dice against ships.  If you have the ace spot and the points, bringing him or his Delta version is a good call.  Generally, I'd say use at least 1 Jedi in this group, and that could be a generic Delta as a Swarm node or one of the named aces.  If you're bringing ARCs though, make sure to bring a way to speed them up.  Otherwise, bring what you want to bring.  I'm hesitant to do 3 Jedi, as Luminara and 2 Deltas and 3 V19s leaves you with points for 2 ARCs only.  One of the few ways I'd do 3 Jedi is if one of them was Anakin Y-wing who can do double duty for a very good cost.  And he makes a very good case for inclusion into most LFC groups as is.

For all of these groups especially, you need either Ruthless Strategists or Flight Controllers to win the squad fight.  Relying on your native squad dice will NOT work and WILL take too long, let me tell you from experience.  Add in flak and Ordnance Pods and everything else you need as well to win ENOUGH of the squad game to win the real game.  See the LFC article for more on that.

As I discuss in the LFC article, these are the starting spots for where you want to go with these groups. The benefits the aces bring to each interaction are listed repeatedly above (and in each ace's individual breakdown), and my above groups and pairings show you who wants to work with who, depending on your call.  If you bring Ahsoka you'll want some other aces to fire with her, Kit's counter and ability to ignore a lot of damage helps you through the squad war, Plo just makes the squadron fight end faster, etc etc.  The nice thing about the GAR squads is that they all roll well against ships, which means they all can attack ships at some point, so use the ones you want to use and go nuts with them. 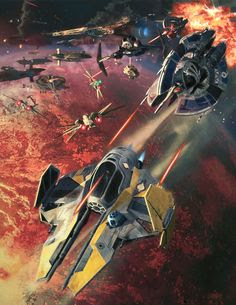 These groups are all "works in progress" so expect to see changes as I get more experience with these all.  And if YOU hit a group that you like, let me know in the comments!