Here's our second installment of Rebellion in the Rim objectives, the blue/navigation objectives. These are typically fairly wordy objectives, and in RitR if anything they've gotten even moreso, so buckle up and break out your teeny-tiny text glasses. 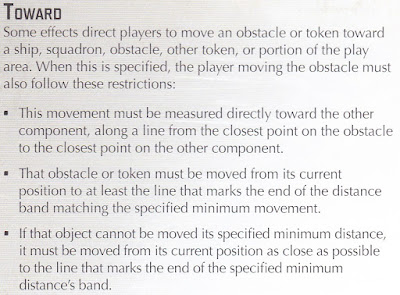 What kind of fleets should consider using Doomed Station?
Contested Outpost and Doomed Station as they're similar objectives and the same type of fleets like them for the most part. If you've got a decent amount of Command value that doesn't mind floating around in a pretty predictable place, you'll like both, and shenanigans that move obstacles around (like Grav Shift Reroute or Ezra) can help pull the station a little closer to your side, making it harder for your opponent to contest early on.

That said, note there are some definite differences. Doomed Station requires a little bit of a different mindset to score from, but you can float your ships in the same(ish) direction the station will go as it heads to the rift and keep scoring rather than overshooting it eventually like you do in Contested Outpost. Of course the downside there is the station is headed into a gravity rift so at some point you probably want to say your goodbyes if it gets too close to death before the rift causes problems for your ships. There's also the issue of it can be difficult to estimate exactly where the station will be unless second player is a good steward and always chooses to move it first (which generally he probably should) while Contested Outpost just sits there minding its own business.

What kind of enemy fleets are disadvantaged by playing Doomed Station?
The standard answer of "slow fleets that don't want to bring it to the enemy hate this." This is particularly tough on slower fleets because it takes them a while to get to the station in the first place and if they actually do finally get there, player 2 can do their best to start flushing the station into the grav rift to stop them from getting (m)any points. If you're player 1, it may be superior to head towards the rift (but not into it, of course) at maximum speed to use the rift's slow-down effect to assist you in turning towards the oncoming station rather than chasing the second player's fleet directly, where it's prone to slipping away from you.


Hyperspace Migration
Notes/clarification
What kind of fleets should consider using Hyperspace Migration?
Because the whale-watcher ships ideally want to be able to follow the purrgils' horizontal movement without too much trouble, Hyperspace Migration seems best utilized by broadside ships that can follow the purrgils' path while keeping their best guns pointed at the enemy or carriers with Boosted Comms that don't mind hiding behind whales while sending their squads out. Because the ships need to survive a round to upload their whale-tourism photos for points (space wi-fi is apparently pretty bad), it helps in the long run if they're a bit more durable, so heavier ships tend to prefer this a bit more.

Even though the errata slowed down the points you can get from Hyperspace Migration, it still requires an opponent to disrupt the whale-watching as quickly as possible. For example, a pair of Assault Frigates on the opponent-facing side of a purrgil and a pair of GR-75s on the "friendly" side of a purrgil will be racking up 80 points every other round while being not terribly inconvenienced following its horizontal movement path. Left alone a whole game, that's 240 points.

The big warning I have about using this objective is if the enemy fleet can bring enough guns to bear on your whale watching party quickly enough, especially with 1-2 large ships with Gunnery Teams (the scariest example being an SSD crashing the party), they'll find a target rich environment. You need to be ready to make a break for it if you're up against a fleet that can do this to you and accept whatever points you were able to get, rather than hanging out with the whales for too long and getting destroyed.

What kind of enemy fleets are disadvantaged by playing Hyperspace Migration?
Anything that doesn't have a great plan for dealing with broadside fleets and/or can't chase the opponent's fleet away from the purrgil is going to get scored on like crazy against this objective and should avoid it. It's worth noting that if an opponent plays Hyperspace Migration more conservatively by keeping his scoring ships on the "friendly side" of the purrgil, your fast ships trying to bring the fight to him have to deal with obstruction caused by the purrgil and the possible complications of ramming into them at high speed. In that kind of circumstance, your typical "get ahead of the conga line and clog it up" advice applies, but you're on a bit of a timer given the longer it takes to cross the T the more points your opponent is milking from whale-tourism. The good news is deployment for this objective is typically fairly telegraphed and your opponent will be deploying in a corner to start close to the whale entrance point, so try to keep your first deployment flexible and then deploy to counter whichever corner your opponent chooses to camp in.


Infested Fields
Notes/clarification
What kind of fleets should consider using Infested Fields?
I'd generally recommend Infested Fields to fleets using squadrons of their own, as it makes picking up the objective tokens pretty painless. Given player 2 is likely to have the 3 obstacles of their own nearby on round one, that's an early-game 45 points. Player 1 can deploy their two obstacles close to themselves and grab their tokens as well if they wish, but it's only 30 points and comes with the complication of needing to either overlap the obstacles (and also maybe exogorths) with their ships or subjecting their pickup squads to hungry space slug chomps. With no space station in the game, chomped squads aren't getting any hull back.

Once the tokens are picked up, player 2 just keeps the slugs away from their squads and tries to complicate things for player 1 by moving obstacles (and exogorths) into inconvenient places. If player 1 has squads of their own, exogorths can be a good way of blocking an alpha strike by hiding friendly squads beyond distance 1 of the exogorth and behind its obstacle with the exogorth facing the opponent's fleet - incoming enemy squads are likely going to have to deal with obstruction and/or angry slug chomps if they want the alpha. Come the squadron phase, the slug can disappear, the obstacle can move, and the friendly squadrons can bump up into cover behind the obstacle and/or exogorth to get the jump on the enemy next round.

So all that said, I feel like Infested Fields is worth considering in small to medium squadron coverage fleets. You'll have enough squadrons to grab the tokens painlessly and you'll want the extra help from the exogorths in case you hit heavier squadron opposition. No-squads doesn't want Infested Fields because they don't want their own ships to have to land on obstacles to pick up tokens and large squads doesn't want it because the exogorths may end up getting in their own way a bit and the overall benefit just isn't as good as Superior Positions.

What kind of enemy fleets are disadvantaged by playing Infested Fields?
As mentioned earlier, Infested Fields is rough on ships that need to pick up the objective tokens, so no-squadron fleets should probably avoid it. The penalty isn't severe (at best it scores 75 extra points for player 2) but it's not great overall. If you're leaning on your own squads as an important component of getting damage into enemy ships, those pop-up exogorths could cause you an awful lot of trouble, especially if your opponent has a way of making your squads wait around until the Squadron Phase to attack (by messing with your carrier[s] with Slicer Tools, for example) and get not only bit but activated by an exogorth for no benefit to you.


Volatile Deposits
Notes/clarification
What kind of fleets should consider using Volatile Deposits?
I consider Volatile Deposits a good objective for a Big Heavy long-ranged fleet: if and when you take a special crit from the objective, you can handle the extra damage and your ability to throw a considerable number of dice downrange makes it uncomfortable for player 1 to camp their asteroid field for fear of taking extra pain from the special crits. Plus you don't mind sticking it out at speed 1 for a while camping your asteroids. You do need to be careful about the dust fields, though, as they can complicate your plan to soften up your opponent and chase them away from their asteroid field. If you've got some obstacle-moving shenanigans (again with the Grav Shift Reroute or Ezra), that can help you to manage dust field problems and/or move asteroid fields to more convenient places. If you were bringing Damage Control Officer anyways, then all the better if you bring Volatile Deposits as well to shut down incidences of the special objective crit.

Ideally, you're looking to score 2-3 of the asteroid fields per round while your opponent gets none. If this can be done, you're on your way to gaining a very large points lead on your opponent.

What kind of enemy fleets are disadvantaged by playing Volatile Deposits?
You either need to bring it to your opponent quickly to disrupt their scoring with Volatile Deposits (and flip that special crit against them too) or you need to be able to handle the dice-exchange earlier on with a fleet presumably geared to chuck dice downrange with a vengeance and scare you away from your asteroids (and resolve that special crit against you too). If you're running squadrons, be very careful about getting them close to an obstacle that could be used as an explosion point - dealing 2 damage (or more, in some cases) to all squadrons around an obstacle can be a substantial amount of total damage.

If you're confident about being aggressive, player 1 may choose to place a dust field first to screen their approach to player 2's original asteroid field deployment instead of choosing their own asteroid field for their first obstacle deployment. Player 2 will likely choose another asteroid field, followed by player 1 choosing the other dust field, followed by player 2 choosing the final asteroid field. This gives control over the scoring zones entirely to player 2 but gives control over the dust field screens entirely to player 1. If you think you can win the fight once you get to the asteroid fields, accepting that player 2 will earn 45 points for the first two rounds (likely) may be worth it if you can use the dust fields well to avoid too much incoming fire and then chase them away from the concentrated scoring zone(s) they set up.
Posted by Eric Taylor at 1/01/2021