Rebellion in the Rim PENULTIMA: The Undiscovered Country

This was supposed to be Biggs's article, but he's busy with life and schooling, so I voluntold him I would do it.

Hit the jump and let's get pivotal! (pivotal, pivotal in a Cyndi Lauper voice)

So it's been leading up to these.  After each act, you get to fight one of these bad boys.  You and your teammate(s) meet up and get to spend 5-6+ hours fighting it out!

We refer you again to Biggs's rules for the Grand Moff variant, which is still a work in progress and we're improving and playtesting.  It's also linked in the sidebar under RitR, and I'm not sure I have a 6 hour game in me again.  Anyways!

You and your fleet show up with your buddies' fleets and you all start fighting it out. Your upgrades and commander abilities only effect you and your fleet, and you're all fighting it out on a 3x6, either with just the regular 6 obstacles (4 total players) or the regular 6 and 2 dust fields (6 total players).  It's all been leading up to this, and it's where you can combine for some stupid fun.  There's 3 different objectives you can play for the pivotals (below), and after each pivotal you only resolve the following steps:

All of those 5 steps link to the previous article about those all, so check that out if you forget what each of those steps means.  Let's also point out the missing steps.  Namely, you don't get more strategic effect tokens unless it's part of the battle effects.  Nor can you technically spend commander experience (even though you can earn it in the pivotal, amusingly enough).

The assaulting team has initiative (goes first) for the pivotal.  The team that's down on points (or the Rebels in case of a tie) chooses the pivotal and follows the setup rules for choosing who is the assaulting player.

Minor bits: it's a lot like playing a Sector Fleet game, only that a commander's "friendly" effect can only be resolved by the ships and squadrons of that player's fleet.  The other interesting thing is that in the climactic battle, you can upgrade some ships!

During the climactic, the ULTIMATE PIVOTAL, spending one repair yards token and TWO resource tokens lets a team choose to remove a number of ships/upgrades/squadrons worth one huge ship and its upgrades equipped.  You can also spend 1 and 1 for a large ship.  Think of these as "rewards" for your commander doing so well that he's been promoted to command something important for once.  Should you break the "no wave 8 rule" for these? Sounds like a great question for your playgroup!  When you swap a ship in, your team can spend one ally token to add 45 fleet points to that player's total, and they CAN go over 250 points here.  Basically, if you need to sell a few Interceptors and your Victory to get the ISD, you can use these points to retain a fighter coverage in some sort.  That WOULD count as your ally token for the match, but you can also equip any upgrades you didn't sell for the new ship.

The last minor bit is that whatever team won a Prototype Recovery mission can spend one repair yards and one resource token to upgrade one TYPE of non-irregular squadron in their fleet.  ALL the squadrons of that type gain a veteran token.  Does this mean veteran generics? SURE DOES! Use some of those cardboard pieces you have in all the different expansions to track them on the squadron base.

Winner of the battle gets the battle effects, and if it's the Climactic you see what the final score of your whole campaign is (page 25).  Then you congratulate your friends for a finished campaign and you go get a pizza or beer together.  Because the whole point, as we've stated several times here, is to have fun.  What 3 different Pivotal Objectives can you play?

Initiative belongs to whoever chose the objective, and it's treated like a base assault.  So your opponent has to have a base there.  If the assaulting team wins, they get to replace the base that is there with one of their own and the get 2 campaign points and the location's victory bonus value.  If the defender wins, they get one campaign point and either one skilled spacer or one repair yards token. 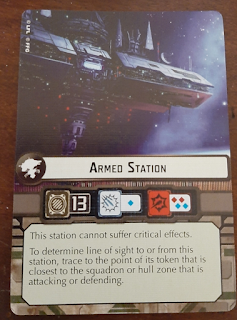 The station can't heal ANYONE, it's independent of such matters.  If a squadron blows up the station with an attack, the assaulting player gains a victory token worth 10 points at the end of the game.  If the assaulting team wins the battle, they can place friendly presence stickers on 2 planets in the area that are either unoccupied or have an enemy presence (including border locations!).  Then they gain two campaign points plus the victory bonus value of each location they placed a presence sticker on.  If the defender wins, they gain one campaign point and one diplomats token.  Each of the assaulting and defending team's players gets one reward from any friendly location in the chosen area.

This is a fancy 7 round game.  You can only choose this if the difference between both teams' campaign points is at least 3 if not more.  The team that chose this objective is the defending team, and they pick a location with a friendly base.  The assaulting team must be deployed so their rear hull zones are distance 3 from their edge (but they can deploy out of the deployment zone).  They're touching what would be the front of your normal deployment zone with the back of their ship (so long as a corner is touching, it's touching!).  The defending team deploys all the obstacles and no station UNLESS this location has the "Base Defense: Armed Station" objective.  They deploy in their normal zone.

The defending player may declare a hyperspace retreat during rounds 3-7.  If a ship retreats at distance 1-2 of the assaulting player's edge when it jumps out, the defending team gains victory tokens equal to that ship's command value, and that ship does not count as destroyed when determining score (it's jumped out).  The victory tokens are worth 10 points each, so your command-3 jumping out is worth 30 points for you.  The assaulting team gains victory tokens for the defending player's ships' command value for everything left in the zone after turn 7, and it's scored as normally.  This is kind of a "Hail Mary" option to attempt to get your team back in the game, since you need to be down 3 to choose it anyways.

Do that enough, and you've finished the campaign.  And we've nearly finished these articles! Coming up: what Biggs and I each learned from this whole thing!