Fresh off the presses of wave 8, it's General Mitt Romney Romodi.
Rules
Discussion
General Romodi ties Admiral Ozzel for cheapest Imperial commander, and that's a pretty good place to be. 20 points for a commander gives you a lot more room to fit in fancy toys but that means it's unfair to compare Romodi to more powerful expensive Imperial commanders like Darth Vader. It also means that it's okay to not trigger Romodi constantly: he's not priced like he should be working on every single attack.

All that said, Romodi lets you flip obstruction from a 1-die loss into a 1-die gain, giving you a net gain of 2 dice. That's pretty impressive and it can definitely add up when used intelligently. Building a fleet that lets you more reliably trigger Romodi is important, but it's also important to ensure it works fine on its own without the dumb tricks: you can't always ensure that a ship or obstacle gets in the way for you. Furthermore, I'm going to warn you against a common early response to Romodi, which is "oh sweet I'll just run my own Gozantis in front of my ships to get Romodi's benefit." This can be a useful trick in a pinch but it's extremely wasteful. Your Gozantis are a minimum of 23 points and if your plan is to put two Gozantis in front of two (mayyybe 3, somehow) combat ships for an extra red die, you're not only exposing those Gozantis to unnecessary fire but you're spending 46 or more points to get your 20 point commander working. Don't do that. 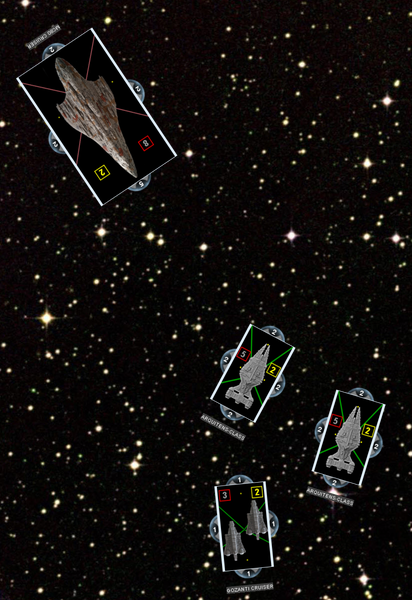 Here we have a pair of Arquitens and an Assault (red die) Gozanti against an LMC80. With Romodi, the Gozanti and rear Arquitens easily gain the extra die from the intervening closer Arquitens obstructing them, allowing them with concentrate fire to get up to 3 red dice (Gozanti) or 5 (Arquitens), plus possibly 1 more from the Arquitens' turbolaser upgrade.

Be careful with situations like this: it's easy to imagine examples where Romodi magically stops time and lets you set up a perfect several-activation combo with tons of extra red dice after your opponent blunders into range. These flights of fancy don't have a lot in common with an actual game of Armada, as it turns out every commander is great when your opponent does dumb things and gives you as many activations in a row as you want afterwards. That said, the basic setup can demonstrate how you can fly in such a way to give obstruction to a friendly ship, maybe two, while benefiting from that obstruction back.

You can also use your opponent's ships as assets, too: 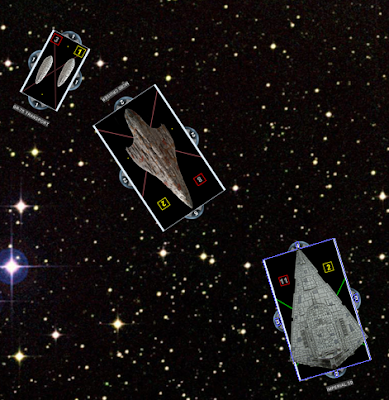 Here we see an ISD-II and the same LMC80 making a jousting run at one another, but the support GR-75 in the background is in trouble due to the ISD-II's Gunnery Team. Normally the GR-75 is not a great target in this type of situation because only 3 red dice isn't amazing and the ISD will generally prefer to spend its second attack better if there are other options. In this situation, the ISD-II would get 5 red dice due to obstruction, which gives it a reasonable shot (48.7%, better obviously with other dice adding or rerolling effects) at getting an accuracy to lock down the scatter and getting some damage to stick.

Finally, setting up obstacles well can pay off, and this is particularly true when you get additional control over where the obstacles go after initial deployment with Grav Shift Reroute. Objectives that provide extra obstacles beyond the usual (like Salvage Run, which jumbles them up in the middle) or allow you to move or create obstacles mid-game (like anything with exogorths) can be extremely helpful here, too. For example: 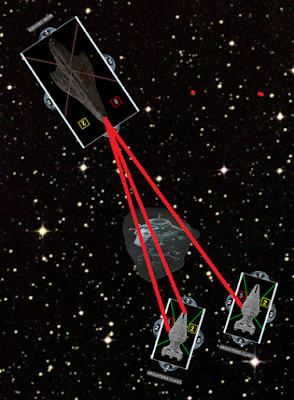 Here we have 3 possible Arquitens attacks on the poor dummy LMC80, all obstructed by the station (the front arc on the left Arquitens is barely able to attack the LMC80's front arc). If/when the LMC80 activates, it's suffering from obstruction when it shoots at the Arquitens, but the same isn't true the other way around. This is also another lesson in "double arcing is great, especially when you get extra dice on every attack."

Ships
As mentioned earlier, Romodi likes his long-ranged ships. They're easier to set up through various forms of obstruction and hence more likely to get a bonus from him. I'd specifically recommend:

Arquitens. In case it wasn't clear from all the examples, Arquitens are great with Romodi. I like to run them in pairs so one can give the other obstruction if no other sources are easily available. They've got good long-ranged attacks for their cost, add cheaper activations to the fleet, and being able to actively use obstruction to their benefit (for sniping support ships or hiding behind other ships or obstacles to stay safe) without suffering on the attack is great and unlocks some sneaky tricks.

Gozantis. For all the usual reasons but also because they're the cheapest way to get attacks on the table to benefit from Romodi's ability and the cheapest way to get ships on the table to use for desperation obstruction if you absolutely have to. Assault Gozantis are surprisingly decent with Romodi because they can reach out and touch someone at long range, and the extra dice add up surprisingly quickly.

Imperial-class Star Destroyers. Specifically the ISD-II and Cymoon options, as they have longer range. There's not much else to say here - ISDs are pretty user-friendly and flexible and anchor a fleet well, although they're expensive. They're not mandatory at all, but they're easy enough to squeeze in if you would like to do so.

Interdictors. Grav Shift Reroute can help set up obstacles well for obstruction and the double-arc-dependent Interdictor will happily take an extra red die on each attack to improve its generally-underwhelming damage output. It also gives your opponent an incentive to come towards scoring obstacles in objectives, which a Romodi fleet is obviously keen on. That said, this is more a recommendation for larger games; it's a bit tough to justify an Interdictor in regular-sized games with Romodi unless you've got some strong synergy planned beyond just obstacle manipulation.

Onagers. Unsurprisingly, Romodi enjoys using the ship he's packaged with. When attacking from extreme range, it's very easy to be obstructed from a ship or obstacle in some fashion and adding a red die can help improve your Ignition attacks and increase your chances of triggering your superweapon crit. Being able to hide behind an obstacle with Rakehell allows for some easy Romodi triggers and also makes attacking your Onager more difficult: you will be obstructed and there's a big hurdle in front of you for any speedy ships planning to bring the fight directly to you.

It's particularly enjoyable shooting through other long-ranged ships that are themselves obstructed by ships further in, presenting a lot of layers of defense and extra red dice coming at anyone foolish enough to run into no-man's land.

Disposable Capacitor exemplars like Raider-IIs and VSD-IIs can work all right with Romodi, but they won't consistently deliver big dice pools at long range after their Disposable Capacitors activation nor will Romodi's extra red die help them trigger any ion cannon crits they may be trying to deliver. There's some synergy there, but it's not as strong as the earlier ships I mentioned.

Fleet building
Romodi loves his red dice long-ranged ships but for the most part such ships that aren't ISD-IIs or VSD-IIs (thanks to Leading Shots) can run into some dice control problems. Red dice are infamous for being fickle creatures and whenever Romodi triggers he's bringing an extra one along to the party. This makes dice control even more appealing for Romodi than for most other commanders (excepting Ackbar for basically the same reason): you're more likely to have blank red dice showing up and it would be great to have something you could do about that.

To that end, upgrades that assist with some dice control are encouraged. Dice control turbolasers like Turbolaser Reroute Circuits or Linked Turbolaser Towers give you some additional control over a single die, but upgrades like Intensify Firepower go even further for your whole fleet. Officers like Krennic or Vader (...who kills your other officers, but I digress) that can offer up rerolls for multiple dice are very appealing as a means of smoothing out inconsistencies and saving your particularly bad rolls where a single-die reroll won't do much. That's not to say that you must have dice-fixing, only that without it you're just hoping the dice go your way and if they don't... well... too bad? It's not a great feeling.

Like all Imperial commanders that do nothing for squadrons, Romodi generally tops out at medium squadrons but can go as low as none, depending on your build.

I tend to prefer running Romodi with at least an emphasis on the MSU archetype, varying somewhere between "pure" MSU and an MSU/Big Heavy hybrid LMSU with a large flagship of some kind (your call on Onager vs. ISD). The more ships you have on the table, the more Romodi can trigger and the easier it is to obstruct yourself if you need to.
Posted by Eric Taylor at 1/02/2021