Rebellion in the Rim obstacles and proximity mine tokens

I briefly considered adding these to the original article on obstacles, but given they're not commonly used in most games (being tied specifically to Rebellion in the Rim objectives and the mines to RitR upgrade cards), it seemed wisest to give them their own separate article I could link to when I discuss the new RitR obstacles and mines in the future (we're getting there!). So let's talk new cardboard tokens that go on a giant mousepad.

Okay, so this is going to be a big picture-heavy as I've scanned in the tokens themselves and I'll be referencing the text blocks from RitR when it comes to the rules before I do the usual rules clarification bit, etc. Here we go! 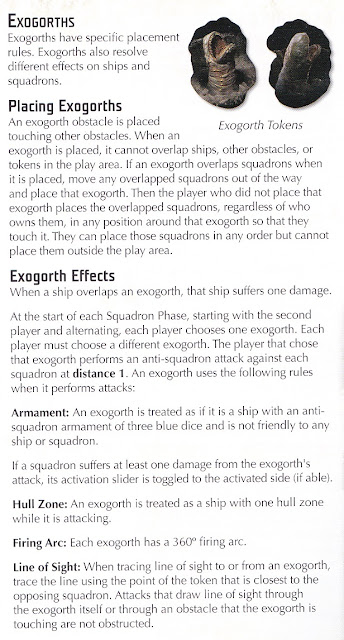 Extra rules stuff
The important thing to note is exogorths pop out of different obstacles in the objectives they are used in and don't need to stay put. The second player chooses where they come from in those objectives, so this can be used to inconvenience enemy squadron groups close to an obstacle by threatening them with sleepy slug chomps if they don't get activated by a squadron command earlier or to set up a bit of an anti-squads defensive perimeter near your models near obstacles. Turns out squads aren't super keen on jumping into areas where they'll likely eat 3 blue dice attacks for free. 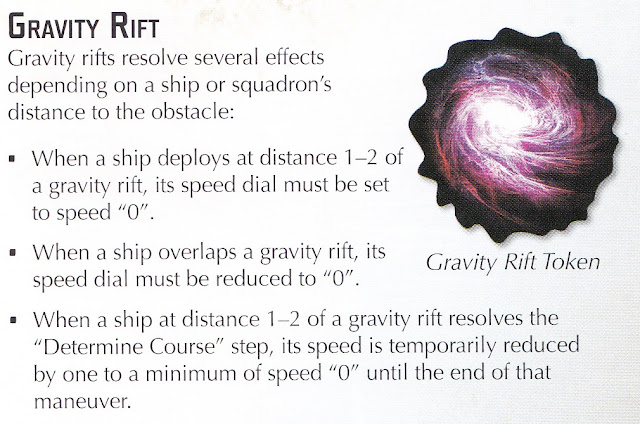 Extra rules stuff
At a casual glance, the gravity rift is an "oh God, avoid this thing" obstacle, but it's got some sneaky uses beyond that. Obviously you should be trying to avoid landing on it with ships at all costs (speed 0 ships typically are in a bad spot) but that doesn't mean you should avoid it altogether. For example, say you have a long-ranged ship like a Cymoon or a Home One MC80. You want your artillery ship to rain red dice death on your foes without getting closer to them but going speed 0 is not exactly a great move. As long as you're at distance 1-2 of a gravity rift, you can lob dice downfield all day long and then your speed 1 ship goes speed 0 without actually being speed 0. It's also got obvious uses against Raddus, similar to G7-X Grav Well Projectors. Don't be afraid of using it as a hand brake, either, if your fast ship needs a bit of help slowing down to keep from flying off the table or into an obvious trap. 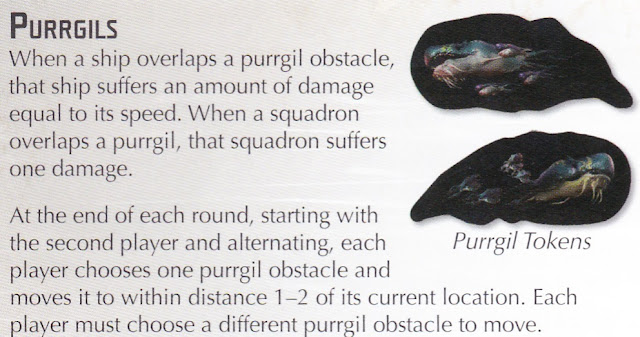 Extra rules stuff
There's not a lot to say about Purrgils that wasn't already covered above: they're mobile obstacles, which provides some opportunity to deny or create obstruction, and they hurt to land on. You can try to set them up to get in the way of enemy ships making a break for it at high speed or complicate the approach and when used well they can be even more damaging debris fields that also hurt squadrons. Typically Purrgil have a special role in their objectives that provides an incentive to avoid them or get close to them, but not always. 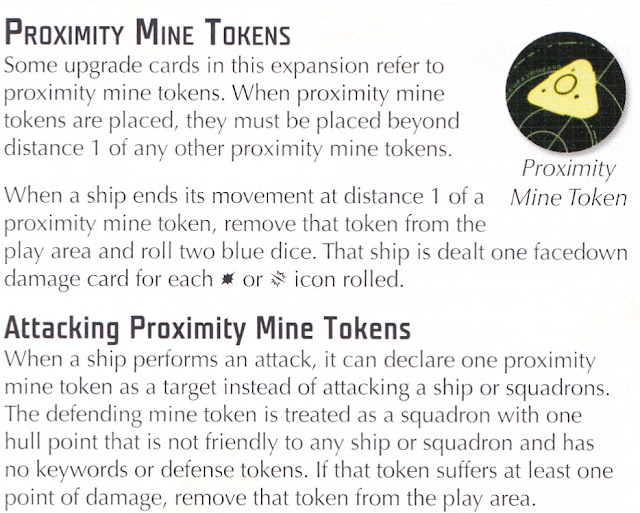 Extra rules stuff
Mines are one of those things that gets better the more of them you have: it's less impactful to flak down one when there are several more, you can cover more of the table with them, and you can put them close to one another to more strongly disincentivize going to certain places on the table. Just be careful not to accidentally hit your own mines. They're also great against expensive low-hull ships like MC30s where hitting the hull directly can cause serious problems, and at an average 1.5 damage each, they can add up quickly against smaller ships.
Posted by Eric Taylor at 8/07/2019

Email ThisBlogThis!Share to TwitterShare to FacebookShare to Pinterest
Labels: obstacles