This is something of a companion article to the attack sequence article I've linked to countless times already, but its focus is flipped: we're looking specifically at things that keep your ships and squadrons alive when you're attacked. For the sake of brevity I passed over the minutiae of the Spend Defense Tokens step in that article, but we're going in deep this time around.

Let's start with the basic defense tokens. I'll be quickly reprising what they do and adding some notes for interactions that aren't immediately obvious. As a reminder, you can do whatever order of operations you want in the Spend Defense Tokens step, so for effects that produce an uncertain result (like rerolling dice) it's usually better to do those first and then make further decisions from there. You can dig into these in more detail in the Rules Reference Guide section under Defense Tokens, but I'm proving the cliffs notes version.

Evade got a bit stronger but more complicated in 1.5 but the basics are still pretty simple. Relevant sections from the RRG:

Brace is a little weird in that it's spent during the Spend Defense Tokens step but it doesn't do anything until the Resolve Damage step, where it halves the amount of damage taken (rounding the damage total up).

Contain is oft-misunderstood by newer players in terms of exactly how it works: you spend the contain token during the usual Spend Defense Tokens step and it prevents the attacker from resolving the default standard critical effect. Effectively it removes that critical option from your opponent in the step immediately after.

Salvo is the new kid in town and a big part of why I'm writing this article. Salvo works somewhat similarly to the Counter keyword for squadrons, with a lot of provisions:
Notes

Other effects in the Spend Defense Tokens step

We've got a number of different types of defensive effects we get to talk about, so get comfy! 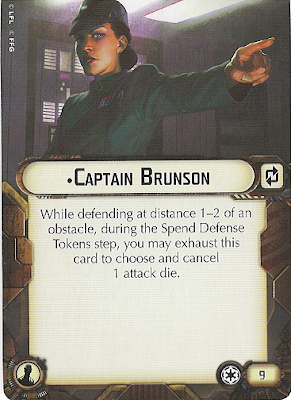 Dice removal is effectively the same as the effect of an evade at long range: pick a die (sometimes more?), tell it to get lost.

Try to keep an eye out for opportunities to remove critical icons from the pool if it can stop a fancy crit from triggering against you or to remove double-hits or hit+crit results to remove 2 damage. If you're going to brace the attack anyways, make sure the die removal makes a difference in the end damage total or does something else valuable. Generally you remove more total damage bracing and removing a die (or dice) from separate attacks if you expect to get attacked multiple times. 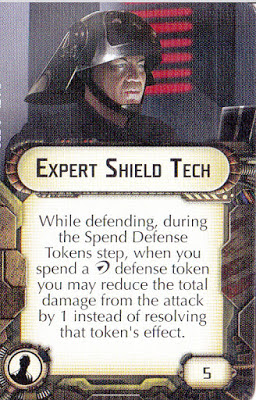 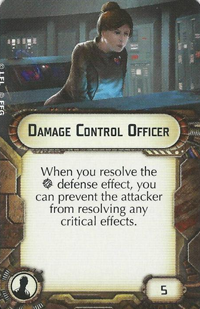 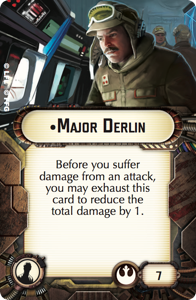 Damage reduction effects subtract damage prior to suffering damage from an attack. These happen after halving the damage from brace (because brace works when you're totaling up the damage and damage reduction effects kick in right before you suffer the damage, slightly later). It's generally best to use these types of effects as soon as possible, but can be worth saving them to help relieve pressure on your redirects if an opponent has an attack lined up on a shields-weak hull zone.

Damage-reduction effects combine better with brace tokens than dice-removal effects and can reduce damage pretty drastically. Bracing a 4 damage attack to 2 and then subtracting 1 more damage from that to bring it to 1 total makes a big difference. 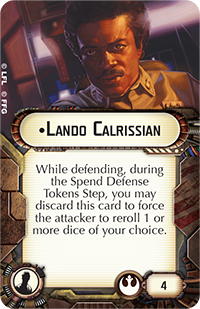 Dice reroll effects are pretty much the reroll function of evade tokens, only usually without the same restrictions and often capable of affecting more dice. As mentioned earlier, rerolling should typically be done before making other defensive decisions. It's important to keep in mind what the different colors of dice tend to produce for results before rerolling them. My general thoughts are:
Dice reroll effects enjoy being paired with dice removal effects so any troublesome results you have post-reroll can be removed. It also allows for a bit riskier rerolling with the knowledge that should you get too reckless and reroll a single damage into a double-damage result you can always remove that.

Modification-prevention effects bear mentioning because they mess with a few of the options we've already discussed (and can be annoying for an attacker too, but that's outside the scope of this article). To be clear, modifying a die is:
So if an opponent's Lando squadron is attacking our flotilla and uses his ability to set a red die to the double-hit side, we can't reroll it, cancel it, or change it to any other facing. That means if we scatter the attack, the blue die will be removed but the red die won't and the flotilla will take 2 damage. Annoying.

On a side note, it also means if Lando uses that ability to set a die to an accuracy facing, he can't spend it to lock down a defense token. Too clever by half, Lando.
Posted by Eric Taylor at 1/03/2021

Email ThisBlogThis!Share to TwitterShare to FacebookShare to Pinterest
Labels: rules