I've been playing on Vassal a fair amount more than Eric, so I stepped up to write this one. The recent Italian TTS tournament had a swath of Onagers, dual and triples in fleets everywhere. Let it be known that I'm giving you a look. It is not a happy one. Let's talk about fighting wave 8's flattest boogeyman, the Onager! 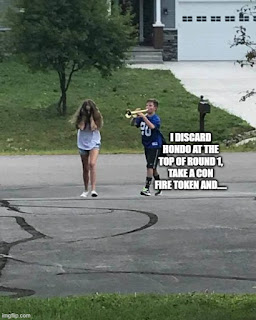 Take a look at the number of deployments your opponent has and how many you have.  If you're lucky and outdeploy him, you can save the ships you desperately don't want getting shot turn 1 until after he's deployed his Onager.  If you're unlucky, you can try to force a choice. You're going to have to play a few times against it to see what the range/turning radii of the Onager can be and if sideways dodging is actually doable for you, or if you're going to have to be going straight ahead at 'em full steam.  It doesn't feel good knowing and seeing that you're about to be shot, but that's why you line up repair dials earlier than you'd think (turn 2).  It's not a dial I see people commonly using, but it gets work done, especially when your large base has been hit once or twice already.  It also feels bad when the Intel Officer driving the ship targets your brace, but getting about 3 damage saved now is 3 damage that isn't enough to kill you next turn.  Drive right towards them, and be sure you're keeping them lined up to where you can hit that ship as soon as possible.  You're going to need to be going speed 3 (or 2 with Engine Techs), which is doable for most of the large bases in this game (though it does necessitate Engine Techs in your listbuilding). But if you're spending your time avoiding the Onager because you don't want to get shot, you're going to end up dead and unable to contribute with your large based ship.  That looks worse than a bloody and wounded ship coming in hot, I'll say that.
Speaking of coming in hot, it's important to end up in a spot where you're attacking it but the Onager can't jump to speed 3 because unless you're playing Opening Salvo, a half dead ship is worth the same as an undamaged one.  It's a little frightening getting into its face like that, but you can approach from the almost side WITH THE UNDERSTANDING that if it does accelerate you find a way to make it die tired.  See the above image for an example of a good approach, and I made sure not to be in its special arc with the MC30.  The obvious Lando quote of "Fly closer to those Star Destroyers" sure seems apt here.
The "good" approach still lets you attack with a side attack even if the Onager tries to run; you still get some solid damage into it, allowing for your followup shots to finish it off (because you obviously were smart and have ships waiting for its landing spot, right? Or have your CR90 coming around to finish it and keep plugging at it?).  The other benefit to the MC30 location there is that the Onager really can't turn to its left (picture right) or else he's just closer to the MC30 and CR90 there.  Turning to its right (picture left) was its only potential means of escape, and now it's taking an MC30 side arc in the back of its head. I'm sure we all feel bad for it.
The "bad" approach (below) is again one that's trying to avoid all damage on the way in and try to finish it off.  The Hammerhead in the full side arc is not actually stopping the Onager from running and a decent Onager player will have seen this and prepared, prepping to run as the Hammerhead had approached (or before it got to activate!) A slightly smarter plan would have been to have the Hammerhead ready to follow it and continue firing on it in the back and forcing it to be the first to activate every turn, preventing your opponent from setting up deadly shots that you were forced to come into.  You CAN approach the Onager entirely in the side, just make sure you're able to get that good damage.
There's a different discussion to be had about whether forcing the Onager to run or not instead of firing on you is worth something in the end, but for the purpose of this discussion, assume you're trying to kill the Onager instead of let it get away.  Given perfect information, here's how I might have adjusted the Hammerheads' (we're using plural now!) approach.

The one approaching from the side (like before!) can still follow up and keep firing at its back, while the one in the front (but not the special arc again!) is still in black range even after the move.  Both of these are helpful and doable, and if you could find a way to get both Hammerheads in there, that's an Onager in for one heck of a bad time. This is so sad. Alexa, play Despacito (timely jokes!)
The most important thing in my opinion for fighting against the Onager is getting in practice and seeing what it CAN do slash what it averages out to, damage wise, along with being willing to change your tactics to account for what it can do. Once you start experiencing it and what it will likely do to you, you're going to be getting good practice against it.  So get up there and take your lumps, and get into range and start blasting.