Eric and I are aware we have ship articles and commander articles to do, but until we have product in hand we're going to wait.  Easier to get good pictures that way of the upgrade cards instead of the "definitely not filmed in the theater" copy of the latest Avengers movie (we get the good scans for you guys!).  But I do want to get into 3 specific rules interactions that keep popping up on the Discords (speaking of, join us there!).  Eric is out with his wife and son today, so grab your water wings, John is wading into rules discussions!

These points will eventually make it into the eventual articles/blurbs for these upgrades and people, but for now they're here.  Before I begin trying to swing my "big TO fancy pants" nature around, I talked about these with several other TOs, several playtesters, and the 3 rules people I trust (Dras, Karneck, Ian).  I can't tell you how YOUR LOCAL TO is going to rule these, but A) this is how they should be ruled currently and B) this is how more often than not people will tell you they will rule them.  Again, your TO may do things differently, but until Armada gets a lead developer again, these are the best ways we have of ruling these cards and interactions. 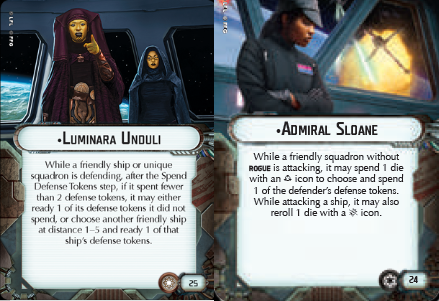 Sloane/her squadrons are technically the one spending your ship's defense tokens (notice the card's use of "it" there!), so since Luminara didn't spend that token, it can be readied by her ability (if it still exists, we'll get there!).  But if the token was exhausted already and Sloane's squadrons spend it, the token is gone and Luminara doesn't get it back.  Luminara says "ready" a token.  So if you are being hit by a generic TIE fighter and it rolls an accuracy against you, you can spend 0 tokens and ready that token after the TIE attacks. If a TIE Phantom hits you for 2 damage and an accuracy, exhausting your brace, you can spend a different token (you can't spend the same token twice (RRG p 5)! you can't spend things that have been targeted with the accuracy icon (RRG p 2)) if desired.  THEN, you can refresh the brace that was targeted by the Phantom, but not the other token you spent (Luminara specifies a token it did not spend).

What this means for you: Luminara is kind of a soft counter to Sloane.  Assuming you don't spend any tokens, any squadrons who come in first and try to soften you up end up having the defense tokens they exhausted end up unexhausted.  This works on both her ships and her squadrons (if I spend my OTHER brace, my first brace is a token I didn't spend so it can be readied).  For all of you Sloane diehards who feel this makes her unplayable, cry harder just send your squadrons in AFTER your ships to spend the tokens that are now red after she takes the brunt of your ship's attacks.  Luminara doesn't immediately negate Sloane, but she does offer ways around her standard form of play, so long as you spend the tokens in a specific way. 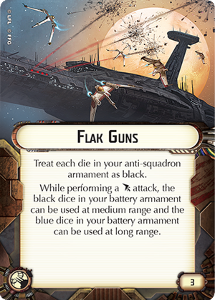 "Treat each die in your anti-squadron armament as black."

The issue with this card is that at the moment, all upgrade cards are optional unless specifically stated.  This means I don't NEED to change my flak dice to black unless I want them to be, right? Having talked to an ex-developer who asked when presented the question of its use "they didn't delete that line?" This is a MUST effect that cannot be avoided and is non-optional, per the conversation with the developer.  What this means is that your flak is black dice for almost all intents and purposes.  The ONLY exception is if you salvo a squadron you use the printed dice on your card (RRG p 5).  Otherwise it's only black dice.  I put this in similar terms with Draven fighting against Dengar-enabled Imperial squadrons.  "Oh I don't want to give them counter now!" No. He's turned on, as are these.  Black flak it is!  For further justification, "Resolving an upgrade card effect is optional unless otherwise specified. All other card effects are mandatory unless otherwise specified. (RRG p 6)."  THIS is a mandatory situation, there is no "may" clause in this case so your anti-squadron dice are black. 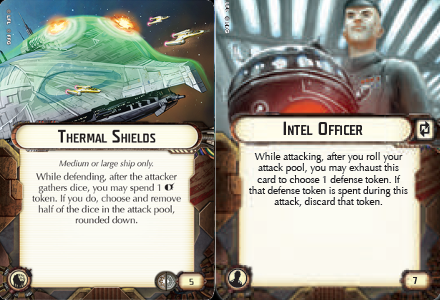 Ah, the big one and the reason I'm writing this article.  I've seen this argued about literally the last 4 days, each time with people having issues.  So we're gonna put it here and it's going to be contentious.  Thermal Shields states "While defending, AFTER the attacker gathers dice, you may spend 1 [brace] token.  If you do, choose and remove half of the dice in the attack pool, rounded down." Intel Officer states "While attacking, after you roll your attack pool, you may exhaust this card to choose 1 defense token.  If that defense token IS SPENT during this attack, discard that token."  Capitals and underlines in those sentences added at my choice.

Before I get further into this, we're going to link back to Eric's article on the attack sequence and my writeup on Intel Officer.  We also need to edit the Attack Sequence article at some point (because clearly I should give Eric more work...) to include the fact that Thermals has added a "split-second" trigger.  It's no longer as simple as "Declare target, gather and roll...." We now have a "1. Declare Target, 2A. Gather dice 2B. Does your opponent use Thermal Shields? 2C Are you obstructed? Remove a dice. 2D Roll initial pool. 2E. Intel Officer usage?"

The main takeaway from Thermal Shields here is that you HAVE to give your opponent an opportunity to choose to use to Thermal Shields or not in that step. We'll get into the card and its proper usage for best results in the eventual article, but you have to give your opponent the opportunity (hey look more quoting)! "Unsporting Conduct: FFG OP exists to create a fair, safe, and inclusive environment for all participants. Unsporting conduct violates one or more of these elements which are critical to the integrity of an event. Intentional or habitual violations of event integrity could result in investigation, pursuant to the FFG Organized Play Participant Suspension Policy. The Head Judge role holds the responsibility of being the final authority on whether unsporting conduct has occurred. Both the Tournament Organizer and the Head Judge are responsible for determining whether the unsporting conduct was severe enough to warrant disqualification of a participant." So don't be that guy.

So what does that mean here? It means that Intel Officer CANNOT, FULL STOP, force a brace discard.  Intel Officer's timing reads "is spent" which, per the English language, is a future conditional tense.  If this happens, then XYZ.  If it does not, then nothing happens. Thermal Shields happened and triggered already, earlier in the step.  As I referenced above in the Luminara bit, you can't double spend tokens (RRG p 5), so the brace cannot be spent again.  You CAN use Intel Officer to target all sorts of other tokens on the ship, but if it has already been spent (under Thermal, or another example, Barriss), it will not be discarded.  Intel Officer has an unwritten "[From this point forwards], if that defense token is spent during this attack, discard that token." IO is good but isn't able to look backwards in time; "is spent" means "from this point forwards."  Specifically BECAUSE you don't trigger IO until you want to, I can't have my tokens that I've "pre-spent" discarded from this.  Intel Officer cares from this point on, and it does not care about anything previously spent.

Thanks to Dras for the rereads, and Dras, Ian, and Karneck for clarifying these points over the last few days just to make sure these are all in order!