This is our second Pelta article, so prepare for the arrival of Ludacris and no Vin Diesel (apparently Vin wasn't part of the Republic). If you're looking for the REBEL PELTA, it's linked in that all-capitals bit right there. For the rest of us, set your wings to closed and hit the jump!

Identical in arc lines, movement pattern, and defense tokens to the existent Rebel Pelta, watch as I quote my own article from before (I'm done linking it, so anything quoted from it will be in BLUE).  The main differences between the Rebel version and the GAR version is cost and one significant slot.  The Rebels one clock in at 56 and 60 points versus 45 and 49 points, respectively.  All for the cost of one Fleet Command slot, but you do get a Fleet Support, making these the GAR flotillas or flotilla equivalents.  Just like the Rebel version, you have the "squad pusher" Medical Frigate (Command Ship) and the Transport Frigate (Assault Ship).  Both versions share:

If you're bringing it, you either want to be pushing squadrons somewhat with the Medical Frigate or likely using it as support for your bigger ships.  As opposed to the Rebel/Imperial flotillas that are often seen with just Comms Net, you'll often see a few upgrades on these ships in order to meaningfully contribute to the battle itself. Peltas CAN fly behind and throw tokens at your bigger ships, but you can do that for even cheaper with just a Radiant VII Consular nearby.  The Pelta is built to brawl and get out of there afterwards, even if it isn't brawling for a lot.  That's why you have other friends helping you fight, and what distinguishes each Pelta type from that Radiant build is addressed in each section below.  The Radiant is great at being a very basic Comms Net ship that will help your ships stay alive for very cheap, but the Pelta does a lot of different jobs better than JUST giving out a token a turn. If you're doing that, I strongly suggest looking back at a near naked Radiant VII (who has been updated, of course, to reflect this!)

Their navigational path isn't terrible for a red dice ship. You only add 1 dice when they get into blue/black of you, so you're very fine going slow and contributing artillery fire to help your big friends out.  This means that you likely won't want Engine Techs in the Support Team slot, a statement that may seem like heresy alright. Wait until we get to the builds section...

Just like the Rebel Pelta, their dice fixing is not easily acquired.  Rebels can shove Intensify Firepower on their Pelta so it can be sure to contribute. YOU, however, are going to need to put it on a Venator, but your Pelta will appreciate it, as will every other GAR ship in the fleet.

Command 2 isn't too bad to work with, especially when most of the available commands work well with your ship and the choices you've made for it.  Just make sure you're planning right for next turn.  Or of course, see below!

There's 2 titles for the Pelta and both have good different reasons for being taken.

TB-73 has the benefit of being extra tanky, giving you a second evade token.  4 tokens for a 50ish point ship is really good, especially when you can combine it with Reactive Gunnery on a Transport.  You should definitely have a free token to turn into a salvo for it. 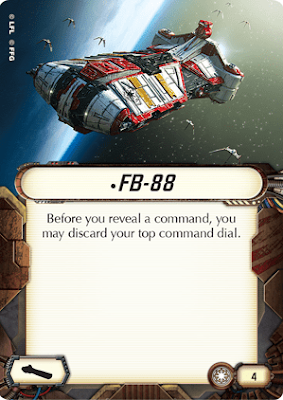 The illusion of choice!

FB-88 is a nice way of making your Pelta pseudo-command 1, but it's better than that. You can't be slicer tool'ed, you can't meaningfully be affected by the Comms Noise crit, and you can change every dial on a dime when the situation changes very fast.  You THOUGHT you were going to need to command squadrons this turn but turns out that your Yularen build needs them repaired? Well let's just fix that.... It's a Skilled First Officer that doesn't cost the officer slot and can potentially work every turn. What's not to love?

Coming in with one blue flak and being 11 points cheaper than the Command Frigate, we have our squadron pusher. The offensive retrofit slot and 2 squadron base allows for several different options you can slot it into, and it does well in them all.

Officer: Hondo if you need a spot for him, potentially Flight Commander if he's important to your build/squadron pushing plans, or Clone Navigation Officer if you need a lot of tokens to a lot of ships. Generally the Pelta officer slot isn't one I usually fill as their important supportive ships but I'm protecting other ships that I find more important and/or need those officers elsewhere. Your mileage may vary of course.

Fleet Support: Bomber Command Center for your real friends, or one of the other standard fleet commands if you have a reason for it.  Again, the Medical Frigate is generally the squadron pusher so have a reason for including it over the Transport.

Offensive Retrofit: The upgrade slot for this specific version, you can go mine spam with Proximity Mines across a few of your ships and not feel like it's a waste.  However, as we're usually squadron commanding, either Hyperspace Rings, Reserve Hangar Deck, or Boosted/Expanded as dictated by your plan.   I don't hate any of those choices.  Obvious statement of "don't use Rapid Launch Bays, you're speed 2" likely shouldn't need to be said, but I DID just type it. So..... Two blue dice IF you're double arcing doesn't seem worth paying for Disposable Capacitors to me, but it might or you?

Support Team: Fighter Coordination Team for speeding up those ARCs, maybe Auxiliary Shields Team to really increase your tankiness? But it should likely be FCT. I keep reiterating it; this is squads 2 so push squadrons with it. Don't overthink the ship, haha.

Should it be your flagship? You.... CAN, but it's speed 2 and not as tanky as you'd like a flag to be. I know one man who is making it their flagship, but he's also been flying Peltas for about as long as we've been writing this blog. I wouldn't personally, but I can re-evaluate this in a few months.

This ship is squadrons 3, and it pushes those squadrons afterwards with Fighter Coordination Team. It's not flashy and there aren't crazy insane tricks with it that you aren't seeing, but it's a workhorse that does better than a naked Acclamator-1 for 1 point cheaper. What's not to love (other than the cost, of course)?

This build is here to show you a Proximity Mines build. Keep it cheap, keep it simple, and please don't take more than 2 of these per fleet (if that). You don't move fast enough to take advantage of the deployment issues you're going to cause with the mines, but your other ships will be able to help. You, however, will make a great trailer, finishing off whatever your opponent has left once they pass your Acclamators and Venator.

Swapping blue dice for black dice and improving its flak, this sure looks a lot like the Assault Pelta alright. But with no Ordnance Slot! The terror.  We also traded a squadron and 4 points for a defensive retrofit (from the Medical Frigate, above).  What does that mean for us? That you likely won't be commanding squadrons alright!

Officer: Pretty much the same as above, Hondo or Clone Navigation Officer. You want to keep this bad boy cheap to fit upgrades elsewhere.

Fleet Support: As needed, potentially Comms Net or Parts/Munition Resupply. By the time your friend needs Repair Crews I promise you won't be in range, but go ahead, give it a shot alright.

Support Teams: I really like Projection Experts here, especially late game when you want to keep your tanky big friend alive. You can also put them on the Medical Frigate, but the cheaper version seems like a better location for them in my opinion. Everything else doesn't seem incredibly worth the points and should likely be ignored.

Defensive Retrofit: You need a good reason for this not to be Reactive Gunnery, and I can't really think of one, even if it is your flagship. Maybe Redundant Shields if you're pairing it with Projection Experts, but how many shields do you expect to lose from everyone and how fast?

Well, someone has to pay for IF, right? And with 2 rear red dice and IF, that's a relatively consistent and frustrating source of damage when your opponent shoots your little friend.

Comms Net/Munitions Resupply is a list call, but this exists to help your main Venator both get tokens and stay alive. You can shove most of these onto the Radiant VII, but this ship has shields to spare and can do other contributing damage while it's keeping your flagship alive.  Throw in Reactive Gunnery if you want, of course. The most basic of them all, with JUST a Comms Net, is also a fine choice to run as well.  Your call if the 6 points for Projection Experts is what you need or not.

The Pelta is not the flashiest ship in the galaxy, but it will support your band like a bass player or a really well-liked drummer.  Play the music and bring at least 1 if not 3!