The way you're going to distinguish your ships from one another, these specific clone officers all look so different from each other in how they interact that they.... wait, let me start again.  GAR Officers!

Adi Gallia is an interesting choice for an officer to be sure.  For each defense token you spend DURING THE DEFENSE TOKENS STEP (Waves in NOT-Thermal Shields), you can suffer a damage on an adjacent hull zone to the one being attacked.  Which means that you can spend a redirect and potentially move damage to 2 different hull zones at once, in a fashion (however many you want from the redirect, however many total defense tokens you spent for her ability). The real fun thing is when you can combine her with someone like Obi-Wan (who still gets to redirect and reduce the damage by 1) or Luminara (to refresh another defense token).  What's ALSO interesting is that she isn't an "exhaust to do a thing" card.  She just... DOES.  So long as you have shields and defense tokens to spend, well, you're gold then.

I like her on your flagship, acting as a soft, unpreventable redirect.  Everything they lock down is another damage you're not suffering, every token they let you spend is a damage mitigated.  She goes great with Obi-Wan, Luminara, and emergency redirects for a lot of the other GAR commanders.  For fun, her on an Acclamator means that if I spend a brace and salvo from a front arc shot, I can then put 2 into a side arc.... just how much I'd redirect if I was able to use that token.  If they've locked the brace, well then that turns into 2 redirected normally, and my redirect/salvo spend combination puts 2 into the OTHER side arc.  She's a weird second redirect that you need to use a few times to get the benefit out of, but the benefit is there. 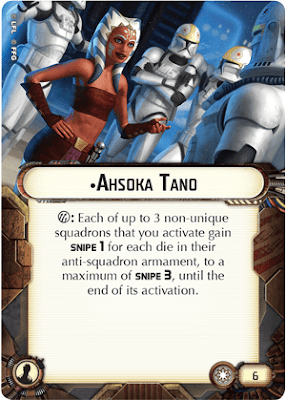 Ahsoka Tano goes on your carrier.  Snips gives out Snipe (ha cha cha) to 3 generic friends, which DOES combine with Nevoota Bee.  If you want to get even more fun; she gives out Snipe and THEN you can add Flight Controllers for what amounts to Snipe 4 (technically it's 3+1).  She goes with a fleet that (slash she gives out snipe) wants to bring Y-wings, ARCs, and V19s.  You don't really want to spam Deltas with her, because their anti-squadron 4 becomes snipe 3 and then Flight Controllers to 4 (when you could just use regular Flight Controllers for 5 dice instead).  Adept 1 is sure there, but why not just use the previously mentioned Nevoota Bee or whatever Venator-II you're bringing?  Bring her with V19s for in-built swarm in that case.  I like her a lot with ARCs as their slow speed and snipe lets them contribute to the squadron fight while still moving forward and getting there eventually.  And they can hide behind the V19s you're also bringing right?

Barriss Offee pairs well with a ship that's approaching from the side.  By spending the redirect, it acts as if you turned or flipped the ship entirely in 3D space; any obstructed or unobstructed shot or what have you on the original hull zone still occurs, it's just pointed at a different hull zone this time.  The easiest way to think of her is that by spending your redirect early, you get to adjust a different shield dial on that ship than the one your opponent pointed at; everything else happens normally.

The ideal solution is to spend the redirect to get shot on the opposite side, where you A) have shields already/still and B) won't take enough to hit the hull after that.  Because of the timing window, this occurs BEFORE Intel Officer, just like Thermal Shields, so it also can't be targeted by him then.  However, you've now spent your redirect during this attack.  Which means that any damage on that side is going into that side, full on (brace notwithstanding of course).  She gets around XI7s, in a fashion, in that you've chosen a new hull zone that can't redirect more than 1 damage from it.

Like I said, ideally, you want her to be able to push damage all the way across the ship.  If you push to an adjacent hull zone, why didn't you just use the redirect like normal?  You still CAN of course, and getting around your opponent's accuracies is its own reward, of course.  It's SOMEWHAT like a Tranquility effect, only instead of moving the shields around, you're moving the attack zone.  She fits well in a Luminara double Venator list, which makes sense as she WAS Luminara's padawan.  She also makes sure Mar Tuuk doesn't get all the fun times he wants to, and heck, you might even pull a dice from his pool...eventually!

Timing note: you spend when they declare a hull zone.  You choose when it's time to resolve the damage.  So if you're getting shot in the side and take 4 damage, you can just choose the front of your Venator (with its 4 shields) as desired.

Clone Captain Silver has a LOT of uses.  The easiest to see is the interaction on your Mercy Mission Consular.  But you can also put him on a large base and pull the handbrake to go from 3 to 1 to 3 on 2 turns.  However, no spending navigate dials (looking at YOU, Bail Organa!) or tokens.  He lets you go from 1 to 4 or 0 to 3, no 0 to 4.  But 1 to 4 or 4 to 1 can do some CRAZY good things, especially since he lets your ship do another command, like engineering or squadrons or concentrate fire.  He's not crazy flashy, but he'll get you out of trouble when you need to, and he'll get Jake and Elwood into the county assessor's office when you're on a mission from God your charger into the endzone to score Mercy Mission.  Invest 4 points for the chance to net 40? Yes PLEASE! Great combination in my mind, for sure.

Clone Captain Zak is a bit to parse, but he's very solid when he gets going.  You can exhaust him to add a die to a side or rear attack.  To unexhaust him, he costs a concentrate fire token, and you start with one on your card (so you'll get a minimum of 2 uses out of him).  He's a good way of getting a "double" concentrate fire on a turn, where you con fire out the front (using a dial) and then Zak out the side for the second.  This also works when you overshoot the target for a side/rear shot.  And it gets CRAZY with Most Wanted.  MW and Zak and a con fire means you can get 4 red each out the side and front arc with a Charger.  8 total red dice! I mention the Charger because that's really where he belongs best.  He CAN go an Acclamator, but a command 3 ship with a giant front arc is not where he wants to be, as he can only work on sides/rear shots.  Stick him on a Charger, nav for a bit, and start concentrating fire as soon as you double arc.  2 uses of him is worth 5 points, and if you can get 3 out of him, that's great value.
What about firing out the side with him and concentrate firing as well for ALL the black dice! Then you can trigger crits, right? That is definitely a build you CAN do.  I don't recommend it, but sure, jank like your life depends on it.  More dice spread across 2 attacks is in my mind better than more dice in 1 attack, but your mileage may vary.
Clone Commander Wolfe is the other way of getting raid in the GAR.  The first way is Hot Landing, definitely a card you can take!  He has 2 parts, so let's hit these in reverse order.
Each squadron you activate with the printed Assault keyword (this is future proofing) can spend a hit or an accuracy (future proofing, means that whatever has Assault will have blue or red die) to resolve the Assault effect (future!).  THESE SQUADRONS DON'T EXIST YET SO I'M MOVING ON.

Each of up to 3 squadrons without Adept (no Jedi or Anakin) gain Assault.  To get this, you're going to need to give up a hit icon, which can be a hit or hit/crit (no straight crits). You get to choose the raid token when you apply it, and I will say that V19s throwing raid out is mighty solid as your bombers follow up and hit a hull zone, especially since you can spend the hit to Assault them before they get to reroll anything (with evades, PDIC, or some other effect that occurs in the Resolve Defense Tokens step of the attack sequence).  Assault happens in Step 3, Resolve Attack Effects.  Now, what you do with that raid is a very good question, but I leave that to you.  My main issue with the card is that I have yet to fully figure that out myself.  He, like Ahsoka above, goes on your/a carrier.  I don't hate the idea of putting him with Plo Koon and raiding your opponent for Engineering as you drill into one hull zone with XI7s, preventing him from using a token to get shields back in that hull zone as you move in for the kill.

Clone Navigation Officer (CNO) allows you to pass around a free matching non-engineering command when you reveal a dial.  So let's break down why you might want to do this!
That last one is the easiest solution for why one would want to power up other ships with this officer, it's much easier to use 2 total tokens to gain the accuracy as opposed to trying to use a con fire dial at the proper time.  The question of if this whole setup of the officer and the 2 tokens and Clone Gunners is worth the officer slot and weapons team over the (H9) turbolaser slot is one you'll need to answer for yourself.  Personally, I like the setup myself, although Eric does not.  The benefit of CNO is that he untaps with any token, and he can with the one on his card as well.
Much like Zak (above), he comes with a token to untap himself.  If you get 2 turns of use out of him, he's as valuable as a comms net.  If you get 3, he's more than made back his value.  I PERSONALLY like using 2 of them and a Munitions or Parts Resupply to fuel 2 ships to full by turn 2.  Ship A reveals a nav dial turn 1 and takes a token, also allowing Ship B to gain a nav token as well (notice that he triggers off dial reveal, not dial resolution).  Ship B reveals a squadron or con fire dial, and they both gain those tokens.  The Radiant VII in the back reveals whatever she wants and passes 2 of its tokens to Ship A and B.  Turn 2, Ship A and B use that passed token to untap the Officers which will allow them to be used twice more in game (getting that value back!).  Shmitty proved that Garm and tokens are great and will allow you to be North American champion, so having 2 ships fueled with tokens on round 2 is phenomenal, and allowing yourself more tokens on rounds 3 and 4 is even better (you won't need them turn 2 as they'll both be full already!).  I know some people don't especially care for the Clone token strategy but once again, I like it.  It's an interesting puzzle to me, and I like solving puzzles.
Remember, no engineering commands with your clone boys, so if you're going to want those tokens, make sure it's a Parts Resupply in the back there.
Posted by geek19 at 6/18/2021