The (Jedi) Knight's (Re)-Watch: Rogue One

In the spirit of Worlds Prep 2019, I figured that the best way to prepare BESIDES having your very own montage (truly the most important part of preparations) would be to go back to the original sources of inspiration, see what we can learn from them all.

Because I'm stealing title ideas from my girlfriend, who still as of this writing has never seen one of these movies, join me below and see what you can learn from the Knight's Rewatch.  Today: Rogue One.  Read on below, and see how you can make ten men feel like a hundred!


The key to your list, whatever you bring, is knowing what you're good at and what you've practiced.  People may look down on you for what you bring or the choices you've made, but if you've been working with these objectives and ships for a bit, you'll know what works with your ships and squads and what doesn't  So long as you can answer WHY a ship or squadron or objective is in your fleet, you'll be alright.  People may not like the choices you've made, but if they both make sense to you and ARE the right call for the situation, then their opinion may not matter.  Listen to constructive criticism from your friends and what they're doing, of course, but at the end of the day it's your list and your life.  Run what you want.


We're heading into WORLDS, man! The best of the best, the cream of the crop, the Hera Syndullas in a sea of the rest of Phoenix Squadron.  What's your list's answer to fighting Bob Barker (AKA Imperial 2-ship, because the "Pryce is right...") How do you handle the coward Raddus Ford and his attempts to assassinate your Jesse James? Heavy squadrons with Yavaris? Ackbar BIG CHUNGUS? Monty Sloane's Flying Circus? You need an answer beyond "I'll figure it out when I get there" because as friend of the blog Yoda would say:

Handle your opponents, know what you're doing, and test against many opponents and lists.

Don't be a gloaty SOB if you win.  You're playing a game, amongst friends.  And be careful not to choke on your aspirations.


I've played a couple games against people with Solar Corona or Superior Positions where I've picked it, deployed in a corner, annnnnnnd then they deployed on the opposite corner.  Great.  I can TRY to get over to them, but best case is like a 6-5 or a 5-6.  If you're going to Worlds, I can understand wanting to place well and win your games.  But I didn't get a ticket to play keep-a-way for 6 rounds.  You want to place highly, you got to GO for it.  You want to taste that final table? Then remember that guts lead to glory, and you gotta ask if you have guts.

There's a line from Mystery Men, which is a great underrated movie in and of itself, where the team has to learn to both believe in themselves and their powers.  They end up repeating the lines "I believe in my powers, I believe in the powers of my teammates.  I trust in my powers, I trust in the powers of my teammates." All of it said with.... various degrees of conviction, hahaha.  You have to understand both A) what your list is trying to do and B) what you're willing to sacrifice to do that.  If you need that ISD dead this turn, you may have to risk flying those B-wings out of commandable range next turn.  YOU are going to have to trust in your list, trust in your ships, squads, and build, and trust in the Force.  But at the end of the day, you may still have to risk someone's life (or even sacrifice it!) for the greater good of your win.  Trust in the Force, trust in your ability, and trust the dice. 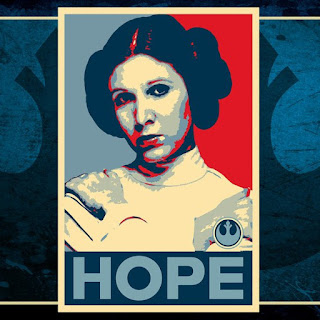 But it all comes down to one risky mission, one last shot, one attempt to save the Rebellion, the dream, the 10-1.  And I'll be there, running what I know, believing and hoping and praying that Leia can do it all for me.  You can't have fear or doubt in your abilities.  The one thing you can have is hope.  Hope for the future, hope for the next round, hope for the dice roll, the crit, the card, the opponent's choice, roll, everything.  Hope for the best, plan for the worst, and trust yourself and your friends.  And always have hope.