The (Jedi) Knight's (Re)-Watch: The Empire Strikes Back

It's like you can guess the next article as I write it!  We continue with the Empire Strikes Back, the one I never actually saw in theaters.  Is this just a bunch of Yoda quotes?  Are you too afraid to look?  Because I'm not!
There's a stubbornness to Han that I think we all like and admire.  The fact that he's right more often than not and is in actuality a decent guy is something I know I aspire to.  When everyone thinks the odds are against him and Luke is dead, he still goes out there and saves him.  So when you think the chips are down and everything looks against you, sometimes you just gotta tell that voice in the back of your head to go screw and that you're going out there.  You're gonna fight and you're going to give it your best, even IF things look bad (especially if things look bad).  Go out there and DO.
It's getting to the 11th hour, but right NOW don't be afraid to cut something that isn't working for you.  If you can't get Yavaris and squadrons on target in any of your tests, figure out if that's a result of your opponents having your number or if it's from you not knowing what Yavaris can do well enough.  I tried slipping in Yavaris a few times into my current fleet (more on that in a week, of course...) and just kept hitting a wall where it wasn't what I needed to be flying.  I know, a Rebel fleet without Yavaris seems like craziness.  But if it's not working for you, or Screed isn't what you need, or you lose squadrons faster than Rieekan can keep them alive.... you've got a week and a half (there was time when I started writing this!), better to switch NOW than to stay with what ISN'T working.

See that rejoicing by the Rebellion when one of them gets away? And it's a flotilla!  Conserve your points, guys.  Yeah, it's JUST 27 points for Bright Hope Toryn Farr.  But that's 27 points your opponent won't have if you can get it out of danger before it dies.  You can rejoice in your triumphs after its over, so long as you have triumphs and you have ships leftover.  Just make sure you HAVE some.  Don't throw your ships away if you can help it.  And take your wins when you can.

Back in the late 1990s, I got a Nintendo 64.  And it was AWESOME.  Got to play Ocarina of Time, Banjo-Kazooie, Goldeneye, and most importantly Rogue Squadron, seen in all its beautiful graphics above.  I was flying Y-wings and X-wings and sure, A-wings/B-wings, and that V-wing one time (ugh not as cool as anything else, ugh ugh ugh)... but every like third mission, you HAD the choice of Snowspeeder or.... Snowspeeder.  It was a walker mission, every time.  EVERY TIME.  And the controls, as advanced as they were for 1997, were.... mediocre.  Listen, I loved the game, but it was mainly because SHTAR WARSH!

Anyways, you had to play the mission to proceed, and you inevitably had to fight like 3 walkers and pull them all down.  Just you.  I have no idea where my wingmen were, but apparently I was carrying Rogue Squadron in its entirety.  Watch out Imperial pilots, John is here!  And the aggravating thing is to get the best times and medals and fancy upgrades and all, you had to replay ALL the missions (of course) to get the secrets and best stuff for later use.  So inevitably there was one Saturday where I just sat down and started playing walker missions over and over again, to get those best times, in order to never need to play some of them again (rescuing Madine was fun, though...)

Why am I telling you this? Well, there's been tournaments where I've seen people make the wrong call on objectives "because they just played Solar Corona 3 times already."  You have to go into each game as fresh as you can, with a fresh perspective.  I've won or lost games on objective choice when people look past the Most Wanted and instead choose my Hyperspace Assault instead.  They just had a "bad" Most Wanted game, and they don't want to repeat the mistakes, so that's out.  Which I personally appreciate.  Each game is a new walker/player.  How do you take em down?

Hahahahaha, ohhhh, the games I've lost and seen lost by people quoting this right before they fly onto one.  The minute you say this quote, your deck turns into nothing but Comms Noise and Projector Misaligned.  Don't screw yourself over, and watch out for Dodonna, King of Rocks.

Yeah, like I'll pass THIS one up.  Make sure your ship has an exit strategy or a plan for what you do if it DOES die when you're flying it towards something.  If I throw a Raider at an ISD, I better be either aiming for its side arc or jumping it with my first activation next turn.  If you slow to speed 1 or 0 and intend to stay there, make sure you CAN get your ship out with a maneuver order next turn, or at the very least a dial.  Else you gonna DIE.

I've played against Nathan, I've flown against Eric, I've.... been at the same conventions as JJ (Listen, I haven't fought EVERYONE), and the important thing to remember is that everyone is mortal.  People DO make mistakes, and you can't go into games just expecting to lose because of your opponent.  End of the day, it's still a fun game of Armada with your space bros, right?  Don't treat it as anything different than the dozens or hundreds of games you've already played and it'll work out fine for you.  I'd love to claim that some of these guys aren't any different than any other opponent, but if you go in terrified and expecting to lose, you'll end up losing for sure.  Don't give them the game from the start.  Fly casual.

Belief in yourself and your list is the strongest force you have.  Knowing what you CAN do and where you CAN go is the best play you have, as your opponent doesn't know it as well as you (barring a mirror match).  You've been practicing for some time with your list, commander, and maneuvers.  It's time to bring it all together, and faith in yourself is the best thing you can bring with it.  The only ally you're getting is what you bring with, and right now? That's the Force, baby.  Trust in the fact that you know what you're doing and what you're planning, and you've got a good shot at it all. 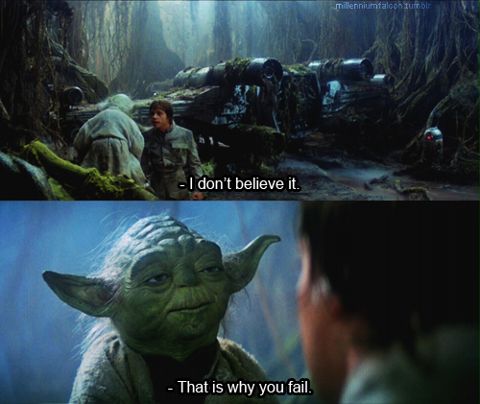 When you doubt your opponent's list, when you doubt your opponent, when you doubt yourself... that's when you run into trouble.  You can't expect to roll up and win everything and for your opponent to roll over and be dead.  You have to have the confidence to go in with the list you know what you're doing with, and you have to believe it's right.  If you start to doubt yourself or your list, you're gonna start playing scared and it's gonna affect everything you do and then BAM! You got a ship killed.  And then another.  You're doubting everything you've ever done and you're DONE.  Stop.  Breathe.  Believe, man.  Gotta believe you can win it all, gotta believe you can be at that final table.  And believe in yourself.  Not in the you who believes in me, not the me who believes in you.  Believe in the you who believes in yourself.

This is the important one here.  March 28 (Wednesday night) at 7 pm, huge Armada nerd meetup at Bulldogs Bar on Golf Road.   1480 Golf Road, Rolling Meadows, IL.  There's also breakfast on Friday at Egg Harbor on American Lane at 8:15.  Join us, hang out, chill. We're going to have fun at Worlds, so don't stress out about it, ya know?  Plus, you know, breakfast food and alcohol.  Ron Swanson would be proud of you.

Thank your significant other for letting you spend 2-3 days with your nerd bros playing a game for 8-10 hours every day.  And make sure you take them out next weekend, too.  After all the prep I've been doing, the girlfriend definitely deserves it....

So, you're losing.  You're in a bad spot.  Remember that the ending score matters, and if you can salvage SOMETHING from this, that's the right call.  Don't run your ships into danger if preserving your loss helps you more.  A 3-8 is worth more than a 2-9, even IF his ISD dies or whatever.  Running and discretion are sometimes DEFINITELY the smart play there.  I know locally I'll play games and then just decide turn 3-4 to turn back into the fray when the smarter plan is to ACTUALLY leave.  Make sure you do the right thing at the right time; be it swing back in for the last attack to press your advantage or running to preserve your points.  How will you know what the right call is? Figure out the situation and go from there, haha.
Let's talk about the importance of getting things right.  The usual quote by the yokels is "Luke, I am your father." And the yokels are WRONG.  He says it as above, and it's important to get things right.  Similarly, it's important to get it right if you're playing Solar Corona or using Engine Techs.  I'll refer you to Eric's multiple REALLY HELPFUL posts on the subjects of the correct ways of using steps.  What's the ONE time you're allowed to use Intel Officer? When does Hondo trigger? If it's PART of your fleet, know it's timing and windows backwards and forwards, otherwise the judge is allowed to call you wrong AND refuse to let you use it the way you want to.  "That's how we do it back home!" But we aren't there.  Add-effects, triggers, timing, know what you're using.  If you have questions about anything's timing window, ASK YOUR OPPONENT.  Or, if they don't know, CALL FOR THE JUDGE.  Don't get yourself screwed because of how you know the rule versus how it ACTUALLY is.