"Forking" is a term that originated in chess, and it means using a piece to safely threaten multiple (usually 2) enemy pieces at once (note that in the picture above if the black bishop takes the forking pawn, it will be captured by the white queen). For all two of you who have never played chess, because play alternates back and forth, this means that your opponent will have the opportunity to move one piece to safety but the other is quite likely doomed when play returns to you. In Armada, you can do something fairly similar due to the activation mechanic. Learning how to do this well is a useful, but particularly so for a sly second player.

Classic forking
What I think of as the "classic" forking maneuver in Armada is threatening two enemy ships at once with one ship. This is best done with shenanigans that allow placing ships like through Hyperspace Assault or Admiral Raddus but getting a later activation with a powerful ship capable of getting its positioning just right can set up forks as well. Look to punchy but sneaky ships like MC30s and Gladiators for this kind of thing, but you can also do it with longer-ranged and/or mobility-enhanced speed 3 large ships too.

Setting up a fork offers you a few things. As second player, the direct benefit is even though you don't get first activation, the first player will only be able to save one of those ships by activating it first, offering you access to a sweet early-round strong activation that's not always available to you as second player. Regardless of your player order, it puts pressure on your opponent to activate whichever of those (presumably) two ships he wants to avoid damage/possible destruction the most, which can compete with what he would have otherwise wanted to do with his activation order elsewhere.

The goal here is to credibly put the fear of God into 2+ enemy ships at the start of next round's Ship Phase, neither of which can just kill you and leave. Some examples: 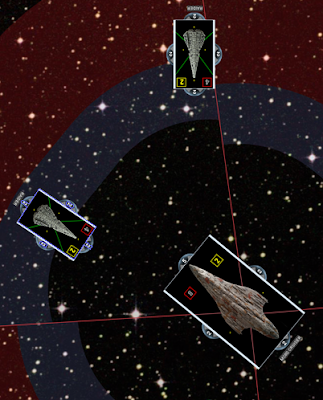 The first example is from the anti-MSU article. The LMC80, when activated, should beat the tar out of those two Raiders (thanks, Gunnery Team!) and so the swarm/MSU player needs to decide which of those two Raiders gets activated first and gets to live and which one will become space debris. My money's on the one at close range being the lucky winner, as its possible attack is most powerful and it's most likely to be able to escape the LMC80 altogether during its move. Sorry, medium-range Raider. 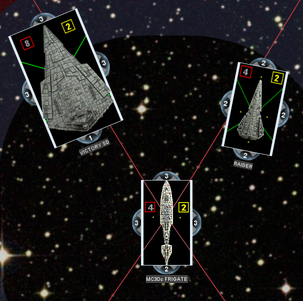 This example is from the Hyperspace Assault objective analysis, showing what a well-placed Hyperspace Assault MC30 can do. This is a fairly ideal fork, as the MC30 can attack either ship from two arcs, and if either of them activates early to escape (they should!) the MC30 has the option of throwing a lot of hate into the ship that stayed behind and then chasing after the escaped ship to pressure its activation in future rounds.

In short: fork early, fork often. Especially as second player to keep the first player on his toes. Let's get into the weeds a bit more with...

Fleet forking
"Fleet forking" (my own weird term, I acknowledge) takes the basic premise of classic forking and applies it to fleets in general. Due to alternating activations, you're trying to achieve parity in high-priority activations as second player by getting an even number of threatened enemy ships to mostly neutralize the first player advantage. As first player, you're trying to achieve superiority in high-priority activations by threatening an odd number of enemy ships. Clear as mud, right? Don't worry, some examples are coming!

Before I get any further, I want to note that squadrons can complicate things and can be used to fork ships that otherwise might escape their threat range (especially with Yavaris, which telegraphs its intentions usually and can present players with an obvious "if I stay here, those double-tapping B-Wings are going to wreck my face"-style problem). That said, they make the example images even more visually busy, so I'm avoiding them for purposes of these examples. 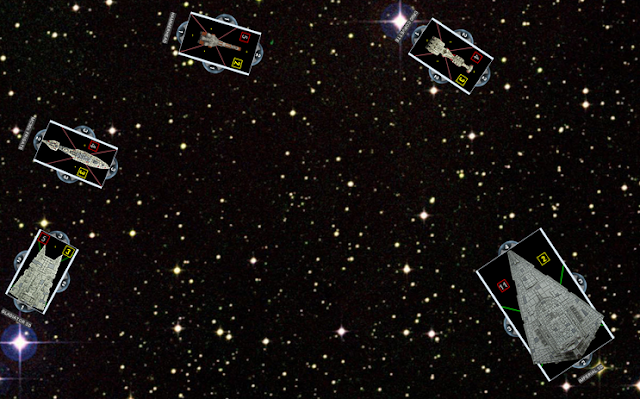 Anyways, in the image above, it's the top of the round and we've got an MC30 and Gladiator each squaring off and a CR90A at medium range of the front arc of an ISD-II. A Torpedo Hammerhead is floating around not particularly threatening to or threatened by anything. Each side is threatening 2 ships and each side would really love it if somehow they could bribe a judge to let them activate two ships back-to-back to get maximum damage in before their prey fired back and/or got away. This setup presently is roughly equal to both players (sheer points of ships favors the Imperials, but that's besides the point), regardless of their player order - one of the first player's ships (Rebel or Empire, doesn't matter) is going to get to do what it wants, and then the second player is going to wallop whatever was left behind on the other side and run for it, if necessary. The Hammerhead is going to sit there watching, doing nothing much (for now). Because each side is threatening 2 ships, this is a situation that favors the second player, as they'll have the benefit of their objective and "fleet forking" has evened out some of the first player's initiative advantage.

The first player should endeavor to avoid situations like this; if we assume that the Imperial player has initiative, they would have preferred to only have either the ISD at range of the CR90 or the Gladiator drawing a bead on the MC30. They could have activated, done some serious damage, and then watched the enemy fleet kind of durdle around, hoping to set things up well for next round. 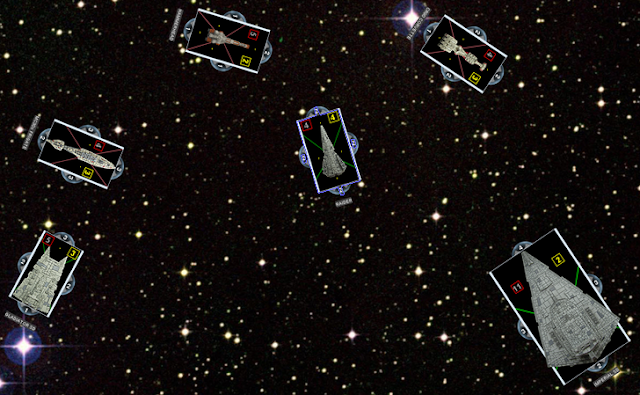 This kind of concept is easiest to see when the ships are mutually threatening one another, but even just wanting to activate a ship that wants to leave before it dies can constitute a high-priority activation: 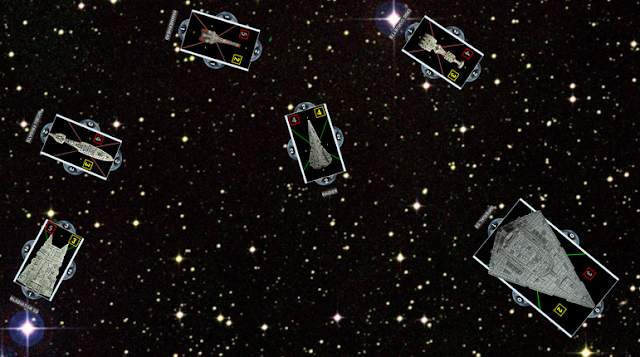 Here all we've done is put the ISD very close to death (3 hull remaining, 1 rear shield, and understandably fleeting from the fight) with no chance whatsoever of killing the CR90A that's double-arcing it. The decision made about the first activation of the game is going to determine if the ISD lives or dies: if the Rebels have first activation, is it worth going first with their CR90 to finish off the ISD at the possible cost of their MC30 or Hammerhead? If Imperials have first activation, is it worth running the ISD away to escape death and preserve points but at the cost of the Gladiator or Raider? That's pretty circumstantial, but the situation still has each side with 3 high-priority activations, even if one of them is focused purely on stepping on the gas and getting out of there.

There are a few remaining wrinkles about fleet forking that I wanted to touch on, and I'll use a variant of the original example: 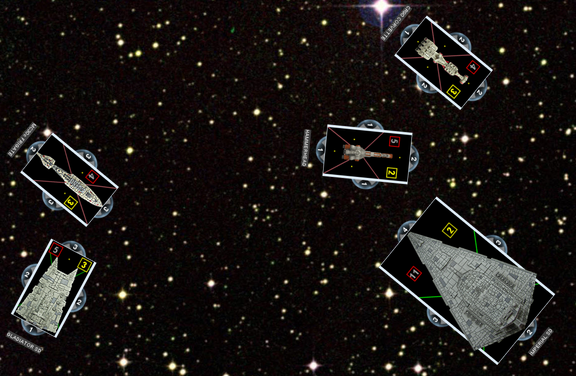 The Rebel player has 3 high-priority activations. The Imperial player has 2. Who benefits, depending on first player? All things being equal, usually use the higher value to determine who benefits, but it's rarely that cut and dry, so it depends. Not very satisfying, I know. If the ISD-II has Gunnery Teams, then that changes the math pretty substantially (...usually it will). The MC30 having enough defensive upgrades might allow it to live through a Gladiator double-arc (thus decreasing the priority of its activation in favor of saving a corvette if possible), but then again, if the Gladiator has Engine Techs, maybe a double-ram will be enough to finish off the MC30 regardless.

There's also the issue of threatening with ships that are themselves threatened by other ships and can be removed. Be careful not to count on applying pressure against enemy ship A only to have that threatening ship be destroyed by easy-choice-activation ship B.

In short, use the high-priority activations odd vs. even as a guide, but the priority of the activations can differ depending on circumstances, usually due to upgrades and/or the board state (how healthy is such and such? how much of a threat does X pose? etc.).

Final thoughts
With experience, you can start to master the basics of forking by understanding how much pressure to apply to an opponent's fleet at the right time based on your player order to minimize your disadvantage (as player 2) or maintain your advantage (as player 1), either of which can be crucial in a given game. If you have any questions, let me know!
Posted by Eric Taylor at 2/05/2019