The Sum of All Things

BIG ol' title there, huh (pun intended)?  Let's hit a few major points in no certain order (minor NSFW bleeped words below, so, uh, if you have kids, watch out there). 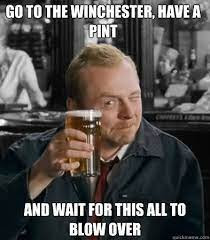 1) The State of the Blog

As some of you may have noticed by now, we merged with the Steel Strategy guys into Blissfully Ignorant Gaming.  We have a Discord and everything, where the 5 of us talk about all sorts of different gaming that we do. THIS blog is going to stay Armada-related, and any Armada-related projects or news or what have you that we do will be on here.  I have plans myself for a bit more on deployment, and I have at least two more tournament ideas before the end of the year. But more on that in a few months.  The blog continues, as blogs are wont to do.

"So if the blog is continuing, where's my content darnit?"

Well, about 2 months ago I PERSONALLY moved to Kentucky to live with my fiancee, who I'll be marrying soon, so my output for a bit is limited.  Eric, our other usual narrator, has started a new job recently now that his child has begun school.  Shmitty has started school back up again, so the other 4 of us will hear from him in October.  Biggs has also started school/work and if my numbers are right, only has another 8 straight weeks without a day off.  And lastly, Truthiness has two kids starting up in school, a new assignment at work, and has recently used the fact that we're a GAMING group/discord/blog/party to focus on his new games, Dropzone/Dropfleet.  Perhaps you've read some of his work?

I've dabbled in the DropX universe before Eric and I got into Armada and it was a very fun time.  My current gaming habits lend themselves more towards "fetch" with the dog, but I'm also getting into Blood Bowl (I have a team to paint and a brother-in-law to face at Thanksgiving) and Shmitty has gotten me into Crisis Protocol.  I also want to play more Marvel Champions, but I AM currently getting an Armada group going and playing that almost weekly.  Which brings us to Armada and the meat of this article.

3) The State of the Game

So that sure was an announcement from AMG, huh? As I write this, it's been 5 days and the community is STARTING to settle.  I didn't WANT to write this article, but since we're all still going nuts, I took a shot or two of liquid writer's helper (Glenfiddich 12 year) and started in on this.  Which, now I have to do subheadings, so I hope you're happy.

What the Announcement Means

So we're not getting Armada in 2021.  We knew this of course, but the announcement confirms this at the moment.  It also states that they have nothing currently in development, and since the development cycle is ~18 months(?) that means we won't see any new product next year either.  I've been assured by a friend or two who are working with AMG that the company is trying to get a developer on board who understands both what makes Armada work and how to design things for it.  You wouldn't want someone who's been working on Warhammer 40K or Warmachine or Dropfleet to just start on Armada tomorrow, right? They apparently need time to get the designer(s) up to speed, and I'm fine with them taking a few more months to get them there.  They put this out NOW to head off the fact that they won't have anything to announce for Armada at the latest Ministravaganza.  (Side note: do you REMEMBER the abilities they handed out like candy at the first one of those? Do you SEE what I'm saying about "needing a developer who understands the game"?)  I'm not HAPPY that it's taken this long to get them to this point, where we're STILL waiting for new Armada news.  But Armada has been dead before, and we all know by now not to count out the game until turn 6, right?

Is the game dead? Not currently.  Anyone who's telling you that is trying to read THE WRITING ON THE WALL and I'm too damn busy to deal with naysayers and those who aren't working with AMG.  Is the game WOUNDED because of this announcement? Oh my yes.  And that has led, in my opinion, to our next subheading. 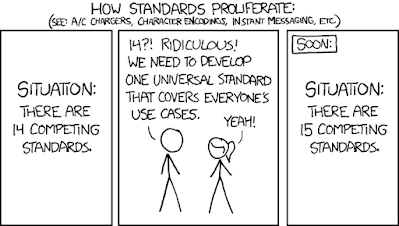 As of now, 5 days after THAT announcement, I have seen, no exaggeration, 7 different people trying to create the Council to Intensify and Save Armada, the Real Extreme Blissful Enlighted Lovers of Armada, Guys who Armada Realistically, and Independent Material Players of Armada. And the Armadan People's Front, the splitters.
First, let me state that I love the community's enthusiasm. Many of us got into this game for Star Wars, because our friends got into it, or because we heard we could fly with Leia Organa. In my opinion, and I've heard this echoed from several people I trust and like in the game, if Asmodee would promote this game instead of treating it like an unwanted sweater at Christmas, it could actually grow into something huge.  BIG even (the puns don't stop, guys).  They would be fools to let the game die from inaction, no matter how small of a community we seem or become. I don't know what their plans are, but the dedication we show to this game is one worth reckoning with.

That all being said, and again, I appreciate your creativity; stop making homebrews right now and trying to get everyone on board.  We JUST got 2 new releases a few months ago, and I promise you haven't solved everything.  Yes, even you.  I've been on the playtester team for a few of these waves and I guarantee you that game design and minis design is harder than you think.  Hell, UPGRADE design is hard; look at all the caveats on SPHA-Ts (wave 10), Wedge officer (wave 8), and whatever the heck Hot Landing is trying to do (wave 10).  Those JUST came out and there's still ways of manipulating them.  I UNDERSTAND you want to save the game RIGHT NOW before it dies in 20 minutes, and you personally need to jab Mia Wallace Armada with the adrenaline needle to get her back to life.

AS NICELY AS I CAN SAY THIS, I HAVE NOT SEEN A GOOD HOMEBREW DESIGN EVER.  I don't want to be cruel, but I was on the wave 8 playtester team.  With an FFG designer.  And if you think there's no issues with the Onager or Starhawk, well, buddy, you enjoy them.  But that FFG designer was able to lead us all and provide ships/design to evenly help both factions.  If you're trying to get a council to design, I'll point out that a camel is a horse designed by a committee.  If you're the main lead for this project of yours, the nicest way I can ask: why should I care about you and your design?

To those who say "well when X game or Y game died, this council of muppets showed up and created some fan made content that brought the game back to life and suchnsuch." IF Armada dies, you can then be rest assured that I'll keep everyone as informed as I can about any council of elder millennials formed to save the game (even if I'm only brought on as scribe because of my 96 wpm typing).  UNTIL that time, let's try a different tack.

What SHOULD We Do

Having recently talked to a games designer, they pointed out a few thoughts.  First, that designer is not going to join any club/council/meeting/buffalo order you design, as it makes any attempt to either join this franchise or work with it dang near impossible, or at the very least insanely difficult (and any attempt to work with OTHER gaming companies hard, too).  So stop badgering former Armada lead developers with ideas, I promise they're good right now (any Armada developer who DOES want to disagree with me, well, my email is above and I'm available....)

Secondly, the developer suggested that IF you want to create a homebrew , the successful ones in the past have been things like either Sector Fleet or X-wing's HOTAS; ones that DON'T TOUCH THE CONTENT. House rules for new things are easy to get buy in if they're few in number and don't require much thought on doing so (relatedly, I was doing this with Highlander and Who's the Bossk without knowing it!). If you're going to make a homebrew, please don't start spamming all the chats with your new Lucrehulk design on 4 different bases and they all move independently of each other but this is balanced.  Instead, a) hit up a few friends and b) test your system/new game design out.  I'll be quite honest that WtB worked well! Highlander.... sure has been a system (those playing it who like it, feel free to disagree with me? I just am not as ecstatic as I thought I would be). But I have ideas for next time.  Try a fantasy football-esque draft, try an altered RitR campaign for the GAR/CIS.  Try SMALL CHANGES, not BIG ones (this is the one time that I don't advocate BIG stuff, haha).

What you should ALSO do is keep things going at your local friendly game store.  Let them know that you want to keep playing Armada, buy things from said store, and keep talking to your local guys about getting more games in.  Try a 300 point tournament, try a 500 point tournament, try some other stuff to get some new content and ideas and creativity going.  My friend Jack ran a live Who's the Bossk tournament and said it was super fun. I have a few plans for a tournament in a month or two.

Go out there, have some fun with the game, try some weird stuff or some weird commander or build you haven't in a while, and try to keep the actual community around you going.  Get vaxxed and get your friends together to KEEP. PLAYING. GAMES. The death of Armada comes from people not playing Armada, and the sooner you start playing Armada again with your friends instead of doom and glooming or attempting to actually save Armada, the sooner you'll have a good time again.
Posted by geek19 at 8/26/2021