What's up?  It's Biggs writing a blog post for once. Welcome to September, which means the year is almost over!  It's time to do something interesting for Star Wars Armada.  So, in the interest of doing something interesting, we're going to run the first ever Armada Nuzlocke League! 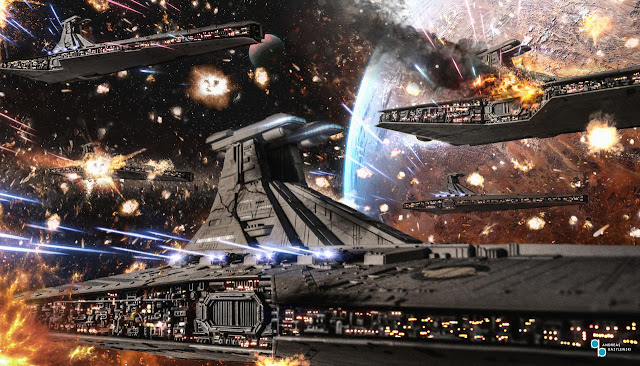 What is a Nuzlocke?

So, in Pokemon, a Nuzlocke run is a way to add additional challenge to what is not a particularly difficult game.  The basics are that you catch the first Pokemon in each region you go to, and that you lose access to that Pokemon if it is ever KO'd.  This limits the selection and availability of your Pokemon, and makes it so that you need to play a much different, strategic game.
See https://bulbapedia.bulbagarden.net/wiki/Nuzlocke_Challenge for more info.
So, how do we do something like this with Armada?

When signing up each player must pick a faction as well as 6 commanders from that faction.  Each player must also select 4 generic squadrons, as well as 4 unique squadrons corresponding to the generics.  At the start of each game, players will simultaneously reveal a 400 point list built utilizing only ships and the available squadrons / upgrade cards, and then play a game with that revealed list.
The League begins with the 6 commanders selected, 4 of each generic squadron selected, 1 of each unique squadron selected, and 1 of each non-commander upgrade available for list building.  At the end of each game, if a squadron is destroyed, or if a ship with an upgrade equipped to it is destroyed, that squadron or upgrade is removed from the available list.  Also at the end of the game, any commander upgrade not destroyed is "locked" and cannot be used again during the league.  Locked commanders will be available during the playoffs.
Banned Cards:
Corvus
Effectively this means that all upgrades are "unique" upgrades.  You'll only be able to field a given upgrade on one ship, and if it's destroyed it's gone forever.

Also for squadrons as an example:  If you pick X-Wings, then you can pick either Biggs, Luke, Wedge or Rogue Squadron as your corresponding unique.  If you want Jendon, then I hope you enjoy the 4 Lambda Shuttles he ships with.

Players will be divided into Divisions of 7 players each*.  Each player will play 1 game with each player in their division.   At the end of the Divisional Stage, there will be a short elimination tournament consisting of the top player in each Division, plus Wild Cards as needed.
This means 6 games, plus the playoffs.  *If we have less than the required number of players in a division or divisions, we'll pair up players to play twice.  They playoffs will be short and sweet.  I'm thinking 6 weeks to schedule 6 games.
Going to open the league to both TTS and Vassal gamers, who will be in their own Divisions, so be sure to specify when you sign up!

New Objective:  CHAOS BRAWL
There is only one objective that will be played, and that objective is:
Chaos Brawl
Setup:  Place obstacles as normal, removing the station and adding 2 additional debris fields.