In the realm of "better late than never", I decided to craft a post for the GAR and CIS beginner player, for how to get into the game for Under $250, just like the previous Rebel and Imperial articles.  This article has the benefit of both coming as a result of those AND allows me to make some edits and thoughts based on what I've learned from those articles, AND we're able to combine those articles into a way of "what should I run as a starter fleet with this faction?" I ran into this instance last week myself, as we had a new guy who I had to cobble a fleet together for him on the fly, and I'd prefer not needing to do THAT anymore! Onwards with the article!

The benefit of doing this is that a lot of things cost very similar amounts of money; the GAR fighter pack costs the same as the CIS fighter pack, so I can almost interchangeably write this article.... until we hit a few different spots.

Our rules, as stated previously by Eric and myself:400 point fleet, $250 max.  As Eric mentioned, PLEASE buy at your local game stores whenever possible, as they let you come in and play there all the time, generally with helpful employees, friendly counter staff, and hopefully a good and growing community.  To DIRECTLY steal from Eric's article (thanks for doing the work for me, man!),

I also want a selection of ships that are very easy to expand off of for when we want to bulk out our options more and try other commanders, so in general it would be ideal to avoid doubling up on ships or squadron packs early on. I want newer players to be learning lots of different elements of the game, seeing what they like and don't like, and being able to cheaply progress outward bit by bit towards other archetypes that interest them without having to make another big $250+ investment all in one go again. Finally, the fleet in question is going to have to use upgrade cards available only from the items purchased themselves - no snagging cards from eBay or borrowing from friends - those are perfectly acceptable things to do, but we can't assume that everyone can or wants to do either of those right away.

GAR
You're obviously going to want to start with the GAR starter; 2 great admirals, 3 wonderful ships, it's a perfect way to begin.  I find myself including that Acclamator or one of the C70s more often than not in a LOT of the lists I bring, and I like bringing them.  You're going to want at least one of the fighter packs and the upgrade card packs so you can start ACTUALLY customizing these ships.  Because of the potential for rolling a bunch of dice, you're going to want a dice pack, and if you're flying for the Republic, you obviously joined so you could grab your own Venator.  So rounding out the starter purchase:

All that for $225! That's a solid core, AND the list you're going to make for it looks a little something like this.

It's a little token generation heavy, but this shows you the basics of a Republic fleet, allowing the ships to all end up supporting each other. Bail is here to help you as you learn the basics of Republic navigational patterns ("Hope" is a navigational plan!). If you can pass the tokens, getting the free accuracy when needed with Clone Gunners is both a slight dice modification for your dice, allowing you to reroll one, and also showing you that "en masse" fixing isn't really a thing GAR does.

Next purchases:
The FIRST thing you should be buying next is a Pelta.  Truthiness would tell you that it should be part of your starter set, but the problem is that buying it takes you to $265 ($255 if you don't buy the dice pack, which is STILL over our limit). You REALLY need one, but our initial arbitrary limit prevents it.  PERSONALLY, I'd buy one over the dice pack immediately and then buy a dice pack later.  But, our limits ARE our limits and I can't go back in time to tell 2017 John to update that article's numbers again. If you have the $5, buying a Pelta is going to do SO much work for you.

After you buy your FIRST Pelta, you can start buying a few more squad packs if you enjoy running squadrons heavily, or start grabbing a few duplicate ships as desired.  In fact, let me just detail your (current) FINAL total purchases for GAR.

Do NOT go out and buy all of these immediately; this is me saying "I've seen double Venator lists that aren't goofy memes, I've seen 8 Y-wing lists, I've made many lists with dual Peltas."  I haven't seen a 6 Pelta list that I would describe as anything more than "sure, try it once online and see how much you like it." I technically own a Vic, someday I might get a second.  We'll see. I've seen ONE triple Venator list work at Adepticon, but I think you can do it better with 2 Victories now. I think Theia would agree with me, but you'd need to ask her. Don't buy 3 Venators.

"So I should go buy 15 Venators right? For my 8000 point game that takes all weekend to move 1 turn?" No. Stop it. Don't go full warhammer army on this until you've played several 400 point games and even THEN I still don't recommend anything past 800 points.  Go put your money in a bank, I'm sure by the time we get another wave you'll have earned enough in interest to get a new ship or two.  If you can PROMISE me you're going to play a full 8000 point game EVERY weekend, then sure, go give AMG more of the money for ships that will see your table.  In this game that they're DEFINITELY going to keep supporting.  But I'd still be hesitant, myself.

CIS
This may sound familiar, but let's start with an upgrade card pack, starter set, dice pack, and 1 set of squadrons. So different from anything above! After that, it's really a choice of if you want the Recusant or if you want the Invisible Hand. I'm going to steer you towards the Recusant, but the IH is a valid choice also.

And what sort of list do we get from that? Well, here's what I was able to cobble together (with Fox's approval/"yeah that seems ok")....

This fleet has a good amount of dice fixing with Kraken and all the reroll mechanics, especially that Patriot Fist, but the one thing it lacks is token generation.  Rune and Tikkes are in-faction, but Tikkes comes in the Invisible Hand pack. I put a lone Comms Net in, but for a start of "learn how the faction works" this should get you moving along.

Next Steps:
If you bought the Recusant, buy an Invisible Hand.  If you bought IH, buy a Rec.  Semi-obvious answer is semi-obvious, but hey! Add another squadron pack if you're getting to that point of enjoying those as well.  And let's get to the final totals for CIS as well (again, do not start out buying all of these, be smart about this)

It's a "nicer" faction in that you don't need to go ham on squad packs, but I've seen many viable lists with 3-4 hardcells or 2 Munificents in them. Buying a second starter pack seems like the dumbest thing ever, but I promise you will get good use out of all of those ships.

Again, don't go ham on buying all of these at once; go in slow and purchase what you want/need as you go. I've SEEN the 4 Recusant list, I've yet to see it not be a meme. Prove me wrong and win Worlds and I will write an article about how you were right, buying 4 Recusants WAS a smart idea. 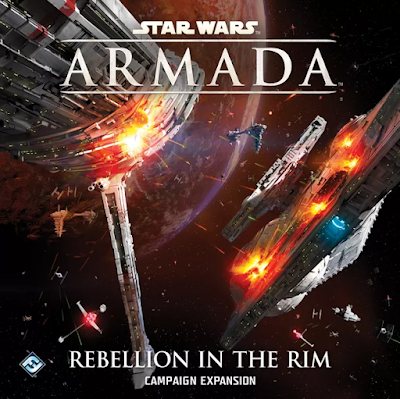 For BOTH factions, you're likely going to have to buy Rebellion in the Rim AND Corellian Conflict if/when you get REAL competitive because they are the only place to get the objective cards that you're going to run outside the starter 12.  You CAN win with the basics, but why cook with only salt and pepper when you can get cumin, garam marsala, and chili pepper? Now if you'll excuse me, I need to go get some takeout Indian food after THAT metaphor.  Good luck getting into your new factions!
Posted by geek19 at 11/13/2022