Geek again, in my traditional blue. I've been able to get noted podcast host Fox "Left Foot of Space Cthulhu" Omega to write up the C-ROC Gozanti article.  He will be appearing below in orange, and anything I add will be in my blue, as always. On with the show!
If you were one of those people who was screaming “Separatists deserve another small!”: Firstly, please stop shouting, and secondly, look no further than the C-ROC Gozanti-class Light Cruiser! A welcome addition to the CIS armada thanks to Rapid Reinforcements I. The basic stats of the chassis are essentially the same, but there are also some significant differences that allow you to build some wacky things, so we will touch on that in a bit. Onward! 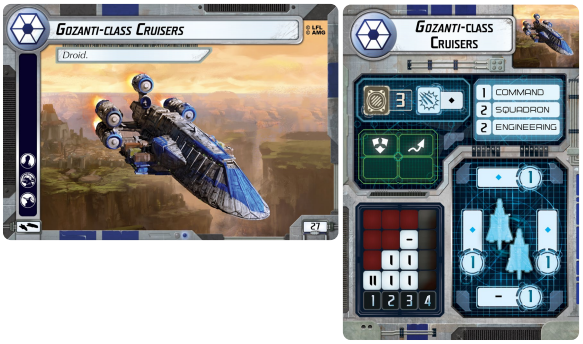 Quick reminder on flotillas and how they operate in the game. Flotillas have 4 special rules that apply only to them:
These Gozantis are identical to the cruisers (cheaper variant) from the Imperial faction EXCEPT for their upgrade suite and price (Drive 'em like you stole 'em!). For a 5 pt increase over their Imperial twin (and a 10 pt increase over their rebel cousins), we are losing an offensive retrofit and fleet support and gaining a weapons team and ion cannon. I will pause while you take that information in… You read that right, this tiny little guy is built for PAIN. The Imperial article has some general considerations when flying cheap little flotillas, so John is going to hook me up with a link HERE. I’m going straight into considerations within the context of the CIS. Here we go!
Basic Usage Recommendations/Commander Considerations

This thing is already pretty expensive, so some general guidelines on usage within the faction:
Before you start strapping them in and loading them up with upgrades, almost every commander brings an additional consideration into the mix, especially when including the upgrade suite available to the C-ROC:

As mentioned, Grievous doesn’t hate the idea of a flotilla absorbing shots and ultimately benefiting the bigger activations.  Or letting a scatter return when something ELSE dies in its stead, comma, ugh.

Kraken can have big plans with the Gozanti acting as a spotter OR holding an ion crit of its own. More to follow.

Trench with Tikkes on the Goz makes an excellent squad pusher. Definitely one to consider.  Especially as Tikkes can give the token for the Trench dial and token while the ship itself does something else.  Go crazy!

That weapons team slot can make some people sweat in a TF-1726 fleet since Ordnance Experts is around. A 31 pt ship throwing 1 blue 3 blacks with a confire and 2 rerolls? That becomes a priority really quickly.

Mar Tuuk doesn’t help at long range, but a Gozanti that can throw 5 dice with a double arc again presents some target priority issues for your opponent.

What is important to understand, regardless of the commander you take or function you choose for it, the CIS Gozanti was intended to be a distraction. A red herring. That bag of sand Indiana Jones uses when he takes the actual valuable thing (It's a fertility idol, and YES I knew that without looking it up). Separatists don’t have many robust options in their faction. With sufficient pressure, Recusants, Munificents, even Providences will fall in short order. A properly kitted Gozanti that is worth just enough points and is just dangerous enough either in guns or squadron pushing capability can distract an opponent for 1-2 shots, giving your other ships the time to evade a critical arc, line up a critical shot, or repair those critical shields. Gozantis, more than the flotillas from other factions, are intended to fall on the sword while executing their primary directive so that the rest of the fleet can execute theirs.
So, when flying a C-ROC, the goal can at times be to tug at the fishing line for a Venator lining up a shot on your Patriot Fist. Sometimes it’s landing at long in the front arc of an ISD-II while your Hyenas also bomb the front arc, creating a nasty choice for that player to either flak the dangerous stuff, or attempt to grab your Gozanti. Sometimes it’s setting up a nasty double arc with your Providence and blocking the only escape out of that shot with a Gozanti.

Flying a Separatist C-ROC like an Imperial Gozanti is a mistake. C-ROCs do not provide support for the fleet by staying at long. They don’t have the capacity to command squads at long range with Boosted Comms. They can’t pass tokens at distance 5 with Comms Net. They can’t have Bomber Command Center and stay at distance 5 from danger. A LOT of their value relies on being at medium range of their chosen task: squadron pushing, crit delivery, etc. So learning the maneuvering chops to get those Gozantis into the most annoying, target priority confusing spots possible is the name of the game.
Builds/Upgrades
Because these generally shouldn't be overloaded with upgrades, and there's only 3 slots and no title, we're combining this into one section because it isn't worth breaking down individual sections unless they're worth mentioning in a specific build.
Dwayne “C-ROC” Johnson
Tikkes

Cheap(ish) at 29 pts. Can push 3 squads at the drop of a hat. Can step on it/slam the breaks when trouble arises. Can Concentrate Fire dial+token for an annoying amount of damage on a ship or squadron. Along with all the benefits of having a flotilla in your fleet for blocking/activation padding purposes. It’s the actor that can appear in any movie and get some work done. Side Note: If you are planning on using Dwayne to push some squadrons, namely Vultures, I would NOT recommend adding Flight Controllers to the mix. I know it is very tempting, but pushing 3 Vultures doesn’t reach enough anti-squadron damage to guarantee a severely limped response from your opponent’s squadrons. Vultures are very fragile, and you will want to make sure you take something off the board before your opponent goes. 3 doesn’t cut it. So instead of pushing your Gozanti to 35 pts for a lackluster squadron push that will end up getting 24 pts of Vultures and 35 pts of you killed, just stick with cheap Dwayne, pushing bombers or a few cheap clean up squadrons after a bigger alpha strike.

Careful with this one. Kraken loves the cheap blue crit delivery system, but you need a very good reason to take one over the 5 pt line. MS1s and ICBs are so annoying, are on a 32 pt or less vessel, and will do work in almost any meta. OLP, HIE, and NK7s cross that 35 pt threshold where it isn’t a dilemma to consider popping that flotilla at medium range. It’s important to remember that blue dice are the devil for flotillas with their fragile chassis and absolutely critical-for-survival defense tokens. You have to balance the target priority aspect of the game and have many other targets for your opponent to think about before you add in the more premium blue crits. Still super fun though!

Planning on going with heavy squadrons in the CIS? You’ll want to keep them alive for as long as possible. Maybe think about having a Gozanti escort 2-3 Belbullabs and 3-4 Hyenas. They will have to be addressed by your opponent’s squadrons, but if they shoot the Hyenas, they get counter 3 and some nasty Belbullabs recourse and flak back. If they attack the Belbullabs, their shots may not even land. A truly annoying combination.
Keep it simple, keep your other ships safe! The C-ROC!
Posted by geek19 at 9/06/2022