The Adepticon Write-Up Part II: Who's the Bossk

Well, I promised I would do it, though it's taken some time. Let's find out how this whole thing went down! (I'm aware the formatting isn't great, but hey at least you can read it?)

We ended up having about 30 odd players for the event, which was more than I hoped for.  I'd honestly figured I'd be doing this for me and the 10 friends I could coerce into playing it, but no, dang near full up.  Our winner ended up with 65 tournament points, which uh, well...... take that Top 8? You got outscored that day? It was a 3 round tournament, with things getting wackier and wackier as the rounds went on.  I'm not sure if that made things MORE competitive or LESS or what have you, but hey, live and learn.
Round 1 went as normal; commanders were randomly drawn and games happened.  Round 2 things got weird as, uh, dang near everyone decided that they wanted ME to draw their commander.  And as for Round 3, I let it be a reverse (current actual) tournament score draft for commander of choice.  So whoever had the least points got to call their shot and pick their commander, going up the bottom ranks until we had assigned them all to everyone.  I got that idea from Jack, and I definitely would re-do that aspect going forwards.  Way more fun for a goofy tournament for sure.
As for the lists and what I saw, there was much jank to be had.  Admiral Theia brought a full complement of Z95s and the ships to push them, the angriest anthill.  I saw 2 Gauntlets in use, for real.  Sadly, that guy didn't choose TF-1726 round 3, but ah well.  There were, if I'm remembering right, 3 different SSDs.  I saw Ezra steal one of a set of dual ISDs, Madine driving Arquitens MSU, Garm and Bail SSDs, a Raddus Providence (before it was legal!), and an Agate Onager.  Very goofy fun and I think* everyone had a good time.  There was a complaint or two afterwards, which I'll address at the end, and you'll see why.
I figure I'll start with a FULL list of the achievements you could have achieved had you played.  As I break those all down, I'll give my thoughts on them and whether I'd include them going forwards if/when I do this again. 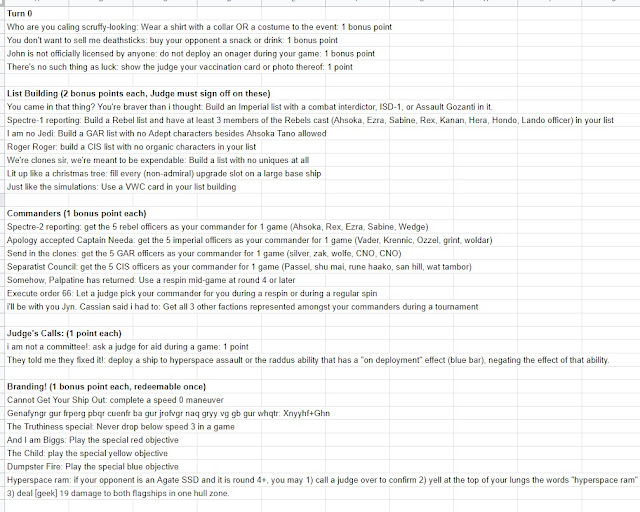 Let's go section by section, huh? (I also have a copy I'll try to make available offline if you email me for it).

So these first ones were just the start of the goofiness.  The collar or costume are from the fact that I suit up for most tournaments; I also wanted to reward anyone goofy enough to do the same.  Buying your opponent a drink was trying to foster good sportsmanship and oh wow so crazy how you could both buy each other a snack and it would give you a bonus so weird not gamed at all and definitely not the point.
The "don't deploy an onager" was definitely because this was janky and stupid and a goofy event, and "hey look you're getting shot turn 0 by a ship when you haven't fully figured out your commander woo such fun."  Comments about the competitiveness and fairness of the ship belong elsewhere, but I didn't want anyone signing up for the goofy time and then hitting 3 onagers in a row.  "Why didn't I nerf the Hawk as well?" Because without Agate it kinda stinks? If you're willing to play like a Tagge Hawk or whatever, more power to you dude.  But the Onager's problems aren't commander related, so that's why it was the only one hit.
And the vaccination card? Get vaccinated you clods.  THAT IS the nice way of saying that.  Moving on.

Going one by one:

Lastly we hit the "no dice modifications" bits.  Again, these were intended to reward people for never modifying their dice.  But as was pointed out to me mid-round 2ish, you technically (based on my poor wording, womp) can do all of these in one game.  As it was mid-game in round 2, I couldn't really go back in time on these (for anyone who either did them in round 1 or had started attempting in round 2).  A LOT of high points came out of this, especially for everyone that got, what, 10 in one game easily? If anyone else does this, please reword it and let me know what you get out of this.  I think this can be VERY amusing, but I don't believe it's perfectly fixed.  I love the concept and you can very much expect this to return the next time I do this.
If you guys have any followup questions or want further clarification, please let me know!
Posted by geek19 at 5/01/2022