SSD teaser article is up!

Just in case you somehow missed it:
https://www.fantasyflightgames.com/en/news/2018/8/3/executor-arrives/

That said, there's not a lot of meat there beyond some items FFG already teased. We did get some details on the cheapest Spaceball One Super Star Destroyer available: 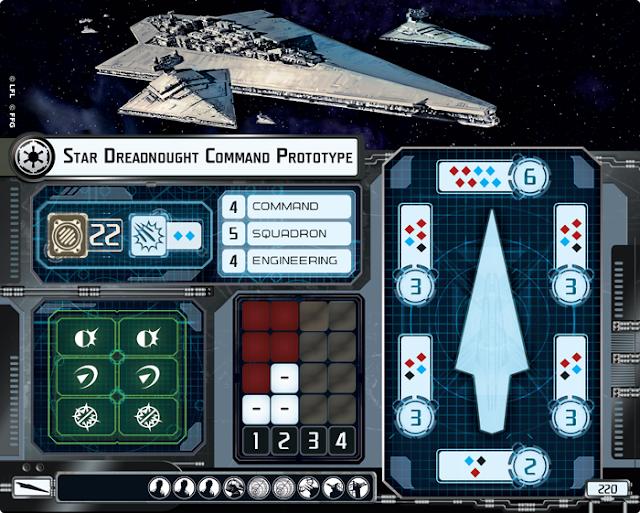 What we see here are 6 total hull zones, an 8-dice front arc, and several lesser hull zones that still boast a respectable number of dice. We can see a very high (but for 220 points...) Squadron value of 5 and the first incidence of Command 4 ever in Armada. It's also not a star destroyer, but a star dreadnought, so no using Seventh Fleet with the SSD!

It was also spoiled that all SSDs come with a "pass" token, which works like a Strategic Adviser, but doesn't consume one of the three(!) officer slots. It also generates a command token whenever it reveals a dial, matching that type. Neat. Speaking of 3 officer slots, there are a lot of neat combos that previously were impossible which now can be done, or at the very least some appealing "also ran" officers that regularly get left behind which may not any longer: specifically, I'm thinking of Damage Control Officer (double contains, oh yeah!) and the rarely-seen Liaison and command-focused officers, which are a lot less painful to use and more appealing on a Command 4 ship. Command-fixing officers are likely going to be a necessity with Cham Syndulla and (to a lesser extent) Slicer Tools out there, threatening to ruin your day.

We can also see a low max speed and nonexistent yaw. If you want to turn this thing, you'll need nav dials and/or Moff Jerjerrod.

I'm going to strongly predict that the weapon team, ion cannon, and turbolaser slots will all effectively be spoken for with specific upgrades you need a good reason not to use:
The duplicate braces and redirects leave me with the impression of a ship that will be more durable against "super attacks" from ships that can guarantee an accuracy or Intel Officer a single defense token, although it lacks a redirect. In general if this thing is going up against, say, 2 ISDs, it may very well come out on top due to requiring lots of accuracy results to stop it from using high-impact defense tokens. That said, the side hull zones are not terribly high in shields, so it will depend substantially on which hull zones are pointed at which enemy hull zones as well as a host of other variables before I could say which would have the better end of it.

We also got our first look at commander Palpatine:
Palps McGee is effectively a specialized Intel Officer for your whole fleet, which is really cool. It remains to be seen exactly how best to leverage this ability (likely with fleets that aren't generally producing a lot of accuracy icons, I'd think, perhaps in addition to regular Intel Officer if you really want to turn the screws), but it's potentially very powerful. Something of note is the ability also works on ace squadrons! I foresee a lot of round 2 evade, round 3 brace, round 4 redirect Palpatine combos going on, with scatter potentially in there if some aces or flotillas really need to go down.

Given he's packaged with the SSD, he's an "easy" upgrade for a big fat ship that wants all three(!) of its attacks to count, but it may not necessarily be the strongest use for him. What's interesting with Palpatine and a more conventional bomber fleet, let's say, is you can choose redirect once your bombers start going to town on ships and find your bombers hitting hull much earlier than they would otherwise, which if combined with other "chip" damage, like that from Arquitens or Raiders or the like, can really add up.

Final thoughts
There's still a lot we don't know just yet, so there's a lot of conjecture on the SSD in general, much of which will quite likely turn out to be incorrect. That said, it's very exciting! We'll be waiting for a while for more substantial teasers as we get closer to Q1 2019 I suspect, so patience is going to be necessary.
Posted by Eric Taylor at 8/03/2018