So John's article is out there and I dallied a lot writing a super-article, only to decide it was probably best to divide it into two parts. So here's the actual Gencon report, post-Gencon thoughts will be its own separate thing.

John and I went, and he wrote up a big Leia article on his experiences. He did very well, coming in 7th out of 34(?) people. I came in right behind him at 8th and had the honor to hit top table for round 3 against Cliff and was still holding steady at table two for round 4 and got trashed by Dong Lee, who made it to finals (congrats, Dong!). I'd love to write really detailed reports on my games, but I was operating on five hours of really bad sleep (our hotel situation was terrible is the really short version of a long story) so I'm afraid short summaries will have to suffice. Sorry, my memory of the specifics of the games is already rather poor. Next year (hopefully!) when I get enough sleep in a not-crappy hotel before the event, I'd love to do a better writeup.

I brought the same fleet I took to Worlds because despite beating my head against a few Imperial builds since Worlds I just haven't found something I feel better suits me on Team Triangle just yet. Sorry, guys. I should have another two months or so at least of more casual games ahead of me now and I hope to figure out something Imperial because this Rebel stint has been going on a lot longer than I expected (and I'll talk about that a bit more later in the post-Gencon thinkpiece, the short version is it feels like Rebels have a lot more fleet building options than Imperials do right now). As a reminder, the fleet is:

Game 1 vs Shon
Shon was running a Sloane fleet with Demo, Avenger with Strategic Adviser, 2 flotillas, and most of the usual suspects squadrons. Shon and his crew all worked in a law office in Seattle (...I think. Again, see the aforementioned 5 hours of crappy sleep) and they were a good group of guys. Unfortunately for Shon, they had a few incorrect understandings of the rules (which were addressed politely during the event and everyone was chill about it) which we ran into during our game which caused some problems for him, but he handled it really well. Short version is more standard Sloane doesn't like Rieekan MSU; Sloane's squadrons don't kick out enough damage quickly enough and small ships that were already going to get crushed by an Avenger ISD don't really care if their tokens get messed with before they get swatted down and turned into zombies, usually trapping the ships in place to get beat on by several ships. I tabled Shon and in return he took out the Most Wanted GR75 (he really wanted Slicer Tools off the board) and I believe two Hammerheads.

Game 2 vs. John Thomson
John Thomson is actually a fairly new addition to our Fair Game crew, having joined us after his local store went under (the owner ran into some serious medical problems, it's really sad, honestly 😢). The funny thing is we'd never actually played one another because he frequently got in earlier than I did and grabbed a game with someone else. There's a first time for everything, I suppose, but it seems odd to me I keep getting first games against Chicagolanders at major tournaments.

Anyways, John was running a fleet pretty similar to the one that took 4th at Euros: Thrawn, a Kuat ISD, a Demolisher Glad-II, 2 Gozantis, a bunch of TIE Bombers and some support, and Ruthless Strategists on the combat ships. He was sad to see a fleet with no squadrons. I was sad to see a squadron fleet I couldn't disrupt too much with Slicers - the best I can really do against Thrawn squads is give ships superfluous squad dials, which helps but doesn't really stop the squad command from happening.

We played Contested Outpost and I was a bit cagey, holding back to not really commit strongly until round 4, given Pryce was set to round 3. John took the outpost 3 rounds, we tied it for one, and I took it on round 5 when I tabled him similarly to Shon - Rieekan MSU does really well against squad-heavy fleets by just focusing on the combat ships. I believe John took out the cheap MC30, the GR-75, and a Hammerhead. 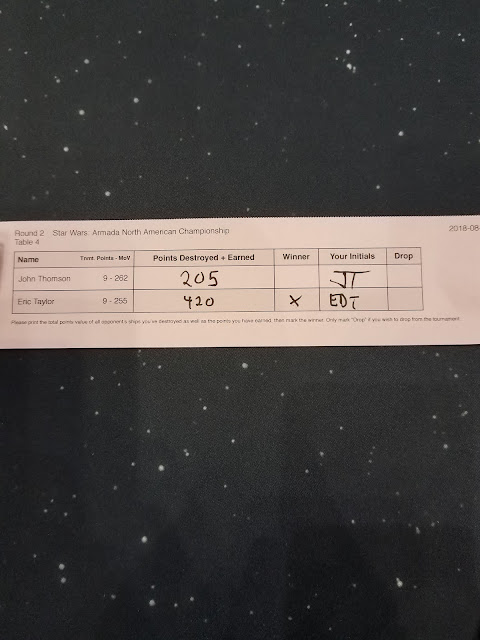 Game 3 vs. Cliff
Cliff is another Fair Gamer (why did I come out to Indianapolis to play all my local players? 😅) and he was using a more modified form of the Thrawn bombers archetype John Thomson was using. He had an Avenger ISD-II with Strategic Adviser, Quad Turbolaser Cannons, other usual ISD-II stuff, Demolisher Glad-I, 2 Gozantis, 4 TIE Bombers, Jonus, and Dengar.

I was first and we played Most Wanted. He put it on Rieekan's MC30. During the game, I was able to box him in and table him by the end of the game, but he was able to get both Rieekan's MC30 and the regular MC30 as well as Jaina's, bringing the margin of victory down. He had some very hot (just barely finishing off Rieekan's MC30 and just barely getting the other MC30) and cold (TIE Bombers without Bomber Command Center loved rolling blanks at inopportune moments) dice rolls, I'm not sure exactly where I'd value luck as a factor there as it seemed to strongly go in both directions. 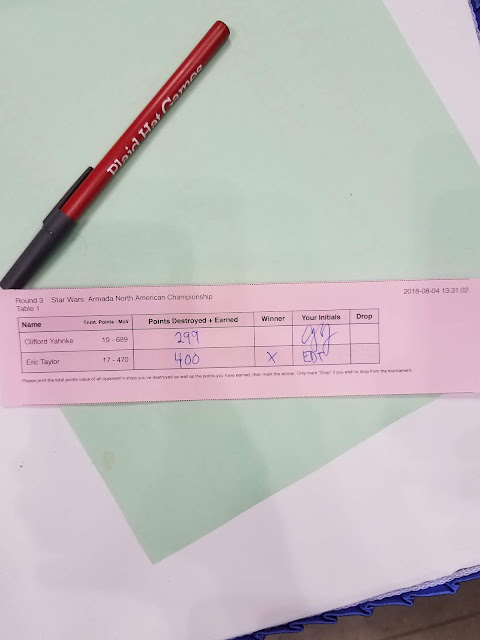 And chose to go first.

Short version: I got crushed. I was mentally hitting a wall from the lack of sleep, I deployed poorly, Dong was on his game better, and some great rolls and close maneuvers (Demo just getting into range of Jaina's and then getting 6 damage from the front arc and the APT crit that prevented me from using exhausted defense tokens, which made me dead meat against his squads where normally the redirect might have kept it alive just a bit longer, for example). I was hoping to pen in and remove his ISD to at least have a close loss but it barely got away from the cage and the game was pretty much sealed at that point - I couldn't get the remaining 6ish damage I needed into the ISD with only one redirect remaining. Womp womp 😞. This isn't to say "oh yeah I totally would've taken him if things had been different," moreso "I would love a rematch some day under hopefully less sleep-deprived circumstances." Dong was a good guy; sorry I was sleep-deprived and a bit grumpy, Dong.

The good news is I got to go home to sleep in a real bed that evening instead of trying to figure out what I was doing about rooms in Indy on Saturday night to show back up for play by 8AM the next morning, so that's the silver lining. 8th out of 34 ain't bad at all, and neither is 3-1 at Gencon.

Behold Ian perched atop many tables!
Ian Cross, as always, did a fine job as judge. Due to the size of our tables, Ian occasionally needed to climb tables to make calls on range and arcs and whatnot. I vowed to capture as many of these moments as I could, and with help from Mike Bohlman for the final picture, I succeeded. I present to you: Ian on tables, a play in 4 parts and occasionally from different perspectives. 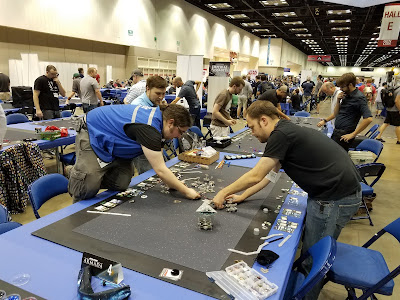 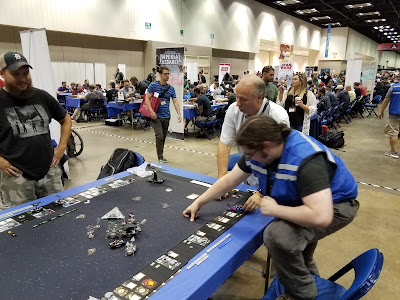 Cliff's game (Cliff at the end in white) 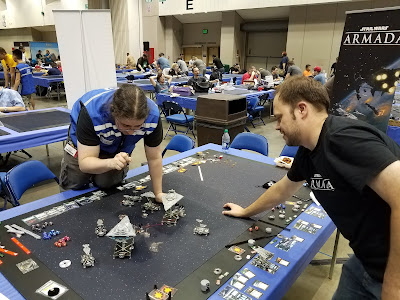 Another call in a game with Justin. Justin, why are you so troublesome? Ian's knees are suffering for you! 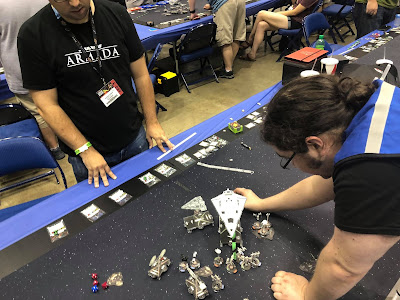 Nick Griffiths requires Ian to get creative with the range ruler.

And that's the wrapup! I should have the thinkpiece out tomorrow, maybe even later tonight.
Posted by Eric Taylor at 8/15/2018