Where Do We Go, and Why Do We Fight?

So instead of fixing any of those articles like I mentioned, I'm instead first going to do something slightly different.  These are just a few things I wanted to discuss, and since, you know, our blog, I get to do THIS first before moving back into updates and all.  They're all rather short, so they don't need individual articles.  Since they all somewhat relate, you get this amalgam of thinkpieces.
1) Squadron Builds
So, as we all remember from a few weeks ago, there was a minor, tiny, eeny-weeny, itsy-bitsy little nerf that only SLIGHTLY upended about a few.... hundred thousand squadron lists.  Eric and I were and ARE in favor of the nerfs (see that article, again).  But what does it mean for squadron lists now?

Before the nerf, flotillas were everywhere.  With a hard cap now of 2 and the Relay distance, squadrons are no longer able to attack you from far away from any ship, unable to be meaningfully fought.  Keeping all THAT in mind, losing all your non-flotilla ships results in you being tabled.  You can have about 180-200 points left on the table and lose them ALL in one turn if your other ships go down.  Combine that with the fact that Yavaris and Gallant Haven took one in the jimmies during that nerf and that Eric and our friend Nick (who ran double ISD day 1A and got 3rd place) proved that running squadronless IS viable, what happens NOW?

Well, squadron builds need to do a full reset.  You can't run the Yavaris-Gallant Haven-and-three-flotillas anymore in a tournament setting (the 2+3, where the first number refers to the number of non-flotillas, and the second number the number of flotillas).  You can't run an ISD and 4 flotillas, either (1+4).  The thing I liked about the nerf is that the 2+3 was a very dominant Rebel build (it won Worlds last year, for crying out loud!).  In fact, when I was prepping for Michigan, I was trying to find a way to play squadrons that WASN'T the 2+3.  But it was the most dominant build, and it was why nearly every part of that list got hit with the nerf bat.
Given the options and all, running anything before BUT the 2+3 wasn't as strong as JUST running the 2+3.  But now? We're in a cool new place.  We saw what Nathan win Worlds with Rebel squadrons, and I have some new ideas of my own that I'm working on.  Squadrons are STILL viable, it just takes a little more work to get them going than before.  I can't claim I have it figured out, but squadrons are still viable.  What we (squadron players) need to do is rethink most builds.  You can 2+2 or 3+2, there's even ways of running 4+2. They all share their own benefits and detriments, which is great.

2) 0 to 134
So the reason I brought that up is that Eric, our friends Nick and Jack, and myself all went squadronless at Worlds.  For various reasons, we all decided that running squadronless was the right choice for all of us (Yes, even me.  I ran squadronless, Eric ran Rebels, it was a crazy time).  Nathan, of course, won it all with 134 points, the full amount you CAN bring.  Is that the new meta? Are those the only 2 options?

As always, no.  I still think (even though I need to update the articles) that SFC and MFC are viable.  My worry was that just bringing Shara/Tycho would get shot and die by Sloane squadrons without doing much of a meaningful difference in the game.  What my list had going for it is that I was able to roll consistent damage at red range, which could put a Quasar in the GROUND fast.  When I hit squadrons in round 3, I focused fire on the Quasar and went gunning for it.  I don't..... recall facing any Slicer Tools, but I do know Eric was running them.  What your list needs in some fashion is an ANSWER for squadrons slash their carriers.  Rieekan running Shara/Tycho and keeping them alive while they were stuck in the squadron blob (while the REST of your ships gun towards Yavaris/Quasar), Jan Ors, 2 X-wings, and Biggs, Slicer Tools, or heavy fast damage; they're all still methods of keeping you from dying to mass squadrons. 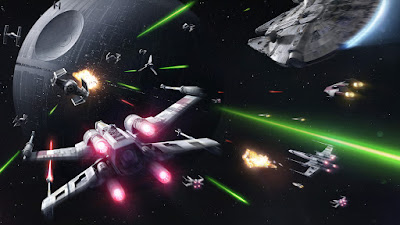 You can run whatever you want to run, and you can do well with it.  It's a matter of testing and playing and knowing what your ships and squads can do.  I don't want you to think that 0 or 134 are your only options, because they aren't.  If you have a bunch of short range black dice ships, then bring Shara/Tycho to stick in the squadron ball for one turn WHILE you gun for the carriers.  The most important thing is gunning for the carriers.

3) Re-Evaluation
And with all THAT said, and as I learned last night, there's a lot of new things to think about.  I ran Hera with some squadrons Thursday night, and holy crap is she good.  Two months ago when I could run a squillion flotillas as needed, who needed the ability to push 2 squadrons as Rogue? It was a NICE ability that sorta helped and was interesting.  But now? She's a 3rd flotilla that also fires murder dice at squadrons and a solid whack at ships in the squadron phase.  Nathan used her, YT1300s, and a Scurrg and won Worlds.  What my game taught me was that there's a LOT I need to re-evaluate in this new meta.  The reason I'm redoing a lot of the articles is that things are in flux now.  Maybe Lancers are worth it (Hi Mike!), maybe I'll run E-wings again, maybe I can get Sato plans to work for me!

I need to re-evaluate my Squadrons Encyclopedia fully, as ALL of those articles assumed a world where flotillas DID count for tabling.  Now that you can just gun for the carriers, there's a whole new ballgame about how to fight squadron lists and what you need to do against them.  I need to redo a LOT, and I need to reconsider ships and their roles and upgrades somewhat in order to figure out if some new things are viable or not FOR fighting carriers or preventing their deaths.
At Worlds, I heard from Brooks, one of the FFG guys, that EVERY ship was on the table the 2 days of Worlds.  A Pelta hit top 4, a VSD-I was in the running day 1A, and several people were running Arquitens and Hammerheads.  Ships that people may not normally consider "top-tier" WERE there at the top, running well and getting kills and wins.  Again, I'm going through all the articles I can, seeing what I need to update and all.  It'll take a bit of time, but I'm working through them all.

4) My Opinions and Feelings and Why I Fight
And here's where we bookend this.  One of the things I'm vaguely known for on "the forums" and on here is that there's very little I consider "bad."  I'll disagree (and probably more vehemently than I should, haha!) with people that tell me X ship is bad or Y ship isn't good.  With some notable Konstantine and Tagge-based exceptions, I DO think that almost everything is viable.  I'm a strong proponent of running Commander Leia, even though certain members of another blog do not care for her.

(They're WRONG, of course, because I say so, haha. Come to GenCon and watch me play shmitty and we can see who's right and who's NOT playing Leia!)
The reason I'll disagree with people about X or Y isn't that I necessarily think something is GOOD or BAD.  I have my own stupid opinions and all, which I generally leave on the forums (and try to keep somewhat out of here, haha!).  What I don't want is that I don't want people to see someone on the forums say that X ship is bad and then agree with them without trying it out.  Sure, VSDs aren't the easiest ships to get.  I'll fully agree with that.  But I want you to try something out before you say you don't like it.  Kinda like how you have a kid try his vegetables before he says he doesn't like them.
One of my fears with me saying a ship or squadron is "bad" is that you're not going to test it out and see if you agree with me or not.  And then the game can stagnate, when all you see across the table is the same 5 ships/lists.  We had a local who tried Hammerheads once and didn't like them, so he was a little bitter way back when that "he didn't get anything in wave 6."  But after seeing Eric's success with them at Worlds, he's starting to come around on them and try them again.  That's the other reason I liked the recent FAQ/nerf.  It opened up a whole bunch of viable builds; I hardly ever see anyone running identical lists any more.  They're ALL good ships, Brent, you just need to know their role.

So let me say it again, one more time for the people in the back: right now, potentially everything and anything is viable.  You have to learn how to use it, and use it properly, which is where I feel WE come in.  I feel a large part of my job on this blog is to offer you some basic advice on whether or not something is workable AND the best way TO make it work.  I don't personally care for some commanders (even on the Rebellion side!), but I can acknowledge the playstyles that would.  If something just ISN'T good (in my opinion!), I'll tell you, but I'll also tell you the best way TO attempt to get it to work.  Your mindset/playstyle is probably different from mine, so your natural cagey-ness could result in you getting way better use out of some of these defensive upgrades.  Or, your standard inclination to attack as fast as you can could result in you having more success with Cracken than I would.  Keep in mind, as always, that my opinion ISN'T gospel, but it's the best I've got with the experience I have, haha.

I try mostly to be positive about a lot of things on here.  There are some ships and builds that I don't personally care for, but potentially in the right fleet with the right upgrades.... I believe anything CAN be good.  And I want you to believe that too.