So as I mentioned yesterday, John and I participated in the two-round Adepticon tournament on Friday. We started at 3:30PM and got done at 9:15PM and back home (John's crashing at my place for the weekend as I live a 30 minute drive closer to the event than he does) by around 10 and then collapsed. So sorry for a short delay. First things first, I won the event! I talked about how two-round events are a bit weird and I still feel that way, but it always feels good to do well. Still a kind of weird format, but I get why it is that way - Armada tournaments of 3 rounds (and sometimes 4) take up a lot of time and many Adepticon attendees want to play other games too. Therefore a shorter format makes sense.


I won't reveal my fleet list just yet, but suffice it to say I continue my love affair with Raiders. Both fleets I faced went heavy on squadrons, and good use of TIE Fighters and 2 Raiders was essential to not getting swarmed by angry bombers.

You may note from the standings above that it was an 18-person event. There was room for more, but we had some no-shows (starting with #19, the awesomely-named Bryan Force; I forgive you Bryan, and your amazing name). That's not unusual for Adepticon events where people will sometimes sign up for events with some overlap, thinking that if they want to drop from event A towards the end of it if they're not doing great they can then go do event B. 18 people isn't the biggest Armada tournament I've done (that was last year's 3-round Adepticon tournament with 33 people), but it's definitely not too shabby.

I also want to congratulate my Armada-bros at Fair Game in Downers Grove. Our community has been growing and becoming more competitive - of the 18 players on Friday, 7 of them were from Fair Game: Me, Michael "Plot" (not his actual last name, there was a mix-up), Philip Mak, John Zuidema (my partner-in-blogging), Travis Pearson, Nick Litrenta, and Matt Harbage. Of the top 50% of players by the end of play Friday, 5 of the 9 were Fair Gamers. Great job, everybody!

John reminded me to give a shout-out as well to Alexander and Mark, who read Cannot Get Your Ship Out (hello!) as well as Jimmy, the FFG employee who also, to our great surprise, reads Cannot Get Your Ship Out! It's always fun to meet folks in meatspace and John and I are always pleased to find something we've written has helped somebody else enjoy the game more. Jimmy was a blast to talk to, was very excited about Armada, and discussed a number of minor things with us (we couldn't get any wave 6 information out of him, haha) that were interesting. Also Scott the judge, thank you for your good work. You were level-headed and your enthusiasm for Armada was clear. It was a great event and a great crew.

I'd like to commend Gabriel Miller on the first game - Gabriel, you were a super-cool guy, I had a good time playing you (it was an Ozzel vs. Ozzel cat-and-mouse game of "no, you pounce first"), I really enjoyed our hour-long chat afterwards, and you accepted a 10-1 loss with aplomb and total chill. My round two opponent (who shall not be named) went on tilt pretty much from the moment my Raider rammed his GR75 on turn 2 and it pushed my respect for Gabriel from "what a great guy" to "he must truly be a god amongst men." So Gabriel, if you're ever visiting Chicagoland from your home in Kentucky, drop me a line and I'd love to get in a rematch and introduce you to our local players.

Beyond that, I just wanted to share some pictures of Adepticon.

Up next, just a smattering of the vendor hall - there's about 200% MORE stuff than I took pictures of when it comes to stuff you can buy. 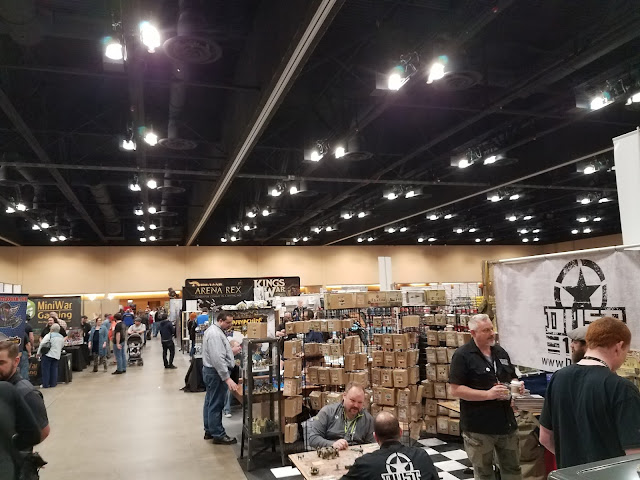 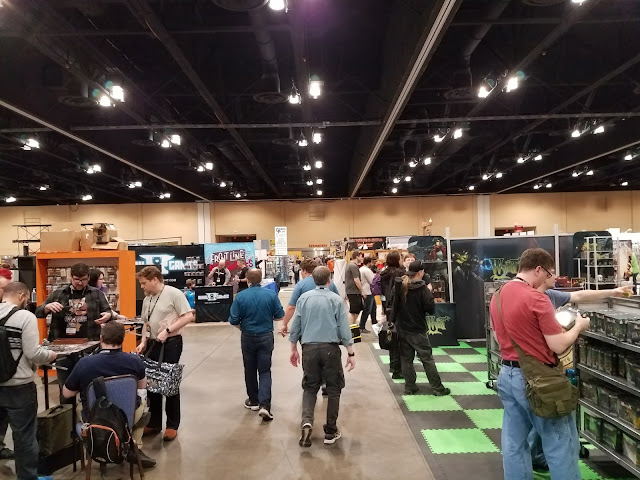 And finally, just the huge FFG play space. Most of it X-Wing, but a little free-to-play Rebellion (great 2 player game!) and a handful of Armada and I believe some Imperial Assault as well. 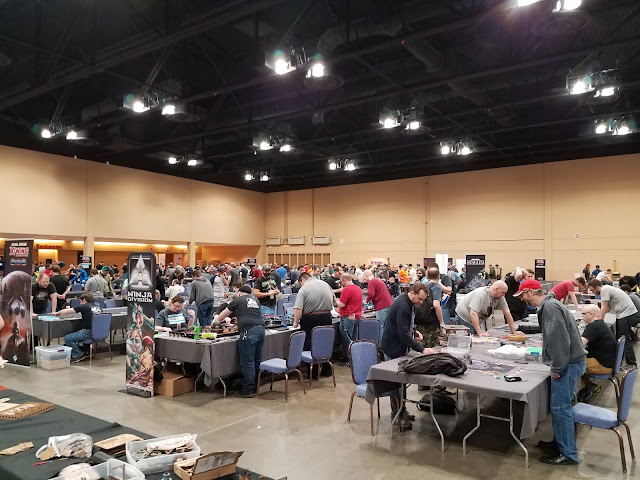 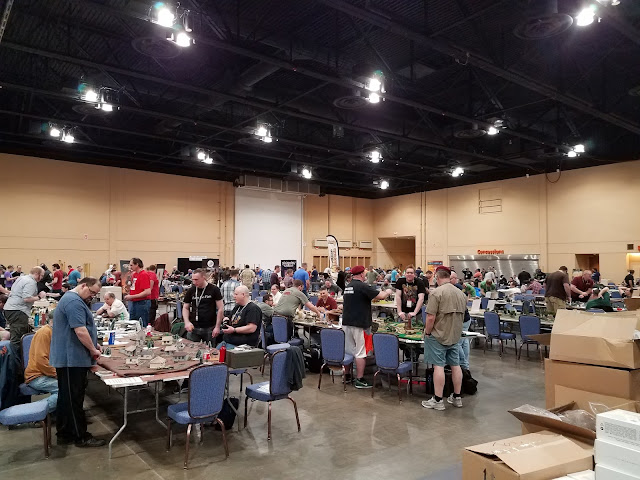 Oh, and Eagle Ordinary has a fun little booth that is handing out 40K-themed coloring books and other fun things. I got out of 40K long ago, but the webcomic's sense of humor makes me a big fan. And I got this cute Junior Commisar Talon chibi sticker, because I'm a grown-up and I wanted a sticker!

That just about wraps it up! If you had any questions, let me know! We'll be heading back in for the Sunday Armada tournament tomorrow and I'm sure we'll have some updates about that later too.