Shorter update on this one as I'm beat:

John and I and 4 other Fair Game participants arrived this morning around 9:30 to get our Armada on at Adepticon. Of the 20 participants, we made up 30% - pretty good! I still feel a bit weird about two-round events, but we had a good time. 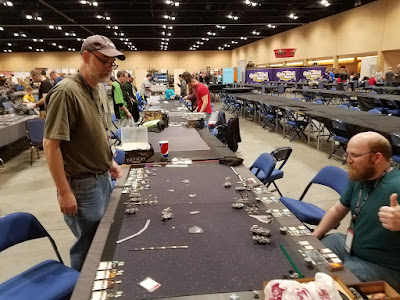 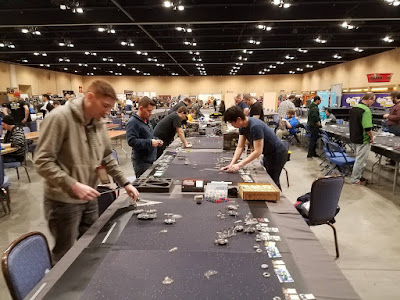 Here's the fleet I brought both Friday and Sunday:

The 16-point bid ended up being overkill, but I wanted a 95%+ chance of getting the initiative to go first. It worked out great - I won all 4 games I played between Friday and Sunday. It's quite fun and I'm pretty happy with it but it takes a lot of practice to get the hang of because you live and die by your speed management, activation order, and maneuvering. It's not a very forgiving build, which is one of the things I like about it! Also those 2 Raiders were champs! 3 of my 4 games were against fleets using 100-ish points of squadrons and between the 6 TIE Fighters and the Raiders pulling some when-necessary flak duty, I won the squadron mini-game in every one with a few TIE Fighters left standing at the end.

Both my opponents today/on Sunday were great guys, 10/10 would play again.

Round one was versus Greg. Greg was bringing a Dodonna fleet with a strong fighter wing (HMC80 Defiance with lots of upgrades, Assault Frigate, GR75, 4 X-Wings, 4 Y-Wings, 1 A-Wing). I was able to get the jump on the Assault Frigate and get some damage into the HMC80 before Demolisher was destroyed. Ozzel finished the job. The squadron mini-game saw him concentrate on bombing and my TIEs concentrate on eliminating X-Wings and Y-Wings whenever possible and keeping them pinned down for Raiders to beat on. That's not to say they didn't accomplish anything - Demolisher would've lived another turn were it not for some X-Wings and Y-Wings punching some of his shields in before the Defiance HMC80 finally landed the killing blow.

My second game was against Ryan. He was running Tagge with 3 Arquitens (all with Turbolaser Reroute Circuits) and an ISD-II with lots of upgrades along with 4 Interceptors. I chose Contested Outpost. I made a few mistakes - I pounced with Demolisher a bit too early (middle turn 2, I succeeded in causing an Arquitens logjam like I wanted but the extra heat the Demolisher took was probably not worth it and I thought I had set up a double-arc but did not in fact have a double-arc), I tried to ram an Arquitens to death only to find the Raider just barely overlapped Ozzel's flagship, etc. I also want to apologize to Ryan for some mistakes I made - I accidentally flipped a Raider evade when I meant to flip Ozzel's flagship's evade, and I momentarily got confused about the damage cards on the Ozzel Gladiator; thankfully the mistakes were quickly identified and resolved correctly. The only excuse I have is I did not get much sleep Saturday night due to heartburn and was not feeling terribly alert, but man I still feel bad about it. Sorry for any concern it caused you, Ryan. You were a good guy and you deserved a game free of me being confused about what I was doing. Anyways, I won that game just barely - by 4 points. There were one or two moments where the game could've really gone a completely different way in either of our favors had something small gone just a bit differently.

In the end, I was 3rd. Ryan (guy I played second game, he had one more tournament point going into the game and had a higher first-game total number of points) got 2nd. Mike "Plot" (from the last Adepticon article) from Fair Game won the event! I'm super proud of Mike - he got into Armada about a year ago and has been working diligently to sharpen his skills and he's become one of our top players. He deserved his win and I'm really happy for him. It's also great for Fair Game, as our crew won both tournaments!

John decided it was time to get some proof-of-concept "competitive for funsies" games in with a very experimental Sato fleet and was shown the error of his ways with two losses. We shall speak no more of this...

All in all a fun wrap-up to Adepticon. I hope to see some of you there next year! Once again, thanks to everyone who came out, my good-natured opponents who make it fun to push plastic spaceships around, Scott the swell judge (who confused me by wearing a nametag identifying himself as "Ian"), and Jimmy Lee from Fantasy Flight Games!
Posted by Eric Taylor at 3/26/2017