So a lot of information just got dumped on us between the new Clone Wars articles and the FFG in-flight report and the twitch stream. Normally I love poring over and dissecting every little thing we get from announcements like this but since becoming a playtester I always worry I'll accidentally let something slip I really shouldn't so I remain fairly tight-lipped. I realize that's not so much fun for our readers but that's how it be. John's in the same boat. (Also don't hit us up for secret whatever privately, we aren't going to tell you, sorry).
Regardless, here are some useful links to get you caught up:
https://www.fantasyflightgames.com/en/news/2020/7/31/conquer-the-galaxy-1/
https://www.fantasyflightgames.com/en/news/2020/7/31/protect-the-republic/
http://www.steelstrategy.com/2020/07/friday-livestream-leaked-cards.html
www.steelstrategy.com/2020/07/clone-wars-pictures.html
Pretty neat!

The twitch stream verified a few things:
Otherwise, all I can say about the Clone Wars stuff is it's cool. I like it. We can cover a few spoiled cards here: 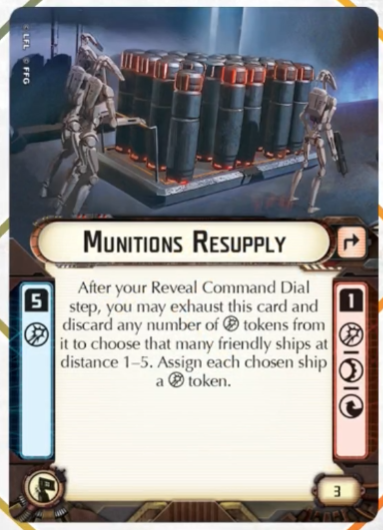 So this showcases a lot of the new iconography: the blue bar on the left shows you it starts the game with 5 con fire tokens on it. The red arrow on the center right shows it exhausts to use and doesn't refresh normally, it has a refresh cost. The cost is in the red bar below: 1 of any con fire, repair, or nav token.

Munitions Resupply is a fleet support upgrade that lets you toss out con fire tokens like candy. The main issue is there are "only" 5 of them to throw out all game and you need to eat a token to refresh the card to use it again. It's basically a very focused front-loaded Comms Net that only works for one token type, but if you need a lot of con fire tokens it's quite handy. Given we know the CIS Hardcells are getting a fleet support slot and they're more combat-focused and they are not flotillas, this can help free them up to use that fleet support slot without as much self-hassle as a Comms Net flotilla for the original factions, at the cost of flexibility. 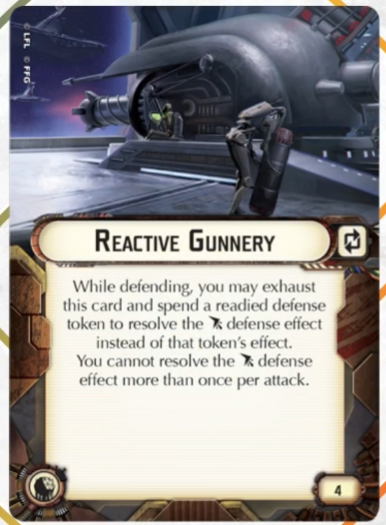 Reactive Gunnery is neat and I like it. The important thing to know about it is...
I'd expect to see this on some Galactic Civil War ships, like some Arquitens, Assault Frigate MkIIAs, and Home One Assault MC80s for starters. Maybe even some ISD-IIs. 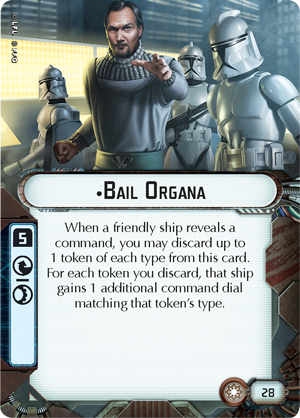 Bail is "what if discount Thrawn that is both more and less flexible?" He's best with the heavier ships and keeps those Clone Clam Acclamator navigating better than slightly speedier VSDs. Also useful similar to Thrawn in allowing your heavier ships to both command squads and navigate simultaneously so they can do what they want to do as mixed-role carriers and battleships without having to compromise. 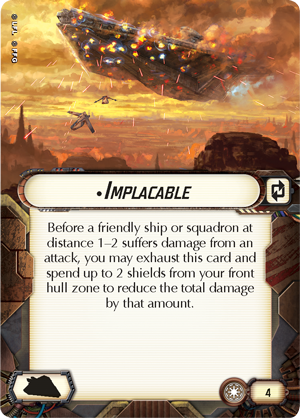 Implacable is an amazing title and you're going to be seeing a fair amount of this on your Clone Clam Acclamators. Damage reduction effects have always been strong in Armada and this is no exception. 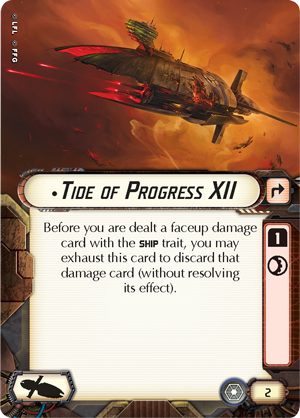 Tide of Progress is also great and probably my favorite Munificent title. Even if you only get one use out of it per game (you exhaust and then never bother feeding it a repair token to refresh) it was worth 2 points. Suck it, Structural Damage, you never happened! 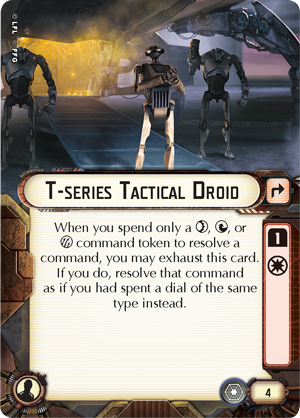 It's Admiral Piett except an officer but also a robot who is evil. And he eats tokens to refresh.

All in all very cool. I'm looking forward to discussing this in more depth as we get more official FFG material to dissect!
Posted by Eric Taylor at 7/31/2020